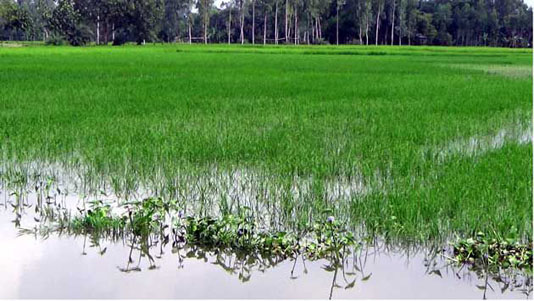 RAJSHAHI, Oct 17, 2020 (BSS)- Standing crops on around 21,210 hectares of
croplands worth about Taka 255.73 crore have been damaged by the latest flood
waters affecting over 1.43 lakh farming families in different districts under
Rajshahi division, officials said.

Various crops like transplanted aman paddy, blackgram, advanced vegetables,
groundnut, betel leaf, banana, green chili and direct-seeded aman paddy were
affected badly by the floodwater which was experienced over three months till
the end of September.

Latest official data said the deluge has affected the transplanted aman on
16,256 hectares of land, vegetables on 7,392 hectares, blackgram on 3,864
hectares and betel leaf on 25 hectares of land.

Meanwhile, normalcy has started returning to the affected areas and the
marooned people have started getting back to their normal life as water level
in many of the rivers and tributaries was recorded a continuous fall.

The flood, however, left a trail of destruction in the respective affected
areas, particularly Rajshahi, Naogaon, Natore, Bogura and Sirajganj
districts, which will take more time to get back a completely normal
situation, officials said.

The flood brought untold sufferings to the public life in addition to the
crop damaging and overflowing a huge number of fish farming ponds and canals.

Only in Shingra upazila in Natore, public assets like fishes, agriculture,
livestock and other physical infrastructures valued around Taka 200 crore
were affected by the second phase of flood, said Shafiqul Islam, chairman of
Shingra Upazila Parishad.

He said around 50 dwelling houses have been devoured amid the collapse of a
flood protection embankment in Sholakura area. In the past two phases of
flood, around 50 kilometers roads have been affected, he added.

Financial assistance and relief materials were distributed among the flood-
victims on behalf of Prime Minister Sheikh Hasina, the upazila chairman said.

The affected people will be rehabilitated after listing them as soon as
possible.

Bagmara Upazila Chairman Anil Kumar Sarker said some 13 out of the total 16
unions of the upazila have become affected.

Puthiya Upazila Chairman GM Hira Bachhu said the extent of losses by the
flood may be Taka 10 crore in the upazila.

In Atrai upazila of Naogaon district, more than one lakh people have become
affected amid excessive rising water level in the Atrai River. At least 15
houses were devoured due to collapse of flood protection embankment of Nagar
River.

Hatkalupara Union Chairman Abdus Sukur Sarder said his union is the worst-
affected among eight unions of the upazila by entire the first, second and
third phases of flood.

Shamsul Wadud, deputy director of Department of Agriculture Extension
(DAE), Naogaon said standing crops and vegetables on 5,887 hectares of land
have, so far, been damaged.

Meanwhile, more than 1.73 lakh flood-affected families consisting around
6.91 lakh people in different districts of the division have, so far,
received relief materials to overcome their livelihood related hardships
caused by the natural disaster.

The government, as part of its instant humanitarian assistance to cope with
the catastrophic situation, has allocated 1,726.1 tonnes of rice, Taka 45.02
lakh in cash, 24,030 packets of dry-food, Taka 20 lakh for baby food and Taka
34 lakh for animal feed.

Moinul Islam, additional commissioner of Rajshahi division, said
distribution of the allocated relief materials among the affected families in
the division is on final stage.

Apart from this, 2,078.9 tonnes of rice, Taka 30.46 lakh, 1,967 packets of
dry food, Taka one lakh for baby food and Taka five lakh for animal feed
remain in stock for distribution, he added. 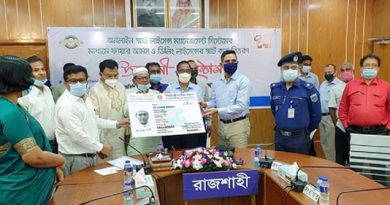 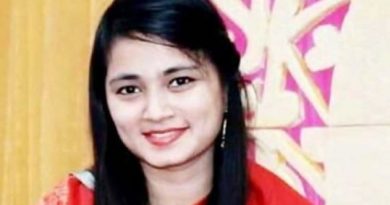 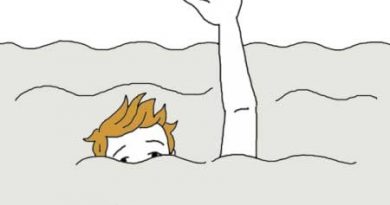