Canada’s Milos Raonic advanced to the quarter-finals of the Paris Masters tennis tournament with a 7-6 (1), 6-2 win over American qualifier Marcos Giron on Thursday.

The big server from Thornhill, Ont., had 17 aces in the match that took just under one hour 22 minutes to complete. 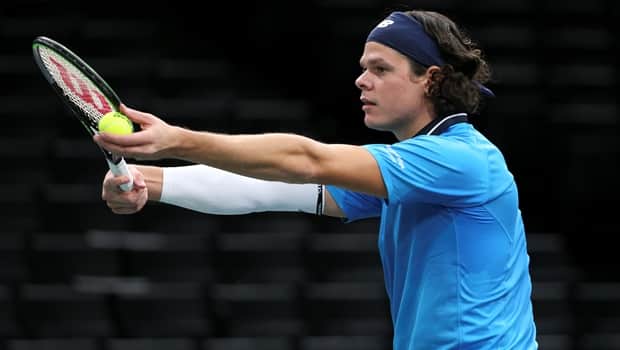 The 29-year-old Raonic, a finalist at the indoor hardcourt event in 2014, next faces France’s Ugo Humbert who defeated Marin Cilic 6-3, 6-7 (4), 6-3 later Thursday. It will be the first meeting between Raonic and Humbert.

Nadal has won 86 career titles, including 35 in Masters events, but lost his only final at the Bercy Indoor Arena in Paris 13 years ago.

Thompson found his range in the second set, hitting a couple of big winners down the line and forcing a set point with Nadal serving at 6-5. After a decent second serve, Nadal saved it after a long rally.

Thompson threw his racket onto the ground in frustration after losing the next point and Nadal’s sharp backhand volley at the net took it into a tiebreaker.

The 20-year-old from Montreal made the announcement Thursday on his Twitter feed.

While no reason was given for the split, Auger-Aliassime said he and Marx are ending their partnership “in the utmost integrity and respect for one another.”

Auger-Aliassime is 23-17 in 2020 and advanced to three of his six tournament finals this year. He is still looking for his first ATP title.

Auger-Aliassime, ranked 21st in the world, said he will continue to work with coach Frederic Fontang and the rest of his team.

Earlier this week, Auger-Aliassime was eliminated in the first round of the Paris Masters. During the match he needed a medical break after experiencing pain in his hip from a sudden movement.