Departmental action would be taken if any official or employee of Rajdhani Unnayan Kartripakkha (Rajuk) is found involved in providing residential plots to ‘Golden’ Monir in fraudulent way.

It was asserted by Rajuk chairman Sayeed Noor Alam while talking to journalists after attending a meeting of the Ministry of LGRD and Cooperatives at the Bangladesh Secretariat on Saturday.

He also said that drives inside Rajuk would be launched to stop irregularities and corruption.

According to an intelligence report, gold businessman Monir Hossain alias ‘Golden’ Monir became the owner of huge illegal wealth through dealings with corrupt officials of Rajuk. With their help, he owned 200 plots in the DIT project, Badda, Nikunja and Keraniganj areas through forged documents.

He was arrested by Rapid Action Battalion (RAB) on Friday during an overnight raid at his residence in the city’s Merul Badda.

A large cache of gold and ornaments made of the precious metal, cash, liquor, a pistol and ammunition were seized during the raid.

Besides, a huge amount of foreign currency, including US dollars and Saudi riyals, were also confiscated from the businessman’s house, said RAB’s Legal and Media Wing Director Lt Col Ashique Billah.

“Monir possesses assets worth more than Tk1,000 crore and owns more than 200 land plots at Dhaka’s Badda, Nikunj, Uttara and Keraniganj,” he said while briefing the press on Saturday.

Describing Monir as a land grabber, the senior RAB official said, “In connivance with corrupt officials, he stole official documents from Rajuk and later registered the land plots in his name. During initial interrogation, he admitted to owning as many as 30 plots through forged documents.”

In 2019, Rajuk filed a case against Monir for illicitly possessing documents of 70 Rajuk flats, the RAB said, before adding that the Anti-Corruption Commission (ACC) had also prosecuted him for acquiring wealth through graft.

According to RAB, Monir is one of the donors of a political party for the last 10 to 15 years.

Without naming the party, officials said that they were trying to track the leaders of the political party who received money from Monir. 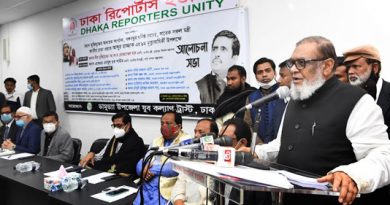