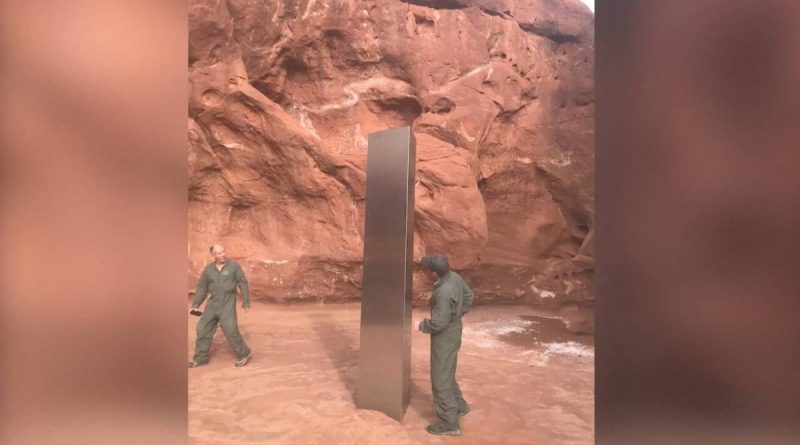 A third metal monolith has appeared without explanation in California, continuing a mysterious — though evidently human — trend that has captivated armchair conspiracy theorists around the world.

The new metal monolith was discovered on Pine Mountain in Atascadero, Calif., on Wednesday morning, in a spot that was unoccupied one day earlier.

Read more:
Another metal monolith appears in Romania, then vanishes

The three-sided, roughly three-metre-tall object is similar in size and shape to the ones recently discovered in Utah and Romania, which have since disappeared.

Got up close and personal with the mystery California #monolith today. Anyone else been out to see it? pic.twitter.com/8pOimhQiyY

California resident Gary Lyons says he came upon the new monolith early Wednesday during his daily hike on Pine Mountain.

“I guess this is a thing now, right?” he says in a brief video showing the object. “Be prepared to see these everywhere.”

The objects’ origins and true purpose remain unknown, but the sudden trend is starting to echo the crop circle phenomenon of decades past.

It’s also inspiring a similar mix of fascination, skepticism and (mostly) tongue-in-cheek theories about the supernatural.

Internet boards such as Reddit and 4chan have hosted all sorts of speculation about the objects. Are they art? Are they alien? Or are they simply pranksters trying to capture the general public’s imagination during a weird, scary and locked-down 2020?

The trend dates back to mid-November, when Utah state officials first discovered a monolith while counting bighorn sheep from a helicopter in a remote area near Moab. They revealed photos of the object while trying to keep its location a secret, but internet sleuths ultimately tracked it down using public data and satellite footage.

Archived satellite footage revealed that the Utah monument had been standing in the remote wilderness of Utah for at least four years, unnoticed by the public and unannounced by its creator.

Internet pilgrims flocked to the site shortly after its location was revealed, and news of it quickly spread around the world.

However, no one has claimed it as their own or explained its true purpose.

The object was removed last week, with one witness reporting that four men took it away. He says the men toppled the object, called it “trash” and then took it away in pieces. The group allegedly cited the slogan “leave no trace,” a conservation mantra that encourages hikers to leave public wilderness unspoiled.

The group did not claim credit for putting up the object in the first place.

The second monument was removed on Tuesday, one day before the California one appeared.

All three monoliths stood about three metres tall and had triangular bases. However, each one appeared to be put together using different — though entirely terrestrial — construction practices.

The Utah monolith was three slats of unadorned metal that were riveted together, then embedded in a slot that had been cut into hard rock. The object was hollow and the slats were apparent when looking at the monolith’s corners.

The Romania monolith was also hollow, but bubbles on the surface revealed that it was held together by a shoddy welding job.

The California monolith appears to have been riveted together and then welded along the edges to form three sharp corners.

The seemingly stainless steel object is hollow at the top and is not attached to the ground, according to the Atascadero News. The local newspaper reports that the object “could be knocked over with a firm push,” and probably weighs about 200 pounds.

In other words, they probably weren’t made by the same person.

While many have tried to figure out the monolith trend over the last few weeks, a similar game of “hide the mysterious phallus statue” has been playing out in Europe.

German police are investigating after a large wooden sculpture of a penis was removed from Grunten mountain in Bavaria. The two-metre wooden object was mysteriously erected years ago and had become a popular landmark, according to the Allgaeur Zeitung newspaper.

A phallus sculpture suddenly reappeared in place of the last one on Thursday, Germany’s dpa news agency reports.

It’s unclear why someone would secretly erect or later remove a large public statue, be it a wooden phallus or a metal monolith.

But perhaps the answer is simple: it’s 2020 and we’re facing a global pandemic. Mysteriously disappearing statues seem tame by comparison.

—With files from The Associated Press and Reuters