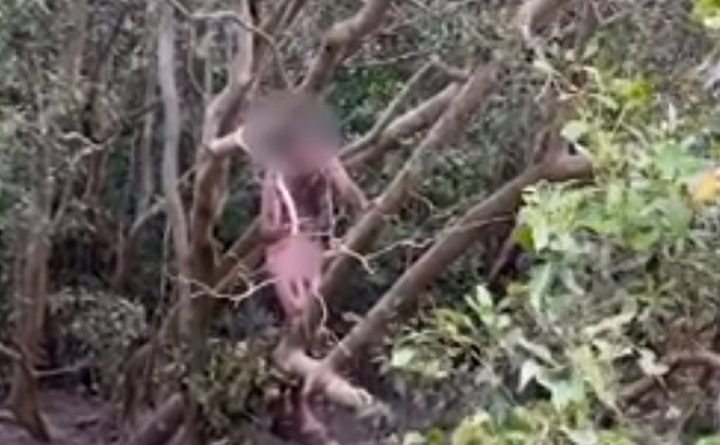 Would you rather wear an ankle monitor on bail, or hang out naked in the wilds near Darwin, Australia?

A wanted man is probably rethinking his decision to allegedly cut off an ankle monitor and flee into the wilderness after two fishermen found him hungry, naked, and clinging to a tree over crocodile-infested waters on Sunday.

The amateur fishermen say they heard the man call for help and floated their boat over to investigate on Jan. 3.

“His feet were inches away from the crocodile-infested water,” said Cameron Faust, one of the men who recorded the encounter from the boat. “He was covered in bites and scratches, and his feet were swollen,” Faust told Storyful.

The video captured Faust asking the man about his bizarre predicament.

“What’ve you been doing?” he calls out.

Faust then offers to rescue the man from the tree and call him an ambulance.

“Have you got any water in there, mate?” the naked man asks.

“We’ve got water for you, bro,” Faust responds.

Faust says he and his friend, Kevin Joiner, were initially wary of the man, but they eventually figured he’d just gotten lost after a “big night” on New Year’s Eve.

“He looked like he needed a beer, although he was in a bad way,” Faust told The Associated Press.

Faust and Joiner brought the man into their boat. Then they gave him some clothes and a beer before calling an ambulance.

The man said he’d been lost in the wilds for four days. He also seemingly got a bit too creative with his clothing, and admitted to tearing it up for “bits and pieces over the way,” Faust said.

Faust says he didn’t quite buy that explanation for the nudity. “He had a nest made up in the tree, and he was only laying a metre above the water and there were crocs in the water so he has done well to survive.”

Read more:
Real ‘Lord of the Flies’ story had a happier ending for castaway boys

Faust and Joiner later discovered that the man was Luke Voskresensky, a fugitive who was out on bail for aggravated robbery. Police re-apprehended the 40-year-old at the hospital and he will face new charges in court next month.

Faust said he decided against visiting Voskresensky in the hospital after discovering he had been wanted by police.

How the electoral college works to determine who wins the U.S. presidency