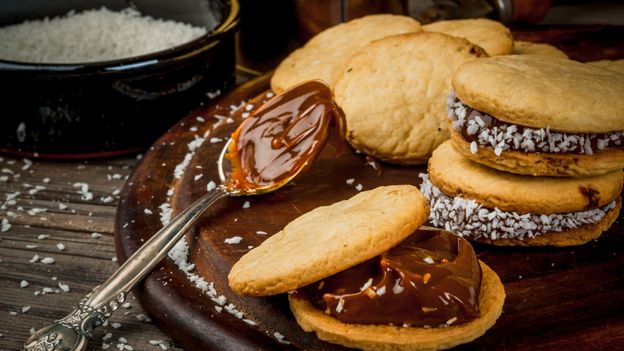 Chocolatier Maria Romero’s eyes gleamed as she drifted back to her childhood in Quilmes, a city in Buenos Aires province, and her first encounters with alfajores. “My first memory of eating them was when I was little,” she said. “We had these kioscos [small convenience stores] inside the school and would run over at breaktime to buy an alfajor. I have a very strong memory of standing and listening to the children shouting out the names of the different brands – Jorgito, Capitán del Espacio, Fantoche. If you were hungry, needed something sweet, felt sad, you bought one. Sometimes you just need an alfajor to survive.”

In its most common form, an Argentine alfajor is a pair of soft, crumbly biscuits sandwiching a layer of dulce de leche (a thick, super-sweet caramel-like confection) and covered with chocolate or dusted with sugar or desiccated coconut. Romero describes alfajores as “biscakes” – a cross between a biscuit and a cake – and has turned them into a career. After working for the likes of the Savoy in London, luxury chocolate-makers Artisan du Chocolat and Rococo and the Hilton in Buenos Aires, she now runs UK-based Sur Chocolates, which produces gourmet alfajores.

Romero places alfajores alongside Malbec wine, beef and yerba mate (an incredibly popular herbal tea) in Argentina’s culinary pantheon – and she’s not alone. Approximately one billion alfajores are sold in Argentina every year, according to the Buenos Aires tourist board, and hundreds of varieties are available in kioscos, supermarkets and bakeries across the country, from the icy realms of Tierra del Fuego in the far south to the high, arid plains of Jujuy in the extreme north.

“You can find them everywhere,” said Buenos Aires-based food writer and Pick Up The Fork blogger Allie Lazar. “Every kiosco sells a great selection of alfajores. Most Argentines have quite the sweet tooth and dulce de leche is basically a national treasure, so alfajores have long been the perfect quick treat or snack. They’re also a great accompaniment to contrast yerba mate, which tends to be quite bitter.”

You may also be interested in:
• The fried dough the world loves
• The remote ranch at the bottom of the world
• The dish that ended the plague

Alfajores are an integral part of Argentine popular culture, appearing in works as diverse as Jorge Luis Borges’ short story The Aleph and the much-loved Mafalda comic strip. When he was a youngster, one of Lionel Messi’s coaches rewarded him with alfajores for every goal he scored. They are so central to Argentine life that the national constitution was reputedly written in an alfajorería (alfajores shop) in the mid-19th Century.

Although they are a relatively simple product, alfajores have a long and complex history. Facundo Calabró, creator of the Catador de alfajores (Taster of alfajores) blog and author of the book En busca del alfajor perdido (In search of the lost alfajor), explains that they date to at least the 8th Century, when an Arabic biscuit featuring sugar, syrup, nuts and cinnamon arrived in the Iberian peninsula during the Moorish conquest. Versions from Andalusia and Murcia subsequently evolved, taking the name alajú or alfajor – derived, some linguists believe, from the Arabic word al-fakher (“luxurious”) or the old Arabic word al-huasu (“filled” or “stuffed”). Cylindrical in shape and made from ground almonds, hazelnuts, breadcrumbs, sugar, honey and spices such as cinnamon, these versions are still traditionally eaten in parts of Spain at Christmas  and in some areas are available year-round.

But alfajores really came into their own in Latin America. “In the 16th Century, during the [colonial period], the alfajor arrived from the south of Spain and spread throughout the Americas, mostly through the convents. It began to hybridise, taking the ingredients of each region and losing others,” said Calabró. Alfajores in Puerto Rico are typically made from ground cassava, for example; while Chile, Peru and Mexico – among others – use their own versions of dulce de leche. But although they are now found across Latin America, they are synonymous, above all, with Argentina, the biggest producer and consumer of the product.

Sometimes you just need an alfajor to survive

Today, alfajores in Argentina are far removed from their Spanish and Arabic predecessors. The most common home-made version – and the style generally found in bakeries – are known as alfajores de maicena, with a dulce de leche filling and a dusting of sugar or desiccated coconut. “But like most foods that came to Argentina, alfajores have been given provincial twists,” said Paula Delgado and Claudio Ortiz, chefs at Estancia Los Potreros, which will publish its first cookbook in 2021. “Our chefs go back to recipes they have been taught by their mothers, aunts, grandmothers. Here in Córdoba province, alfajores are typically filled with a sweet quince paste. All of our gauchos [cowboys], cooks, cleaners and staff sit down in the afternoon to discuss life and politics over alfajores and mate tea. They’re a big part of Argentine culture.”

The most famous type of shop-bought alfajor is the marplatense, which is filled with dulce de leche and covered with chocolate. It takes its name from the coastal city of Mar del Plata, birthplace of leading brand Havanna, which opened its first bakery in 1947 and now has shops and cafes across Argentina. But there are countless variations beyond the classic marplatense. Rummage through the shelves of a kiosco and you’ll find ones covered with a sugar glaze, meringue or yoghurt; filled with jams, ganache, mousse or peanut butter; and flavoured with coffee, fruits, nuts or spirits such as rum or whiskey. There are vegan, gluten-free, rice-cake and even triple-decker versions. People form deep attachments to particular brands, according to Romero’s husband Emanuel: “Argentinians need to belong to one side or the other. Like in football, for example, you support Boca or River. With alfajores, it’s kind of the same – you belong to a brand and you defend them.”

Despite their popularity in Argentina and elsewhere in Latin America, alfajores are relatively little known in the rest of the world, though this is starting to change. Havanna opened a shop in Florida, its first in the US, in 2017. “There are also Havanna stores in Spain, and over 100 in the rest of Latin America,” said Mariano Oliva, CEO of Havanna USA. “We sell about half a million alfajores a year in the US, and have a plan – on hold for now [because of Covid] – to open more locations. Alfajores have phenomenal potential.”

In the UK, Romero’s creative alfajores – yerba mate, Malbec, and dark chocolate and mint are just some of the flavours – have also proved a hit. “Our dream is to take [alfajores] everywhere,” she told me.

Yet while alfajores expand globally, the question of why exactly they are so popular in Argentina remains unanswered. Delgado and Ortiz put it down to the national sweet tooth; Oliva suggests a strong emotional attachment that develops in childhood; and Romero believes it is due to a “shared passion”. For Calabró, the reasons behind the Argentine love of alfajores remain a “great mystery”.

Using a food processor or mixer, blend the butter, orange zest and icing sugar. Then add the egg and honey and continue mixing until pale and creamy. Finally, add the flour and cocoa powder and mix together without overworking the dough. Cover the dough in clingfilm or parchment paper and chill in the fridge for at least two hours.

Roll out the dough to 2mm thick and cut out rounds with a 6cm cutter. Place the biscuits on a tray lined with baking paper, leaving a bit of space between each one, and bake for six minutes at 190C.

Once the biscuits are cool, fill a piping bag with dulce de leche and use it to cover one side of the first biscuit. Turn a second biscuit upside down (to ensure the outer sides of the alfajores are both as flat as possible), place it on top of the first one and press down gently. Repeat with the rest of the biscuits. For the best results, leave for 24 hours, but if you can’t wait, it’s fine to go straight to the coating.

Temper the chocolate and then submerge the alfajores one at a time. Make sure each one is fully coated with chocolate, using a palate knife to remove excess from the top and smoothing the base on the rim of the bowl, and then place carefully on a tray lined with greaseproof paper or cellophane. Once the chocolate dries, the alfajores are ready to eat. 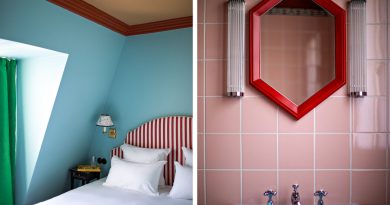 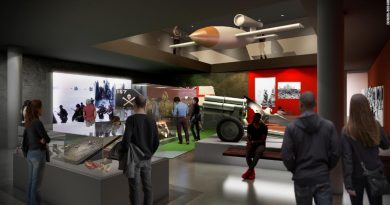 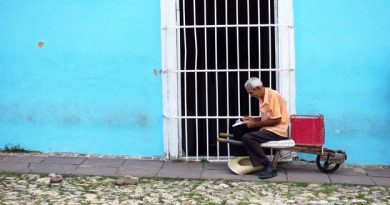