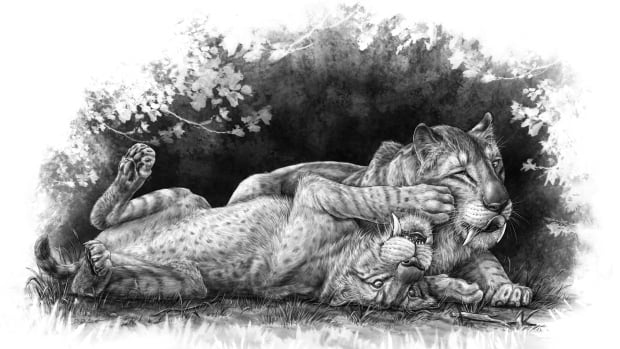 An apparent family of sabre-toothed cats with an unusual genetic quirk is providing new hints about how the predators lived tens of thousands of years ago.

The ancient big cats, also known as sabre-toothed tigers and by their scientific name Smilodon fatalis, ranged through much of North and South America — including Canada — during the last ice age, but died out around 10,000 years ago.

The new study by researchers at the Royal Ontario Museum in Toronto looked at fossils from nearly full-grown individuals that were about 132 and 141 kilograms respectively — roughly the size of a full-grown modern lion or tiger. But despite their huge size, it appeared they weren’t quite ready for adult independence.

“What we’re seeing here is the first evidence to back up this idea that they were probably with their mother at two years old,” said Ashley Reynolds, lead author of the research published this week in the journal iScience.

That’s unlike modern tigers that set out and establish their own territories at a similar stage of growth.

Fossils excavated in the 1960s

The fossils were among 4,000 from various animals excavated by Royal Ontario Museum researchers in Coralito, Ecuador in the 1960s from a site that was once a grassy, open forest area inhabited by giant ground sloths, camels, alpacas and the occasional fox.

There were 58 Smilodon fossils in total, but it wasn’t clear how many individuals they came from.

Reynolds, a PhD candidate at the University of Toronto and the Royal Ontario Museum, took a closer look, and found among them two lower left jaws that obviously belonged to two different individuals.

They contained a full set of adult teeth that showed little signs of wear, suggesting the animals, while nearly fully grown, were adolescents about two years old — roughly equivalent to human teenagers.

And both those individuals had an unusual feature — an extra premolar that is found in only five per cent of sabre-toothed cat jaws.

Because it’s so rare and the presence of an extra tooth is known to be genetic in other animals such as humans, and because the animals were of similar size and found together, the researchers proposed that the two individuals were from the same litter of cubs.

“The coolest thing is that we have evidence that we have siblings,” Reynolds said. “It’s very, very, very rare that you find evidence of two fossils being related.” And most of those cases, she said, involve eggs or newborns.

Animals were likely social, not solitary

Most of the other Smilodon bones found with the two cubs looked the right size to come from the same animals, except for one ulna — a forearm bone — that was larger and came from a mature adult.

The researchers suggested that this was probably the cubs’ mother, as modern cats are generally cared for by their mothers.

She noted that when modern tigers are this close to being fully grown, they’ve already gone out and established their own territories.

If these cubs were still with their mother, that would imply that sabre-toothed cats were more like lions — social animals that stay with their parents for longer than solitary tigers.

Though commonly referred to as the sabre-toothed tiger, Smilodon is not actually closely related to modern-day big cats like tigers and lions.

Reynolds noted that other studies suggest that Smilodon’s huge, iconic sabre-like canines, used for hunting, took about two years to grow in. The juveniles may have relied on their family group until those had fully developed, she said.

“We will never be able to go out and see a sabre-toothed cat in the wild,” she said. But, based on interpretation of fossil evidence, she said, “it’s pretty remarkable to think what we can tell about animals that have been gone for thousands of years.”

Larisa DeSantis, a paleontologist who has studied sabretooth cats but was not involved in the study, said the paper is “thought provoking and raises several interesting hypotheses regarding the sociality of [sabre-toothed] cats.”

But DeSantis, an associate professor of biological sciences and earth and environmental sciences at Vanderbilt University in Nashville, Tenn., said the paper’s conclusions rely on a lot of assumptions about the relatedness of the individuals that haven’t been verified with techniques like DNA analysis or even radiocarbon dating to confirm they all died at the same time.

“It would seem logical that saber-tooth cats would also [like lions] have an extended period of parental care; however, this is difficult to test with fossils,” she said in an email.

“Further study of these specimens may help bring additional clarity to the social behaviour of sabertooth cats.”

Reynolds said radiocarbon dating is tricky for fossils found at sites like Coralito, which is saturated in tar, and the likelihood of getting DNA out of fossils from this kind of environment is also low. But she said both techniques would be interesting to try.

Margaret Lewis, a paleontologist who studies the evolution of meat-eating mammals and was also not involved in the research, said researchers’ hypothesis that the cats were related and the conclusions drawn from that are all possible.

“How probable it is, it’s hard to say because it’s one thing built on another,” said Lewis, a professor at Stockton University in Galloway County, N.J. However, she said the ideas about how sabre-toothed cats grew will be interesting to test in future studies.