The bats were much too quiet though for the plan to succeed.

Tampa Bay’s Blake Snell allowed one hit over 5 2/3 innings and the Rays’ bullpen did the rest in a 3-1 victory over the Blue Jays in Game 1 of their best-of-three wild-card series.

Manuel Margot hit a two-run homer in the seventh inning off reliever A.J. Cole. The Blue Jays, held to five hits, scored their lone run in the eighth when Bo Bichette drove in Rowdy Tellez with a sacrifice fly.

Pete Fairbanks gave up a double to Lourdes Gurriel, Jr., in the ninth before striking out Teoscar Hernandez and getting Joe Panik on a weak pop-up to end it.

“You’ve got to let this game go,” Montoyo said. “It was an outstanding game [by the Rays], we didn’t hit today. Let’s get ready for [Game 2 starter Tyler] Glasnow tomorrow.”

Toronto’s Matt Shoemaker, a surprise Game 1 starter, threw three scoreless innings for the Blue Jays in his second appearance since missing a month due to shoulder inflammation. But Montoyo pulled the right-hander after just 35 pitches even though he seemed to be in form.

“At first I was a little maybe surprised to come out of the third,” Shoemaker said. “But it is what it is. I don’t make those decisions. Robbie [Ray] came in and pitched really well.

“It was a game we wanted to win obviously and we’ll just come get ’em tomorrow.” 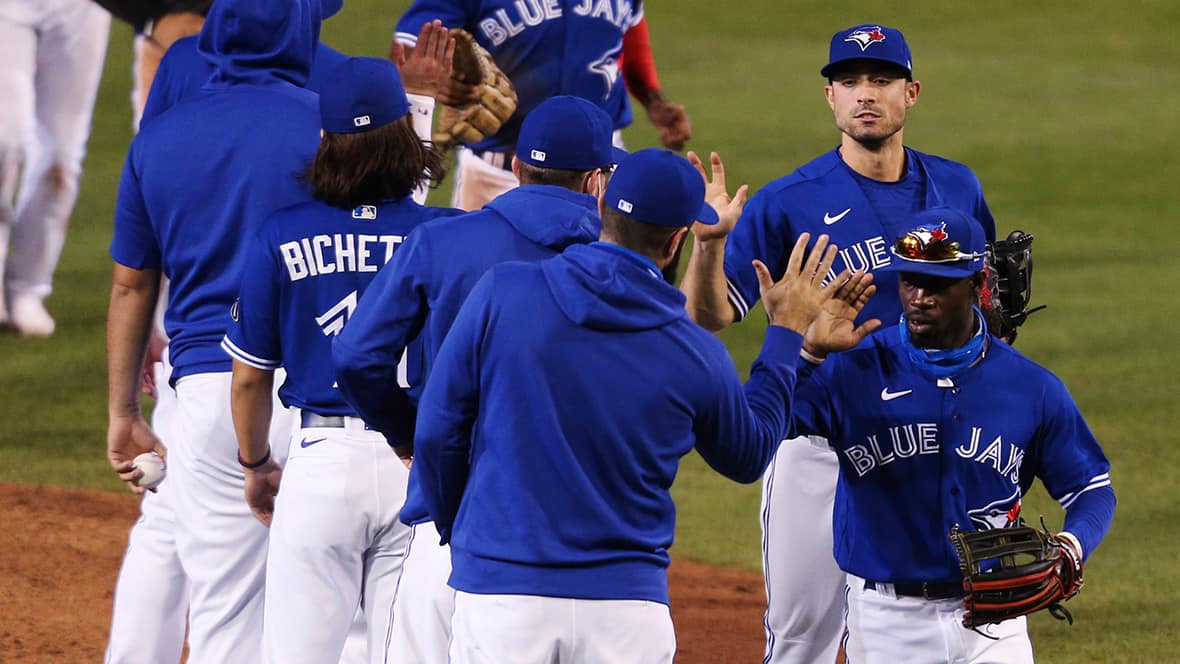 With Ray on for the fourth inning, Randy Arozarena led off with a triple and scored the game’s first run on a wild pitch. Ray (0-1) settled in after his early hiccup, throwing three innings of one-hit ball while striking out five.

“It was just like how we mapped it out,” Montoyo said of the pitching plan. “One-nothing in the sixth, I’ll take that any time.”

Starting Shoemaker was a gamble for the Blue Jays, who felt comfortable taking the chance that their second-best starter, Taijuan Walker, won’t pitch unless the series goes the distance. The decision also allowed ace Hyun-Jin Ryu to get an extra day of rest ahead of his Game 2 start on Wednesday.

“I think the biggest thing is not to press, not to really panic,” said Blue Jays infielder Cavan Biggio. “That’s probably the worst thing that we can do as a team. We’ll just continue to go out there and have fun.”

Toronto threatened in the seventh inning after Diego Castillo hit Vladimir Guerrero Jr., with a pitch and gave up a one-out single to Gurriel.

For the first time in four years, the Toronto Blue Jays will play in the MLB postseason. The team of young stars surprised many in the baseball world by clinching a playoff berth with a victory over the New York Yankees. 1:52

But Anderson came on and got two outs to leave them stranded. In the bottom half, Cole walked Joey Wendle before Margot went deep on a 1-1 pitch.

Snell, who won the AL Cy Young Award in 2018, was consistently ahead in counts and didn’t allow a hit until Alejandro Kirk led off the sixth inning with a single. He finished with nine strikeouts.

The Rays are the top seed in the American League after a 40-20 regular season. The Blue Jays took the eighth and final seed after a 32-28 campaign.

Toronto went 4-6 against the Rays in the regular season but outscored Tampa Bay 48-44 overall. Four of the Blue Jays’ six losses were by one run.

The Blue Jays finalized their 28-man series roster earlier in the day. Tellez, who missed three weeks with a knee strain, made the cut while injured reliever Jordan Romano (finger) of Markham, Ont., did not.

This is the first time that the Rays and Blue Jays have met in the playoffs.

The Rays, who have yet to win a World Series since making their debut in 1998, lost in the American League Division Series last year.

The Blue Jays, who won championships in 1992 and ’93, are making their first playoff appearance since 2016.