An NHL legend from Manitoba is honouring an NHL pioneer from Saskatchewan and the path he cleared for First Nations people dreaming of the big league.

“It’s a sad day for the hockey world, especially the First Nations across the country. We’ll miss a great guy,” said Reggie Leach, whose name is inscribed on the Stanley Cup, about Fred Sasakamoose, who died Tuesday from complications due to COVID-19.

Sasakamoose, who grew up on the Ahtahkakoop Indian Reserve in Saskatchewan and later became chief of the community, was one of the first Indigenous athletes to play in the National Hockey League.

“It was just an honour for me to be around him. Every time I would see him, it made my heart happy,” said Leach, from Riverton, Man., who was a 16-year-old junior player when he first heard the name Sasakamoose.

“I heard there was a [First Nations] guy who played a few games in the National Hockey League and back then, I don’t think there was that many First Nations players playing anywhere,” Leach said, adding it gave him inspiration.

Now 70, Leach had a storied NHL career over 13 seasons with the Boston Bruins — who drafted him third overall in 1970 — as well as the California Golden Seals, Detroit Red Wings and Philadelphia Flyers, with whom he won a Stanley Cup in 1975.

But he’s not sure any of it would have happened without Sasakamoose first lacing them up, even if it was only for a brief time.

Sasakamoose played just 11 games with Chicago during the 1953-54 season, splitting the rest of the time with the Moose Jaw Canucks of the Western Canadian Junior Hockey League.

“A lot of people say, ‘well, he only played 11 games,’ but to me, those 11 games were everything to our First Nation people,” said Leach, who earned the nickname the Riverton Rifle for his speed and goal-scoring prowess.

“He carried that [mantle as a leader] on through his whole life, being chief in his community and showing leadership and kindness to all — not just the First Nation people. That’s the way life should be, being kind to everybody.”

Leach never got the chance to meet up much with Sasakamoose until after Leach retired in 1984.

Then they often crossed paths at youth workshops and tournaments across the country where they helped out — including the Fred Sasakamoose “Chief Thunderstick” National Championship for young Indigenous hockey players in Saskatchewan.

“He wanted to push our young kids to do the best they can and don’t give up. The stuff that he has done for people in his life, it’s amazing,” said Leach.

“I got to know him over the years and we became great friends. I listened to his stories and the struggles that he went through.

“He was a very, very interesting person to talk to. Every time I had a chance to spend some time with him, I would sit with him and talk to him, and I learned a lot from him.”

Despite the hardships Sasakamoose faced, “he always had a smile and a kind word for everyone,” Leach wrote in a Facebook post late Tuesday night.

Leach last spoke with Sasakamoose on a Zoom call about three weeks ago, along with other former Indigenous NHLers Ted Nolan and Theoren Fleury. The group chatted about their careers and hockey in general, he said.

“It was a great thing and something that I’m very happy I got to do.”

Despite the trailblazing of Sasakamoose, Leach and others who followed, the NHL lags in its inclusion efforts around Indigenous people, said Leach.

“We’re a long way off,” he said bluntly.

So sorry to hear about @FredSasakamoose today. Thank you for being a leader and paving the way for all of us indigenous hockey players and helping us dream big. You will be missed. pic.twitter.com/SYAYozKDEs

“It’s like anything else. We’re always second fiddle when it comes to anything with First Nation people and that stuff has to stop.”

When the league appointed Willie O’Ree as ambassador to hockey for Black players, he hoped an Indigenous appointment would soon follow. It hasn’t.

O’Ree, who became the NHL’s first black player on Jan. 18, 1958, with the Boston Bruins, has been the league’s diversity ambassador since 1998. In that role, he travels to schools and hockey programs to promote messages of inclusion, dedication and confidence.

“Those are things that sort of bothered me with the National Hockey League, that they do something for one nationality but don’t do anything for us,” Leach said.

“I think our First Nation people are probably the best hockey fans in the world because that’s all they do is live and breathe and eat hockey. 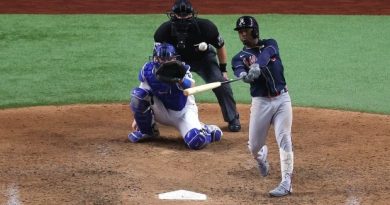