There were always only two ways the U.S. presidential election was going to play out.

Either it would be a decisive victory for former vice-president Joe Biden that would be apparent or projected before the sun rose on Wednesday morning, or the outcome wouldn’t be resolved for days, potentially leaving the country in an interim state of uncertainty and discord that President Donald Trump could attempt to play to his advantage.

Now that a new day has arrived, it’s clear which path the U.S. election took.

What comes next, however, isn’t.

That’s because a lot of votes still have to be counted — and there are enough of them to make the difference between a Biden presidency and a Trump re-election.

While the vote tallies for each candidate will continue to change over the next few hours and days, Wednesday morning it appeared that the election would come down to the results in six states: Georgia, Arizona, Nevada, Michigan, Pennsylvania and Wisconsin.

As of 8 a.m. ET, Biden holds a lead in Nevada, Arizona and Wisconsin and appears on track to move in front in Michigan, enough for the Democratic nominee to reach the threshold of 270 electoral college votes needed to win the White House. If he holds these four close states, he will become the next president.

But that gives Biden exactly 270 votes, so it isn’t a comfortable win by any stretch. However, if he adds Georgia and Pennsylvania to his tally he jumps to 306 votes, even with Trump’s result in the 2016 election.

Trump still has a path but it is looking like a challenge as more votes are counted. If he can’t flip Wisconsin or Michigan back to Republican red, reversing a significant trend toward the Democrats in these states at the tail end of the count, then he will need to turn Arizona or Nevada around. The remaining ballots in Nevada are largely absentee ballots that are expected to favour Biden. Trump trails in Arizona by five points.

WATCH | ‘We feel good about where we are,’ Biden says:

U.S. Democratic presidential candidate Joe Biden spoke to a crowd at a drive-in rally in Wilmington, Del., where he said he believes he and his party are on track to win the election. 0:59

And those states only matter if he can also win Pennsylvania or Georgia — hardly a given.

Start with Georgia. The state was looking promising for Trump throughout the night until the votes in Atlanta started to be counted in bigger numbers. By early morning, Trump’s lead was down to about 100,000 votes. But the counting was put on pause in Fulton County, where Atlanta is located, due to a broken water line. Roughly 100,000 votes in this county alone have yet to be counted. Among those that have been tallied, Biden is leading Trump by a margin of 45 points.

Other counties in the state that are leaning heavily Democratic still have lots of votes to be counted as well, while nearly all of the vote in strong Republican counties has already been reported. The state could flip to the Democrats once all the votes are in.

And then there’s Pennsylvania, the state which could keep the country in suspense for the rest of the week. Ballots received in the mail by Friday will still be accepted, meaning some of the votes to be counted in Pennsylvania have yet to get to the counters. The absentee ballots that have been counted (and separately reported) have gone overwhelmingly to Biden by a margin of roughly 4:1. 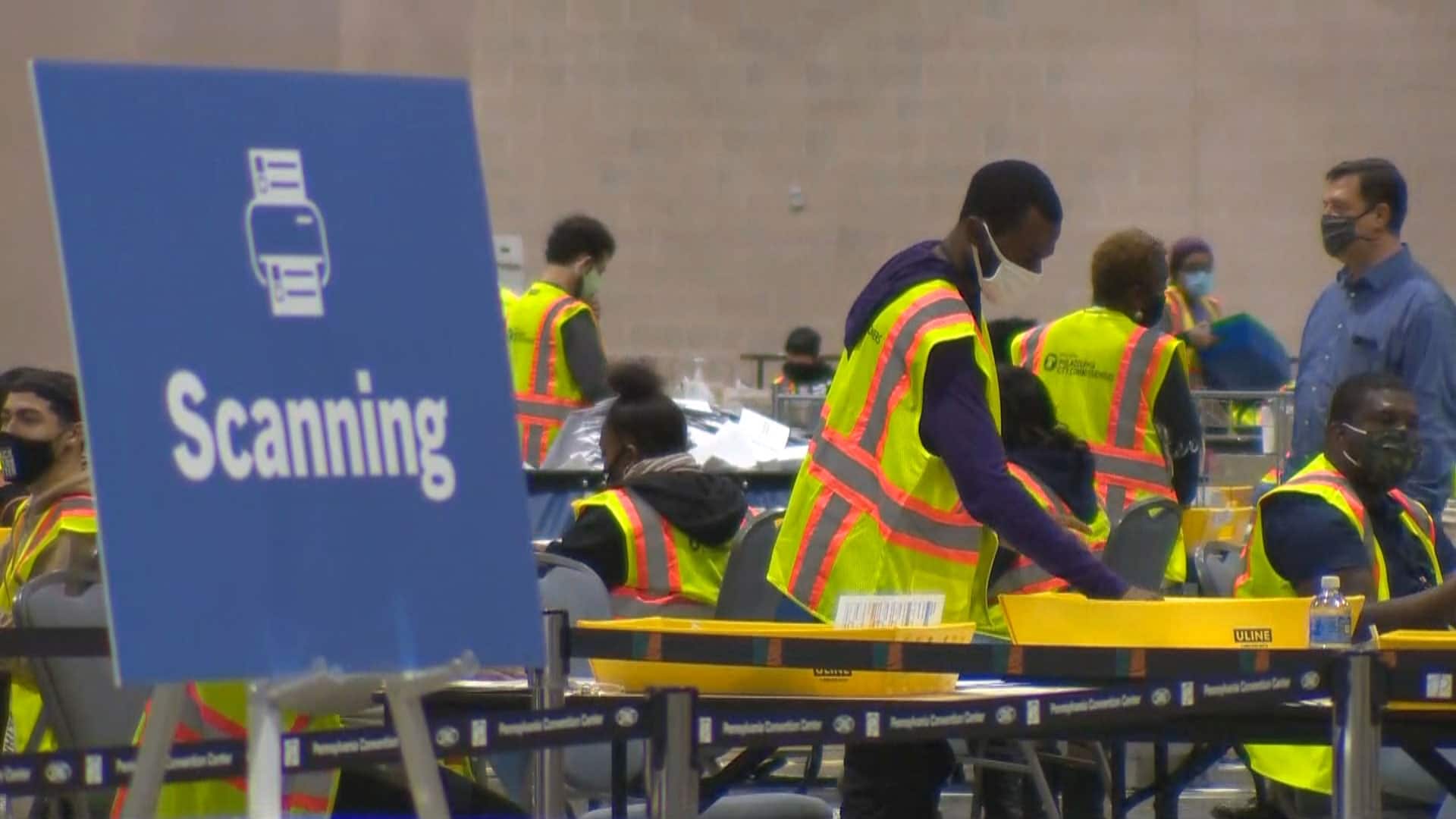 A large vote-counting operation has been set up at the Philadelphia Convention Center to count mail-in ballots. Machines called extractors separate the ballot from the main envelope and the security envelope and then the ballots are scanned. They can scan 30,000 an hour. 0:40

The counties containing Philadelphia and Pittsburgh, which preferred Hillary Clinton over Trump by 67 and 16 points, respectively, in 2016, also have lots of results still to report. Only a little more than half of the vote in Philadelphia County has been counted and only 70 per cent in Pittsburgh. These two counties alone could represent more than 600,000 uncounted ballots, roughly the same as Trump’s lead statewide.

A closer election than expected

That this election has come down to just a few states — even a few counties — is somewhat unexpected. National polls heading into election day gave Biden a wide lead, far wider than the lead Clinton had in the 2016 campaign.

He was ahead by a good margin in Pennsylvania, a respectable one in Florida and was narrowly in front in Georgia and North Carolina. He was within a couple of points of Trump in Ohio and Texas.

It appears that the Democrats’ hope of expanding their map into the Sun Belt — in addition to regaining the Midwestern states they lost in 2016 — has not been entirely realized. They were unable to capture Florida. They closed the gap in Texas but once again failed to make the demographically shifting state swing. Georgia could still go their way, but only Arizona appears to be potential new territory for the Democrats.

Republican presidential candidate Donald Trump said as far as he’s concerned he and the Republican Party have won the U.S. election. He said he will go to the U.S. Supreme Court and wants voting to stop. However, several states are still counting votes that have already been cast. 1:12

Instead, Biden’s chances hinge almost entirely on the traditionally Democratic Midwest. National exit polls suggest he has performed better than Clinton did among white Americans and those without a college degree — demographics that were key to Trump’s victory in Wisconsin, Michigan and Pennsylvania.

The exit polls also suggest Trump has done somewhat better than he did in 2016 among Black and Hispanic voters. That might be why Biden was unable to flip Florida and Texas and why he might still come up short in Georgia and North Carolina.

Too early to judge the polls

After Trump’s surprise victory in 2016, there were many questions about whether the polls could be trusted again. While it did inject a healthy dose of caution in interpreting the polls, there was an expectation that the polls would get closer to the mark this time — there were fewer undecideds than in 2016, and the pollsters had taken steps to capture some of the Trump-leaning demographics that had been missed in the last campaign.

These incomplete election results are unlikely to convince many skeptics that pollsters have improved the efficacy of their polls.

But judgment will have to wait until all of the results are in. In the last election, Clinton won the national popular vote by just over two percentage points, similar to the three- or four-point lead she was given in the polls. It took weeks to get there, however, due to the delay in counting mail ballots in places like California.

The same scenario could play out this time. Nationally, Biden holds a lead in the popular vote of about two points, but that is likely to grow significantly by the time all the votes are counted. Whether his lead will grow as wide as the eight- or nine-point edge he had in the polls remains to be seen.

The margins at the state level will change in the coming hours and days, so it is also premature to judge the performance of the polls in each individual state.

However, one state that does seem to have bucked the polls is Florida. Most polls gave Biden a modest lead in the state but it stuck with Trump. North Carolina and Georgia might be other states in which polls favoured the losing candidate, but both of these were classified as toss-ups and final projections have yet to be made.

There is lots still to be determined in the coming days, but the polls had long identified that both Biden and Trump had paths to the presidency, with a narrower one for Trump. While results have made Biden’s paths tighter, he still has more and better options than his opponent. That pre-election state of the race still holds — even on the morning after.

What do you want to know about the U.S. election? Email us at Ask@cbc.ca