“Since we can’t drink the tap water back in Neskantaga, I’m scared to use the tap water here to drink it,” Moonias said. “So I use water bottles.”

Moonias has spent her whole life worrying about the water flowing from her faucets back home in Neskantaga First Nation, a remote fly-in Ontario community about 450 kilometres north of Thunder Bay.

Neskantaga has the longest-duration boil water advisory of any reserve in the country — 25 years and counting.

“Sometimes, I feel like we don’t exist,” Moonias said. “Like, nobody knows that we don’t have no clean water. Like, we’re just ghosts and we’re just put in a drawer, in a box.” 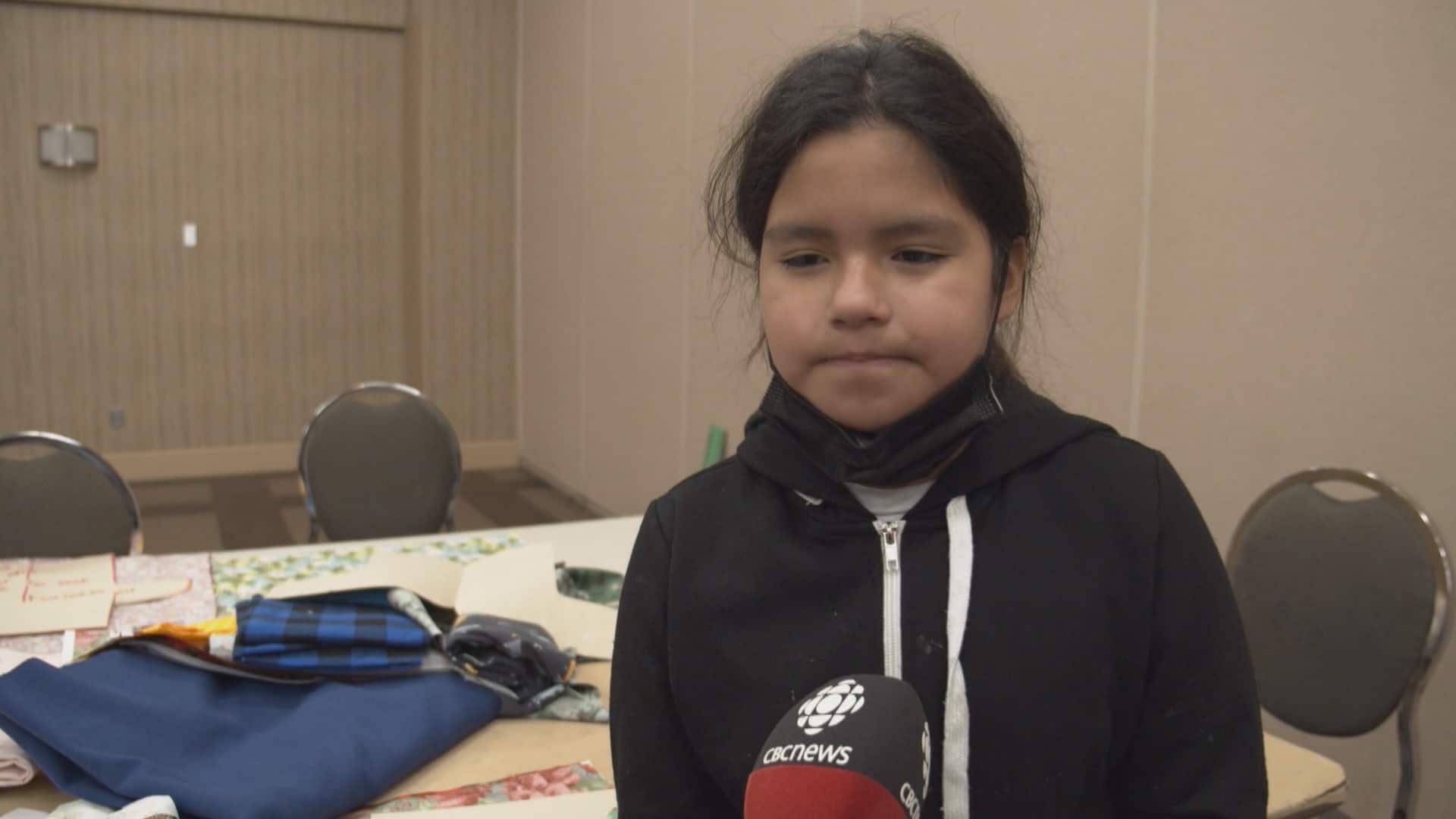 Nine-year-old Bee Moonias describes what life is like in Neskantaga First Nation. 0:43

Moonias and nearly 300 other Neskantaga members have been staying at the Victoria Inn Hotel in Thunder Bay since an oily sheen was detected in their reservoir on Oct. 19 and running water was shut off.

Before the film was deemed non-toxic, its discovery left residents with a choice: go without water or evacuate during a pandemic. They decided the safest option was to pack their bags.

Now, more than 40 days later, the evacuation is taking a toll, but community members say they are determined to maintain some kind of normal life away from home until clean drinking water starts flowing in Neskantaga for the first time this century.

At chief and council’s request, all the rooms at the Victoria Inn are being rented by the federal government for Neskantaga members to protect them from the COVID-19 pandemic.

Inside the hotel’s front doors, visitors are screened through temperature checks and questions about symptoms.

“We miss our home so badly,” Sakanee said. “We just left everything in there, even our moose meat. And I filled up my freezer before we left.”

One of the hotel’s ballrooms has been turned into a classroom for Moonias and another nine-year-old named Jayla Troutlake. One recent afternoon saw them learning to sew Christmas stockings as a cellphone played “O Little Town of Bethlehem.”

When asked if she is having fun in her new temporary home, Troutlake answered without hesitation: “No.”

Troutlake said she misses her home and her dog Gizmo, one of roughly 80 dogs left behind in Neskantaga.

The dogs are being fed by the Canadian Rangers, who are also gathering wood for the few band members who have agreed to stay behind to keep the houses warm.

Troutlake’s teacher Miko Oyakawa is tired of hotel living as well. At first, she said, she tried to get her students to pretend they were on a field trip. She would bring in different types of fruits and vegetables they can’t get back home.

“I remember kids looking at peppers and thinking they’re plastic,” Oyakawa said. “Pomegranate was by far the favourite.”

But more than a month into this extended field trip, she said, it’s becoming harder to stay isolated, both physically and emotionally. So she tries to maintain a sense of normality with daily lessons and activities.

“For everyone, it’s been really disruptive,” Oyakawa said.

“Kids are staying up really late. Families are going out … Some people are just not sending their kids to school, so it’s hard that way, but we’re trying the best we can”

Oyakawa is also making preparations in case they have to spend the holidays at the hotel. She said the Matawa Tribal Council and people in Thunder Bay have reached out already to donate Christmas trees and fill wish lists for the children.

“All this generosity is so great and touching,” she said. “That gives us hope and keeps us going.”

‘You can’t leave your homeland’

The tentative return date has changed several times. The latest estimate is Dec. 15 at the earliest. Quisess said he is skeptical.

Two weeks of water tests must take place before anyone can return. Deficiencies discovered at the water treatment plant have delayed the start of those tests. A report from the Ontario Clean Water Agency last month found numerous problems at the plant, including leaks, mislabelled piping and tags missing from almost all items of equipment.

The community is now drafting the terms of reference for a third-party investigation with the federal government of Neskantaga’s 25-year-long water crisis, and of the business practices of the contractors, engineers and project management firms that have worked on Neskantaga’s water system and those of other First Nations.

“This investigation is going to open a can of worms,” Quisess said.

Neskantaga’s plant was built in 1993 and has never adequately treated and disinfected water.

A long-term drinking water advisory was put in place on Feb. 1, 1995, less than two years after the plant was commissioned. It’s been in effect ever since.

As part of its fiscal update, released this week, the federal government is proposing to spend $1.5 billion this year and $114.1 million per year afterwards to speed up work on lifting all long-term drinking water advisories in First Nations, and fund water and wastewater infrastructure.

But money isn’t the issue in Neskantaga. The Liberal government already earmarked $8.8 million to upgrade Neskantaga’s water treatment plant in 2016. The work was supposed to be completed by 2018, but the project has run into a cascade of delays and the budget has doubled to more than $16 million.

Despite all the problems, Quisess said he doesn’t want to live anywhere else.

“You can’t leave your homeland,” Quisess said. “We were born and raised there. Our ancestors lived there.”

Charla Moonias, walking a support worker’s Pomeranian down the hotel hallways, tried to maintain a sense of optimism.

“It’s been really hard to get motivated to come down here because this isn’t our normal,” she said.

“I don’t feel optimistic about it. I feel like we’re going to be here until the new year. I already picture us trying to celebrate Christmas here.”

Moonias said she spends her days binge-watching TV shows, ordering food and — when she finds the strength — going downstairs to the common rooms to meet with people.

Moonias said she used to deal with substance abuse issues herself and it’s been a struggle to live at the hotel.

“It’s taking a toll on my depression, my mental health, my addictions,” she said. “I’m really struggling to stay away from all the bad influences and bad people.”

Moonias was born in Winnipeg and started living in Neskantaga after she was adopted by Chief Chris Moonias.

In 2016, Moonias met with Prime Minister Justin Trudeau as part of a youth delegation from Northern Ontario First Nations pressing for clean drinking water in Neskantaga. She said her skin used to break out into blisters after showering with Neskantaga’s water.

Now, she wonders whether taking the community’s case to Trudeau accomplished anything.

‘See how it feels’

Bee Moonias is now being raised by her grandparents, who also live without clean tap water.

“I don’t want to go through what my grandpa has been through 25 years ago,” Moonias said. “Go live in Neskantaga and see how it feels getting no clean water. You’re welcome to sit in my house. Stay in my house.” 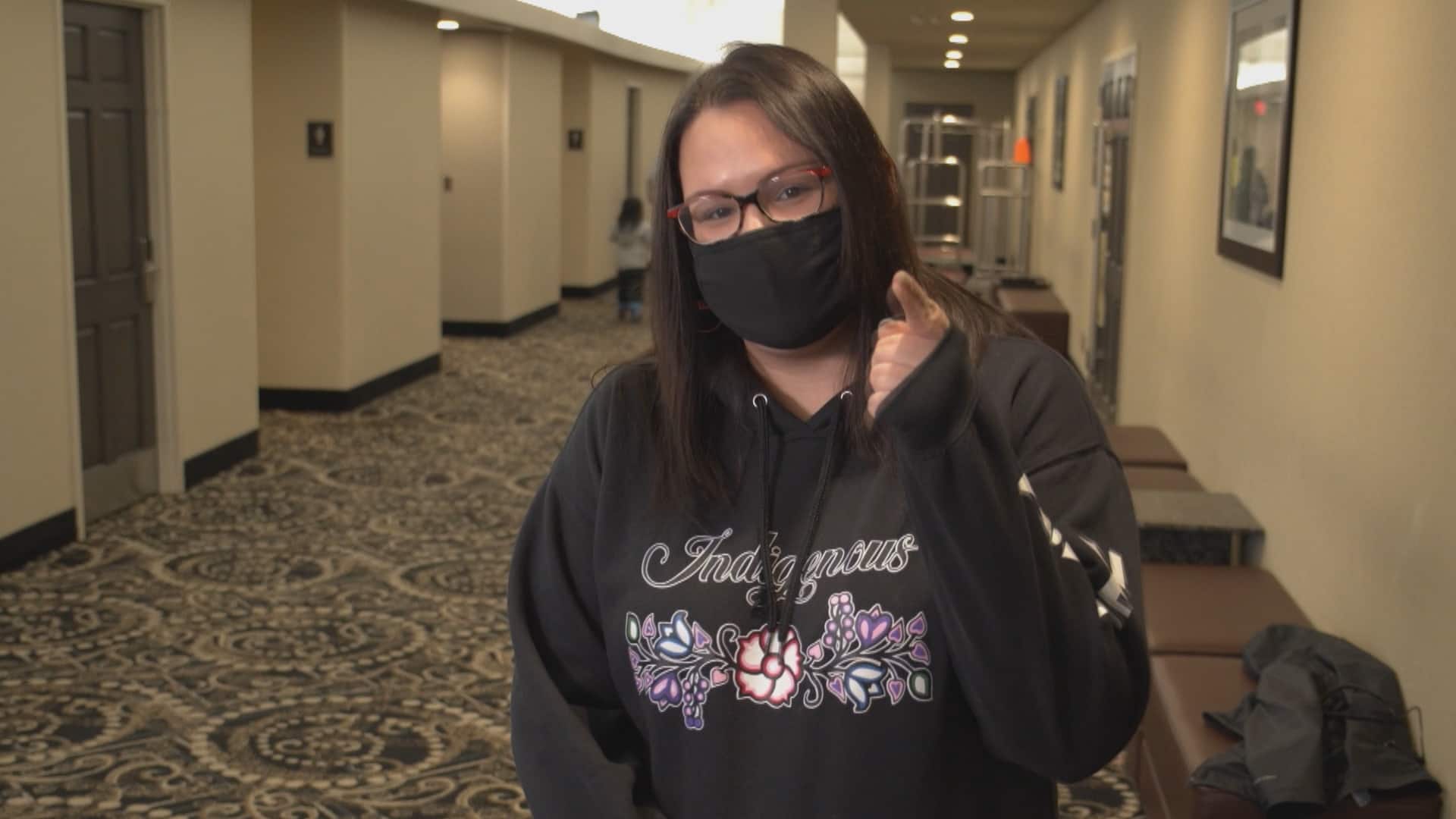 If she had another chance to meet the prime minister, Charla Moonias, 23, describes what she would say. 0:26

The federal government has said repeatedly it is committed to ensuring Neskantaga has a source of clean running water.

But even at the tender age of 9, Moonias doesn’t have much faith in Ottawa’s promises.

“I would be shook if they fixed the water really properly,” she said.