The race was also by disrupted by two safety cars in incidents that eliminated both Racing Point drivers, but will be forever remembered for the horrifying incident on the opening lap that involved Grosjean escaping his burning car after piercing one of the track’s barriers after making contact with Daniil Kvyat.

At the initial start, Valtteri Bottas made a slow getaway from second when the lights went out, while Hamilton lept clear into the lead, and the Finn was quickly passed by Verstappen and Sergio Perez on the run to Turn 1.

Bottas was then swamped by Alex Albon and Daniel Ricciardo at the opening right-hander and as he lost momentum entering Turn 2, it appeared to set off a chain of reactions in the pack behind.

Lando Norris had to check up, which brought him into a line with Esteban Ocon and Pierre Gasly, which pinched at Turn 2 and caused Norris to slow again and left him with front wing damage.

The following Ferrari pair and Lance Stroll had to go wide in avoidance as they came up to the rear of Norris’s car, which sent the Racing Point wide, and the pack bunched up again going through the Turn 3 right kink, which slowed the group at the back of the midfield again.

The drivers at the rear of the field – including Grosjean – therefore quickly gained on those ahead, and in reaction the Haas driver moved right across the track, striking Kvyat’s AlphaTauri and sending him straight into the barriers.

His car was torn in half by the impact, with its fuel igniting and the front half of the car piercing through the barrier.

Grosjean was able to extricate himself from the burning wreckage, jumping back to the track-side of the fence and into the arms of FIA medical delegate Dr Ian Roberts, who had arrived on the scene with medical driver Alan van der Merwe a few seconds after the impact.

The race was red flagged after 36 seconds, just as the leaders were exiting Turn 6, and suspended for an hour and 20 minutes while Grosjean was taken first to the circuit’s medical centre by ambulance and then airlifted to the BDF Military Hospital for further evaluation. 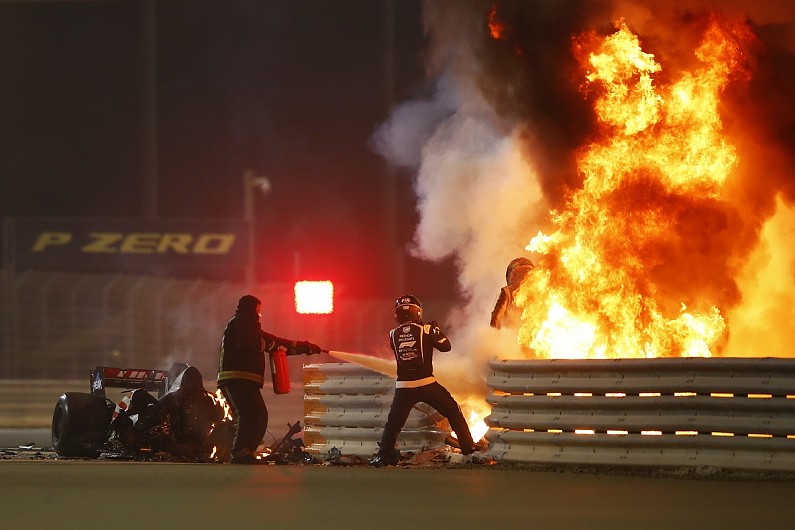 The pierced barrier was cutaway and replaced with a series of concrete blocks, installed under the supervision of FIA race director Michael Masi.

The cars restarted on lap three of 57, with Hamilton on pole again ahead of Verstappen and Perez, with Bottas back up to fourth as the order was taken by the positions at the second safety car line during the initial start.

Hamilton again made a simple getaway from pole, with Bottas briefly able to challenge Perez and Verstappen ahead of him, but it was the Red Bull that had to defend against the Racing Point at the first corner.

Perez was edged out on the outside line, which put him back under pressure from Bottas as the cars raced through the rest of the first sector.

But the race was suspended again when Stroll and Kvyat came together at the Turn 8 hairpin, with the AlphaTauri on the inside and flipping Stroll’s car when it hit the Racing Point’s right rear, with Vettel forced to slam on the brakes and Kevin Magnussen breaking his front wing against the suddenly slowing Ferrari.

As Stroll was stranded upside down, the safety car was called into action as he climbed out, during which Mercedes had to pit Bottas when he picked up a puncture, which dropped him from fourth to 16th as he rejoined on the hard tyres.

The race restarted on lap nine, with Hamilton grabbing a 0.7s lead over the line by nailing the final corner better than Verstappen as they moved back to racing speed. 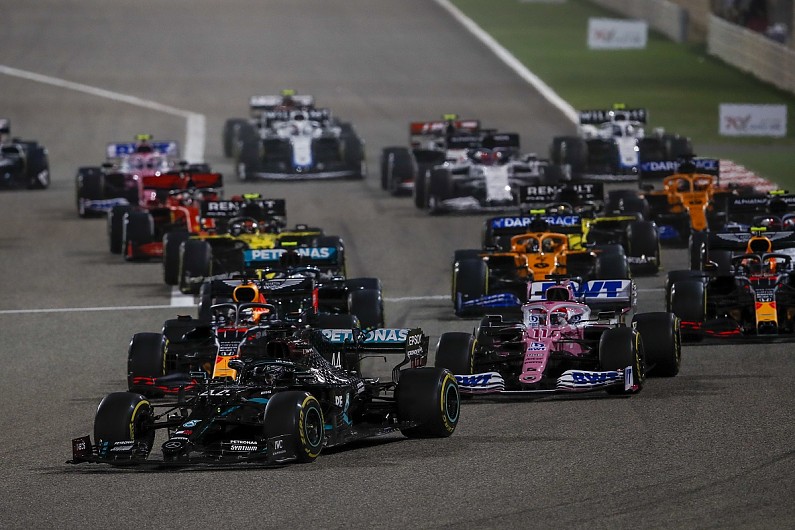 The top two quickly romped clear of Perez, the only two drivers able to lap in the 1m34s, but after just a few laps at that pace Verstappen began to slip back.

By lap 14, Hamilton had edged to a 2.0s lead, briefly dipping into the 1m33s as Verstappen circulated in the 1m35s, and he continued to edge away across the rest of the first stint.

Hamilton pitted at the end of lap 19 to take new mediums with a lead of 4.6s, with Verstappen and Perez coming in at the end of the following tour – where they opted for hard tyres, of which they had both come into the race with two sets to Hamilton’s one.

When the stops shook out Hamilton led by 5.5s at the start of lap 22, but Verstappen told Red Bull he would go “full send” and immediately brought the gap down by a second with a then fastest lap.

The pair then exchanged faster times in the high 1m33s and 1m34s before Hamilton was able to re-establish his five second advantage by the end of the race’s first 30 laps.

Red Bull went aggressive to pit Verstappen for a second time at the end of lap 34, switching him back to the mediums, but the stop ran long by three seconds.

Nevertheless, after Mercedes had pitted Hamilton for hards at the end of the following lap, Verstappen was just 3.7s behind after a rapid out lap and first flying effort, as Perez pitted from in between the two leaders.

In a near copy of the second stint, Verstappen was initially able to exchange quicker laps with Hamilton before starting to slip back – hitting the 1m34s again after initially running in the 1m32s after his second stop on lap 46.

Hamilton had edged his lead up to five seconds again by that tour, at the end of which Red Bull brought Verstappen in for a third stop to take another set of mediums as he had enough time in hand over Perez.

Verstappen quickly set the race’s fastest lap at 1m32.014s as Mercedes opted to leave Hamilton out with a near 30s advantage.

That was whittled down to just over 20s, although it appeared as if Hamilton had everything under control, when Perez’s engine suddenly began to let go as he ran down the main straight with four laps to go. 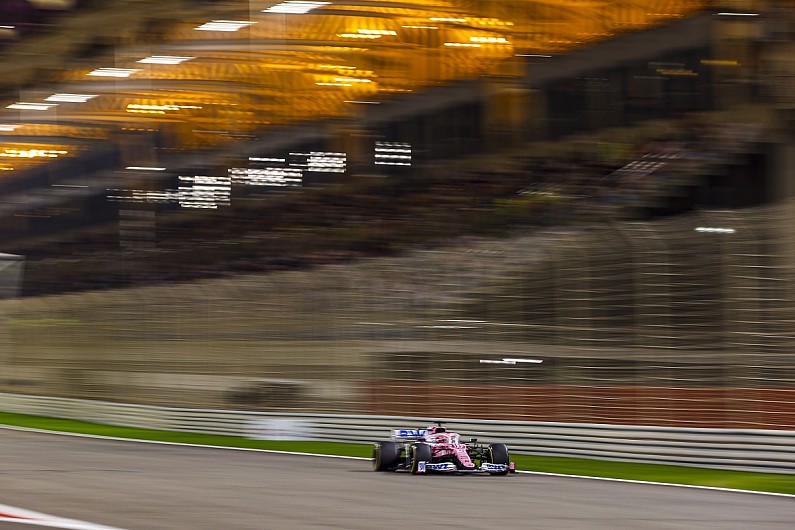 The Racing Point driver slowed as his power unit eventually caught fire, after which he stopped on the back straight and the safety car was called out again.

Mercedes considered pitting Hamilton again but opted not to as the gap to Verstappen was too marginal, judging that the race would finish under the safety car, which it eventually did.

Albon joined Hamilton and Verstappen on the podium as a result of Perez’s problem, with Norris and Sainz moving up to fourth and fifth for McLaren – the latter gaining after making the soft tyres work unexpectedly well during the opening stint.

Gasly was the only driver to complete a one-stopper (Antonio Giovinazzi stopped for a second time under the final safety car and fell to 16th as a result) as he came home fifth despite being overtaken by the two McLarens late on and looking as if he would be vulnerable to Ricciardo behind without the safety car.

Bottas recovered to eighth after initially making little progress after his puncture, making three stops on his way back up the order, and then getting a suspected second puncture during the second safety car, which he was able to nurse to the finish.

Ocon finished ninth having been involved in a long and costly fight with Ricciardo during the middle phase of the race, with Leclerc rounding out the top 10. 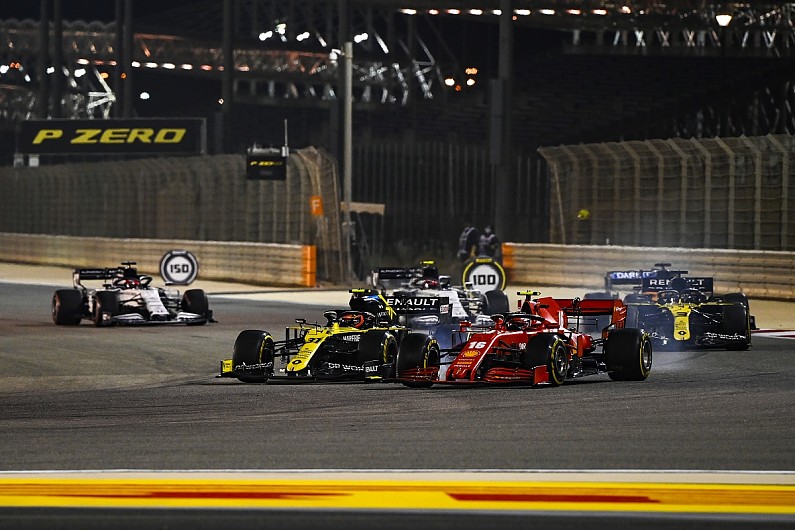 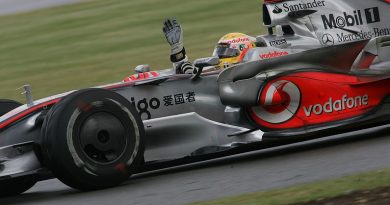 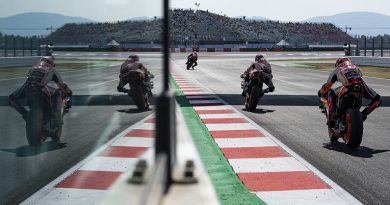 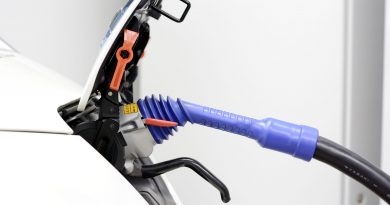