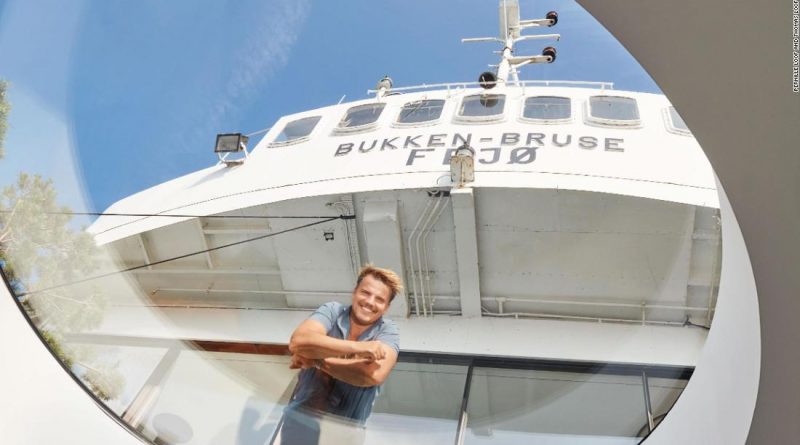 In the latest issue of Architectural Digest (AD) Danish architect Bjarke Ingels recalled that while on a video conference in his family home — which just happens to be a 450-ton ferry docked in Copenhagen — the caller asked if he was on a spaceship.

“People had warned me that living on a houseboat was simultaneously the best and worst thing,” Ingels said in the interview, which appears in the November issue of the magazine. “When it’s great, it’s epically great.”

All hands on deck

The 46-year-old “starchitect,” who has designed landmark buildings around the world, from his home country of Denmark to the US and China — he was behind the rebuilding of Two World Trade Center in New York and the double-loop building for Shanghai Expo 2010 — offered the design and architecture magazine a glimpse of his floating family home, which he shares with his wife, architect Rut Otero, and their nearly two year-old son, Darwin.

Having founded his own practice, Bjarke Ingels Group (or BIG), in 2005, he took a pragmatic approach to the daunting job of renovating the 126-foot ship. “It is a boat, so it wants to be symmetrical,” Ingels said. “Part of the project was restoring that symmetry along both axes.”

The radically renovated home is now modern, warm and welcoming, a far cry from its previous existence as a commercial ferryboat, and is moored near Refshaleøen. This former industrial area has seen a revival over the past few years, in part thanks to Ingels, who designed an affordable housing project, Urban Rigger, for the neighborhood, as well as new home for Noma, the award-winning restaurant where tables are booked months in advance.

When Ingels and Otero bought the out-of-service ferryboat in 2016, they soon realized the enormous task at hand. “Living on a boat is a learning curve,” Otero said.

And even though the couple spent their first winter with intermittent heating and running water, which meant they sometimes had to resort to bottled water to bathe before client meetings, both husband and wife were smitten with the epic views. “It has the past, present, and future of Copenhagen all in one glance,” Ingels said. “Look east and you can see the sun rising. Look west and you can see the sun setting over the queen’s palace.”

Ingels has long been a fan of floating architecture. In 2019, BIG unveiled Oceanix City, a concept for a 10,000-people community situated on modular hexagonal islands. “It is the most resilient architecture,” he told AD of water-based structures. “As sea levels rise, so will houseboats.”

His family-home project has given the architect the chance to bring his fascination with living on water into his own life. Meanwhile the interiors are a confluence of original nautical features, objects designed by Ingels and others, and souvenirs from the couple’s travels.

On the vessel’s upper level, there is a large living area that boasts spectacular views of the city’s harbor. The serene room has a suspended fireplace, which is framed by an oversized sofa designed by Kibisi, a brand co-founded by Ingels. On the other side of the ship there is an open kitchen with oak cabinetry and table by Italian architect Luca Cipelletti that comfortably sits ten, illuminated by Ingel’s Artemide pendant lights.

Below deck is one of the boathouse’s most dazzling rooms. Not unlike a fantastic version of a spaceship, the family playroom was stripped back and its sinuous form painted entirely in white. This blank canvas was then punctuated with colorful textures including handwoven beanbags and pillows bought during a visit to Cape Town.

The family’s interest in the waterfront is so present that the couple’s son’s first word was “agua” — water in Spanish. “Architecture traditionally is so static and permanent,” Ingels said. “This is dynamic and mobile.” Still defiant, Trump greets crowd of supporters in US capital | US & Canada 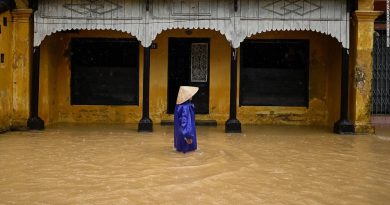