​The growing number of COVID-19 cases in the province without a known source of infection means the virus could be spreading through Alberta communities unchecked, an infectious diseases specialist warns.

“It dramatically lowers the efficiency of contact tracing,” said Craig Jenne, an associate professor at University of Calgary in department of Microbiology, Immunology and Infectious Diseases.

“If we don’t know where you got it, it’s difficult to notify other people who also may have been exposed.”

The numbers should serve as a wake up call to Albertans, he said.

“It makes it very difficult for us to have an accurate picture of where the virus is spreading in the community. What are the sources that are driving this? These are big problems.”

Currently the source of two-thirds of the COVID-19 cases in Alberta is unknown.

But Dr. Deena Hinshaw, the province’s chief medical officer of health, has said the true percentage of unsolved cases is closer to 50 per cent.

During a news conference Wednesday, Hinshaw said the rate of unknown transmissions is concerning but the data should be examined with caution.

Newly-reported cases have yet to be investigated, Hinshaw said. The number of unsolved cases could shrink from 67 per cent as contact tracers begin investigating each case in earnest, she said.

For example, of the 6,110 active cases in the province Tuesday, only 53 per cent were of unknown origin.

“Because the volume of cases we’re seeing every day has been rising, and when we get a new case, an investigation has yet to take place,” Hinshaw said.

“Many of those cases, we will be able to determine the source.”

“It’s just a matter of people getting their tests before the contact tracers have spoken to them,” Shandro said.

The increasing rate of unknown cases comes at critical time with more people in hospital and in ICU for the disease than ever.

Adjusted for population, Alberta now has the second-highest number of active COVID-19 cases of all provinces.

Hinshaw has said the province is at a “critical juncture” in its bid to reverse the trend and suggested that a growing carelessness around COVID restrictions could exacerbate the problem.

While health officials can’t pinpoint the source of all the new cases, there is a clear trend behind the spike in new transmissions, Hinshaw said.

“We do know what the trends are in our own data and those trends match the transmission issues that we’re seeing in other provinces which are social gatherings,” she said.

“They are times when people are spending time together in close contact, not wearing masks, not distancing, not saying home when they’re symptomatic and those are the things we’re really focused on.”

Hinshaw warned if efforts to reverse the trend through voluntary measures fail, further restrictions could be imposed and soon.

“We’ll be watching very closely over the coming days to see if we’ve been able to start turning the corner with our current restrictions or if more restrictions are necessary.”

Meanwhile, Alberta Health and the province is promising to reverse the trend by speeding up test turnaround times and bolstering its team of contact tracers. The contact tracing team, a workforce which has already doubled in size since the pandemic hit, will expand again.

Alberta’s staff of disease detectives will grow from 800 to 1,100 within the next few weeks.

“We are working to reduce the number of unknown cases as soon as possible,” Tom McMillan, Alberta Health spokesperson, said in a statement.

“This is primarily being done by reducing wait times for testing and test results and speeding up contact tracing,” McMillan said. “We have seen wait times lower in recent days as a result of shifts to our strategy and AHS is hiring more contact tracers to expand their dedicated teams.”

Contact tracing is a laborious but critical step in slowing the spread of the virus. Once a person tests positive for COVID, a team of public health begin the work of tracking their movements and close contacts.

“These folks are working, like all of our public health folks, working really long hours,” Shandro said.

Those who may have been infected are informed, tested and often asked to quarantine. The process can involve a few simple  phone calls or be complex and protracted, depending on how many people the infected person has come in contact with.

“The system is working seven days a week,” Shandro said.

“If I could speak on behalf of our contact tracers, they wish that Albertans could follow the public health guidance so there would be less pressure on them but it’s also why we’re continuing to hire contact tracers.”

Jenne said increasing the number of contact tracers and faster testing will help.

Jenne said the job of contact tracers has become more difficult in recent months, he said.

“These are big problems, but they’re also suggesting that people are perhaps having too many contacts in the community.

“What is perhaps even more disturbing is we are seeing increased reports of people not being forthcoming with their known contacts as well.”

Even so, the success of Alberta’s fight against COVID-19 will hinge largely on individual decisions, he said.

“COVID fatigue, it’s real and it’s understandable,” he said. “But it’s also not an excuse.

“We have to do what we can now to not put ourselves in a situation where the public health officials have no option but to bring in restrictions.” 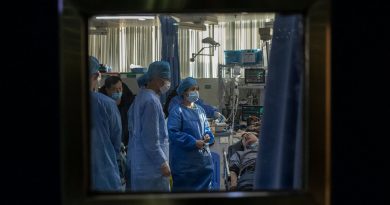 How Beijing Turned China’s Covid-19 Tragedy to Its Advantage ‘How Did We Not Know?’ Gun Owners Confront a Suicide Epidemic