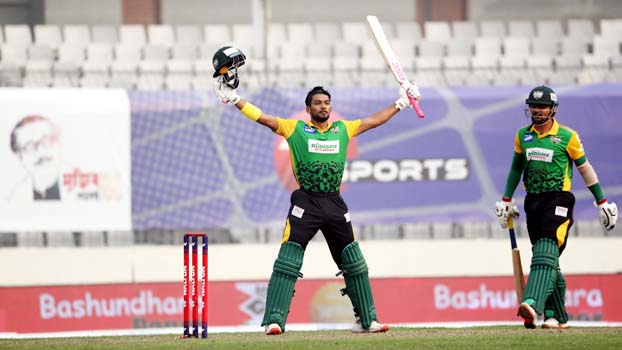 In the 19th over, he blasted Taskin Ahmed’s second delivery towards the deep mid-wicket for a huge six. With this maximum Minister Group Rajshahi’s skipper Najmul Hossain Shanto reached his century.

However, he was not satisfied there. The next delivery from Taskin also received the same treatment as this time it was blasted over the square leg. With that six, Shanto equalled Tamim Iqbal’s record of hitting 11 sixes as a Bangladeshi batsman in T20 format.

Shanto has scored a record-breaking century against Minister Group Rajshahi during the Bangabandhu T20 Cup match at the Sher-e-Bangla Stadium in Mirpur on Tuesday.

This was the first century of the tourney. Minister Group Rajshahi captain played a devastating innings of 109 runs off 55 balls. The left-arm batsman, who reached three figures in just 52 balls, made life really difficult for Fortune Barisal bowlers.

Before returning to the dressing room, he hit 4 fours with 11 sixes. However, his innings went in vain as Rajshahi suffered an 8-wicket defeat even after posting mammoth total of 220/7.

However, no one can overlook Shanto’s innings. Tamim has single-handedly hit the most number of sixes in an innings as a Bangladeshi in T20. The 22-year-old Shanto has now put his name beside the stalwart Bangladesh opener.

Previously, Tamim set the record of hitting the most sixes in T20 format during the BPL final match against Dhaka Dynamites in January 2019. In that match, Tamim played an unbeaten innings of 141 runs off just 61 balls for the Cumilla Victorians. He also hit 10 fours with 11 sixes.

At one stage during his onslaught batting, Shanto also raised the possibility of scoring the fastest century as a Bangladeshi in T20 format. However, he could not break Tamim’s 50-ball century. Later, Fortune Barishal’s match winner Parvez Hossain Emon broke Tamim’s record of fastest T20 centurion of Bangladesh.

During Shanto’s 131 partnership in the opening stand with Anisul Islam Emon, Shanto played shots all around the ground.

Even after Anisul’s departure, the Shanto’s storm continued. As a result, for the first time in this competition, both teams scored 200 plus runs in their respective innings’.

After Tamim, who scored three centuries, Shanto now became the second batsman in Bangladesh to score more than one T20 century. Shanto’s ton celebratory moment was also fascinating to watch. After reaching the milestone, he raised the bat with one hand and held his helmet in the other.

Then he threw his hands towards the sky. At the end, he looked at his team’s dressing room and tried to show his strength by inflating the muscles of both hands. Shanto now holds the credit of scoring the first century of the first edition of Bangabandhu T20 Cup. This is his second century innings in this version of cricket.

He got his first T20I century in the last BPL in January. He hit three figures off 51 balls against Dhaka Platoon for his team Khulna Tigers. In that match, he played an explosive innings of 115 runs off 57 balls with 8 fours and 7 sixes. 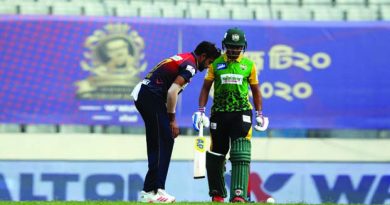