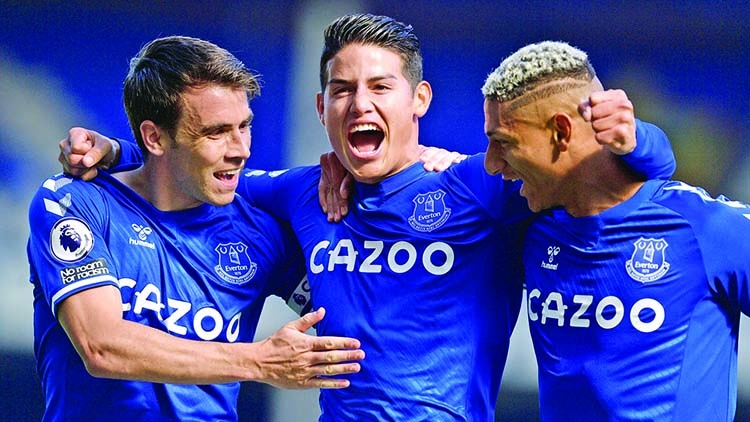 Sports
September 19, 2020 omarmallick 0 Comments
James Rodriguez (C) celebrates after scoring on his home debut as Everton with Seamus Coleman (L) and Richarlison during the during the Premier League match between Everton and West Brom on at Goodison Park on Saturday. -Getty
Dominic Calvert-Lewin hit a first career hat-trick and James Rodriguez scored on his home debut as Everton continued their impressive start to the Premier League season with a dominant win against 10-man West Brom.The Baggies took an early lead through an excellent solo effort by Grady Diangana, who broke from inside his own half before hitting a dipping effort beyond Jordan Pickford for his first top-flight goal.
Everton equalised midway through the first half when the video assistant referee overturned an offside decision after Calvert-Lewin cleverly backheeled into the net for his second goal in as many games.Rodriguez then marked his home debut with a clinical finish on the stroke of half-time, sweeping a low effort into the far corner from Richarlison’s pass.
A crazy few minutes at the end of the first half saw Kieran Gibbs and manager Slaven Bilic sent off for the visitors – Gibbs dismissed for pushing Rodriguez, and Bilic for remonstrating with the officials as they made their way off the pitch at half-time.
Despite that double setback West Brom pulled level straight after the restart when Matheu Pereira curled in a stunning free-kick, but parity was short-lived as Michael Keane stabbed in a loose ball after Sam Johnstone parried Richarlison’s header.
Calvert-Lewin then got his second when he slid in from close range after good work by Rodriguez and Richarlison and completed his hat-trick by heading in Rodriguez’s corner.Everton have won their opening two league fixtures for the first time in eight years, while defeat for West Brom means they are still searching for their first points of the season.
—BBC