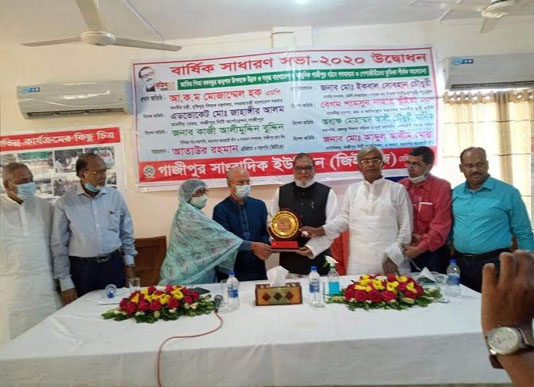 The meeting titled ‘The role of public representatives and professionals in the development of modern Gazipur’ was organised by GUJ on the occasion of its annual general meeting 2020.

“Under the project, the communication system will be modernised to facilitate travelling from Dhaka to Gazipur. Flyovers, drainage facilities and alternative roads will be constructed to reduce the pressure on Dhaka-Gazipur road,” said the minister.

Mozammel also said the traffic congestion will no longer bother as link roads and bypass roads will be constructed along with measures for proper waste management and protection of forests and rivers.

During the meeting, the participators urged the minister to take necessary steps to transform Gazipur into a digital city by 2025, as a part of the implementation of project Vision 2025.

On the occasion of Mujib Year and the founding anniversary of the organisation, the district’s heroic freedom fighters Fazlul Haque and Councilor Abdul Alim Mollah were awarded with ‘Bhawal Padak’. Why JMI Chairman’s bail should not be scrapped, asks HC – National – observerbd.com