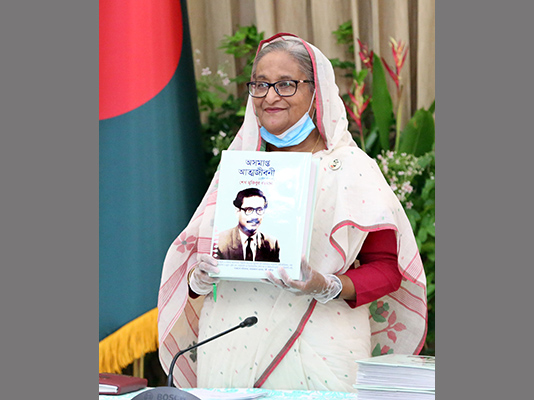 She unveiled the cover of the book at a function from her official Ganabhaban residence here this morning through a video conference.

Speaking on the occasion, the prime minister thanked all particularly the Ministry of Social Welfare for publishing the book in Braille version during the “Mujib Borsho” marking the birth centenary of the Father of the Nation. The book was published in six volumes.

The book was first published on June 18, 2012 in its original Bangla version “Oshomapto Atmojiboni” as well as in English “The Unfinished Memoirs”.

Bangabandhu wrote his autobiography while being in prison from 1967- 1969 in which he narrated his life portraying ancestry, birth, childhood and social and political involvements in student life as well as many political and social events of the subcontinent.

The prime minister said she was really delighted over publishing of the Braille version of “Oshomapto Atmojiboni” through which the visually impaired people would get chance to study the book and thus know the true history of the nation.

In this connection, she said, “I thanked all concerned to publish the ‘Oshomapto Atmojiboni’, written by the Father of the Nation while he was in jail, during the ‘Mujib Borsho’ marking his (Bangabandhu’s) birth centenary.”

She said that the “Oshomapto Atmojiboni” has so far been published in 14 languages and more applications for publishing the book in other languages have also been submitted for approval.

The premier said her father Bangabandhu Sheikh Mujibur Rahman had started writing his autobiography at the inspiration of her mother Bangamata Sheikh Fazilatunnesa Mujib.

Going down the memory lane, Sheikh Hasina, also the elder daughter of the Father of the Nation, described how difficulties they had faced in finding out the script of the “Oshomapto Atmojiboni”.

The prime minister said that the history of struggle for the liberation and the history of language movement had been distorted following assassination of the Father of the Nation in 1975, adding that the name of Bangabandhu had been erased from the history.

She added, “We will be relieved from the distortion to some extent upon publication of the book (Oshomapto Atmojiboni).”

The premier said they have already published six volumes of the secret documents of the Pakistani intelligence agency on Father of the Nation Bangabandhu Sheikh Mujibur Rahman.

“The history of the struggle of the Father of the Nation and how we had achieved the country’s independence have been surfaced through the publication of it (secret documents of the Pakistani intelligence branch on Bangabandhu),” she continued.

Bangabandhu penned his second autobiography the “Karagarer Rojnamcha” (Diary In Jail) while he was in jail after being arrested following announcement of the six-point demand in 1966 and “Amar Dekha Naya Chin” (The New China as I Saw) while being in jail in 1954 about his education trip to China in 1952.

In this connection, she said her sister Sheikh Rehana gave the title of the books, “Karagarer Rojnamcha” and “Oshomapto Atmojiboni”.

The premier said that the emergence of Bangladesh as an independent country and achieving self-dignity as a Bangalee nation is closely associated with the life of Father of the Nation Bangabandhu Sheikh Mujibur Rahman.

“These books have created a scope to know the history of Bangladesh’s emergence as an independence country and achieving self-identity as the Bangalee nation,” she added. 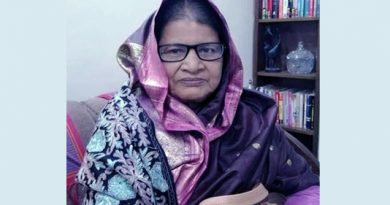 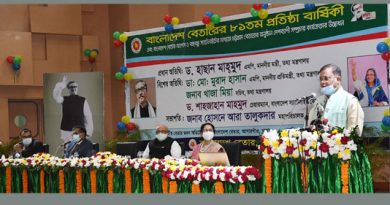