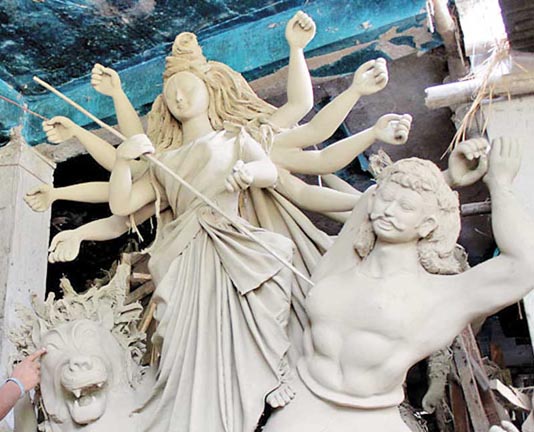 DHAKA, Sept 17, 2020 (BSS)- The country’s Hindu community today celebrated the Mahalaya, the auspicious occasion of heralding the advent of goddess Durga, with due religious fervor and enthusiasm.

Mahalaya marks an invitation of sorts to goddess Durga to begin her journey from Kailash to her paternal home (Earth), along with her children.

This invitation is extended through the chanting of mantras from Sri Sri Chandi and singing devotional songs. Countdown of Durga Puja begins with the celebration of Mahalaya.

Amidst the beating of drums, rituals of Mahalaya began with recitation from holy Chandi. Noted singers performed devotional songs in the morning. A special worship was held at 11am.

Identical programmes were also held at Ramkrishna Mission and Math. Principal of the mission recited verses from Chandi and performed devotional songs.

Temples across the country also arranged programmes to celebrate Mahalaya.

With the beginning of ‘Devipaksha’, Mahalaya is observed six days before Durga Puja, the biggest religious festival of the Bangalee Hindu community.

However, this year, the Shardiya Navratri dedicated to Devi Durga will be delayed by about a month owing to the Adhik Mas (leap month in the Hindu calendar).

Usually, the Devi Paksha commences with Mahalaya Amavasya, but in 2020, the nine-day long festival will be celebrated a month later.

On October 22, the Durga Puja will begin with different rituals on the day of Maha Shashthi.