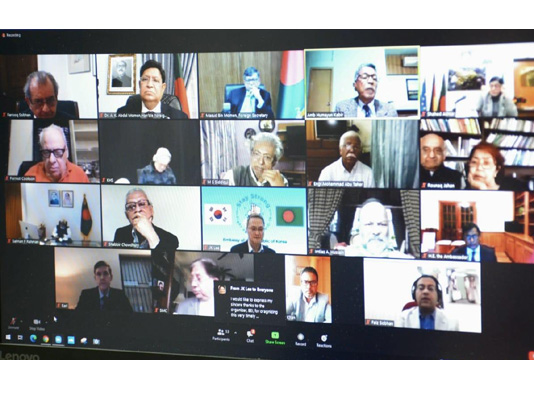 “I am quite hopeful that the steadily growing Bangladesh-US relations is expected to achieve newer height in the coming days during the Biden administration,” he said.

The foreign minister was speaking as the chief gust at a webinar titled “Bangladesh-US Relations: Opportunities and Challenges” organised by Bangladesh Enterprise Institute (BEI).

Dr Momen said Dhaka is looking forward to continue its work together with the new US government to further strengthen the two country’s relationship, address mutual challenges and build progress and prosperity on many fronts.

“There are so many avenues to be opened, and Bangladesh is keen to reap the full potential (with the US),” he said.

With visionary policies undertaken by Prime Minister Sheikh Hasina, Momen said, Bangladesh is fully confident of further strengthening its ties with all development partners to facilitate economic and political cooperation and people-to-people ties, the US being one of the biggest among them.

“Bangladesh has been a leader in regional cooperation and connectivity initiatives, and we welcome US involvement in the existing and the new initiatives,” he said.

In his speech, the foreign minister talked about current various engagements between Bangladesh and US those include, tackling Rohingya crisis, combating COVID-19 pandemic, deportation of Bangabandhu’s convicted killer, trade and investment, connectivity and climate change.

Thanking the USA’s principled stand and steadfast humanitarian and diplomatic support to Bangladesh in dealing with the Rohingya crisis since August 2017, he said, “Good news is, there are indications that the new (Biden) Administration will look into the issue of genocide in the Rakhine state and hopefully will proactively take action for their safe return”.

Dr Momen underscored the necessity to strengthen further bilateral and multilateral cooperation and collective actions between Bangladesh and the USA to tackle the evolving dimensions of health as well as economic crisis during this COVID-19 pandemic as well as during post-pandemic situation.

The foreign minister hoped that the US’s new administration of President Biden would take the issue of deporting Bangabandhu’s convicted killer Rashed Chowdhury ‘seriously’ as it could be a ‘game changer’ in the Bangladesh-US partnership.

He said Dhaka believes that trade and investment can be one of the strongest bonds of partnership between Dhaka and Washington DC as the USA is Bangladesh’s single largest export destination country and the largest investor.

The foreign minister said Bangladesh has emerged as a lucrative destination of foreign direct investment today, and it is keen to operationalize its proposed 100 Economic Zones, and 28 Hi-tech parks with foreign investments from public and private sectors.

“Bangladesh welcomes US investment in these Economic Zones, including through the relocation process from China, he said.

Further he said, Bangladesh believes that US support will continue for the safe and appropriate use of science and technology, including biotechnology, to help meet agricultural challenges and consumer needs of the 21st century.

Dr Momen sought the US investment in infrastructural development of Bangladesh to enhance the effectiveness of the Indo-Pacific strategies in the South Asian region. “We also like to see the Indo-Pacific Strategy as a conduit for inclusive growth in the region,” he added.

Pointing that climate change is an immediate and growing threat to the whole world while Bangladesh is one the most vulnerable countries due to it, he said, It is a matter of relief that President Joe Biden has already signed the Executive Orders to rejoin Paris Agreement.

“I believe that contribution of America in securing Paris Climate Agreement and sincere commitment to climate change as a foreign policy issue will help Bangladesh to fight against this climate change issue,” he said.

Mentioning that there is half a million Bangladeshi-origins live in the US, the foreign minister said this large Bangladeshi diaspora could also play a constructive role in stronger Bangladesh-US ties. 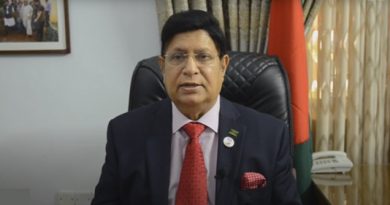