The New Year was celebrated like no other, with pandemic restrictions limiting crowds and many people bidding farewell to a year they’d prefer to forget.

From the South Pacific to New York City, pandemic restrictions on open air gatherings saw people turning to made-for-TV fireworks displays or packing it in early since they could not toast the end of 2020 in the presence of friends or carousing strangers.

As midnight rolled from Asia to the Middle East, Europe, Africa and the Americas, the New Year’s experience mirrored national responses to the virus itself. Some countries and cities cancelled or scaled back their festivities, while others without active outbreaks carried on like any other year.

Australia was among the first countries to ring in 2021 because of its proximity to the international date line.

It is a grim end to the year for New South Wales and Victoria, the country’s two most populous states, which are battling to curb new COVID-19 outbreaks.

In past years, one million people crowded Sydney’s harbour to watch fireworks displays that centre on the Sydney Harbour Bridge, but this year most had to watch on television as authorities urged residents to stay home.

Locations on the harbour were fenced off, popular parks closed and famous night spots eerily deserted. A 9 p.m. fireworks display was scrapped, but there was still a seven-minute pyrotechnics show at midnight.

People were only allowed in downtown Sydney if they had a restaurant reservation or were one of five guests of an inner-city resident. People were not allowed in the city centre without a permit.

Sydney is Australia’s most populous city and has had its most active local transmission of the coronavirus in recent weeks.

“For the first time in many, many years we made the big decision, difficult decision to cancel the fireworks,” Mayor Sally Capp said.

“We did that because we know that it attracts up to 450,000 people into the city for one moment at midnight to enjoy a spectacular display and music. We are not doing that this year.”

In South Korea, Seoul’s city government cancelled its annual New Year’s Eve bell-ringing ceremony in the Jongno neighbourhood for the first time since the event was first held in 1953, months after the end of the Korean War. The ceremony normally draws an estimated 100,000 people and is broadcast live.

Authorities in coastal areas of eastern South Korea closed beaches and other spots where hundreds of thousands of people typically gather on New Year’s Day to watch the sunrise.

Celebrations go on in countries with low cases

Cities and countries that have managed to control the coronavirus got to celebrate.

New Zealand, which is two hours ahead of Sydney, and several of its South Pacific island neighbours that also have no active COVID-19 cases held their usual New Year’s celebrations.

Taiwan hosted its usual New Year’s celebration, a fireworks display by its capital city’s iconic Taipei 101 tower, and a flag-raising ceremony in front of the Presidential Office Building was planned for the morning of New Year’s Day.

The island has registered only seven deaths and just 700 confirmed cases.

In Chinese society, the Lunar New Year, which in 2021 will fall in February, generally takes precedence over the Jan. 1 solar New Year.

The coronavirus ensured more muted celebrations of the Western holiday. Beijing scheduled a countdown ceremony with just a few invited guests, while other planned events were cancelled.

Much of Japan welcomed 2021 quietly at home, alarmed after Tokyo reported a record daily number of confirmed coronavirus cases. The capital reported about 1,300 on Thursday, topping 1,000 for the first time.

Many people skipped what’s customarily a chance to return to ancestral homes for the holidays, hoping to lessen health risks for extended families.

Train services that usually carry people on shrine visits overnight were cancelled. Emperor Naruhito is delivering a video message for the new year, instead of waving to cheering crowds from a balcony outside the palace.

Millions of Indians planned to usher in the new year with subdued celebrations at home because of night curfews, a ban on beach parties and restrictions on movement in major cities and towns after the new, more contagious variant of the coronavirus reached the country.

In New Delhi, Mumbai and Chennai, hotels and bars were ordered to shut at 11 p.m. The three cities have been the worst hit by the coronavirus pandemic.

Drones were keeping watch of people’s movements in Mumbai, India’s financial and entertainment capital. Large gatherings were banned, but there were no restrictions on visiting friends, relatives and public places in groups of not more than four people, police said.

Despite a surge in infections, the Gulf hub of Dubai pressed ahead with its mass New Year’s Eve celebrations, including the annual fireworks show around the Burj Khalifa, the world’s tallest tower.

In many European countries, authorities warned they were ready to clamp down on revellers who breach public health rules, including nightly curfews in France, Italy, Turkey, Latvia, the Czech Republic and Greece.

“No one will be on the streets after 10 p.m. [Athens] will be a dead city to make sure no more restrictions are imposed,” said Michalis Chrisohoidis, Greece’s public order minister.

In Italy, some public celebrations were planned, such as a fireworks display over Rome’s Colosseum, but officials urged people to enjoy them from their balconies or — better yet — at home, on television.

Laid up by a chronic nerve pain condition, Pope Francis skipped a New Year’s Eve prayer service and acknowledged that some might question why they should give thanks in the midst of a pandemic. A Vatican cardinal stood in for the Pope in St. Peter’s Basilica.

WATCH | Rewind 2020: The stories that shaped our world this year: 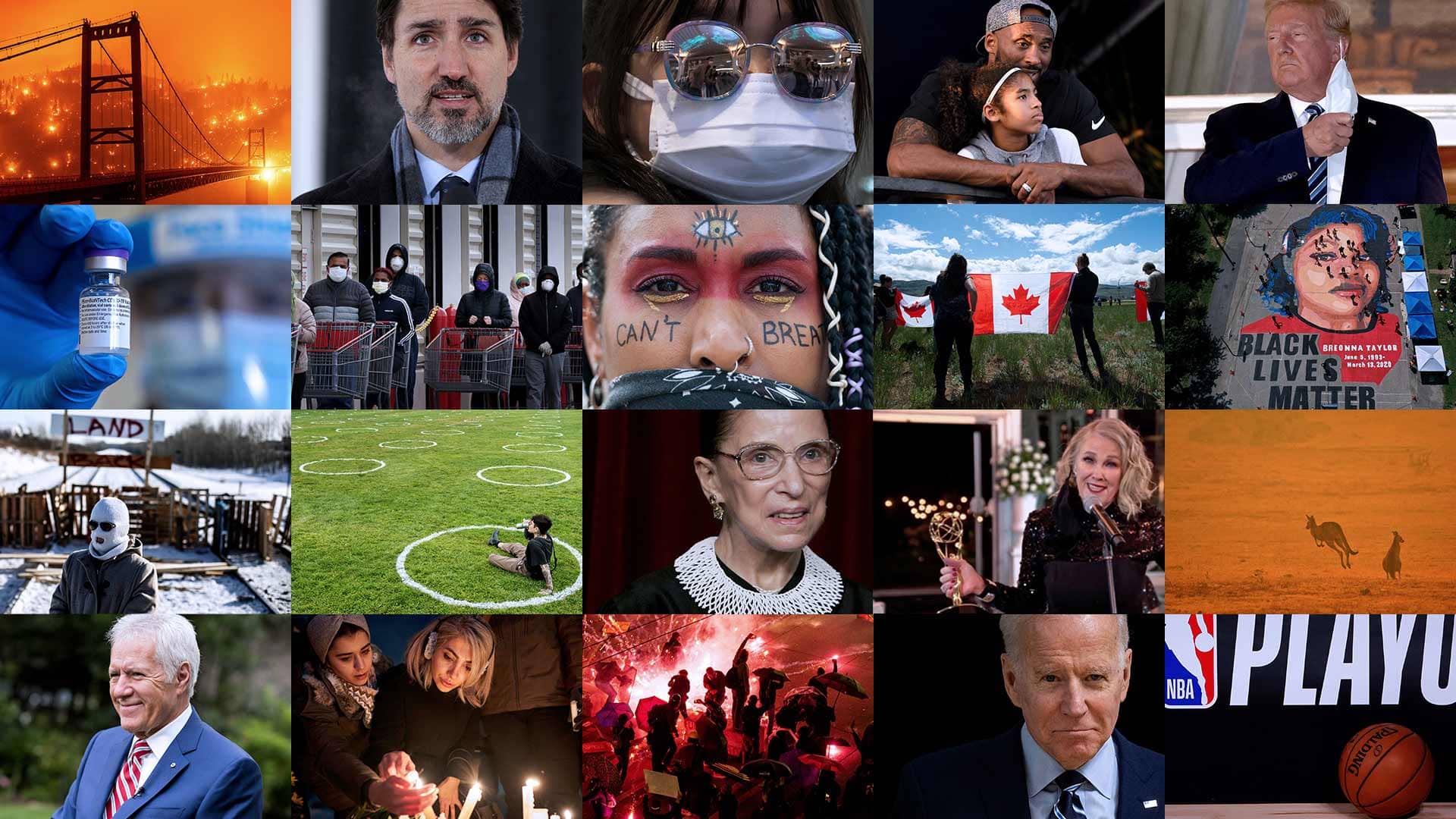 2020 was a year like no other — CBC News revisits the stories that touched hearts, changed perspectives, brought Canadians together and, at times, kept us distanced from the ones we love most. 14:28

A few families gathered in Madrid’s sunny central Puerta de Sol square early on Thursday to listen to the rehearsal of the traditional ringing of the bells that is held at midnight to greet each new year.

They followed the Spanish custom of eating 12 grapes with each stroke of the bells before police cleared the area.

The British government, juggling the twin occasions of New Year’s Eve and the U.K.’s definitive split from the European Union, ran ads imploring the public to “see in the New Year safely at home.”

Most of England’s population is under tight restrictions that prohibit the mixing of households and shut pubs and restaurants.

In Scotland, which prides itself on Dec. 31 Hogmanay celebrations, the government detailed what it expected not to see on New Year’s Eve.

“We must mark this New Year responsibly and in line with the restrictions,” First Minister Nicola Sturgeon said. “To be clear — and I take no pleasure in saying this — that means no gatherings, no house parties, no first-footing. Instead, we should bring in 2021 in our own homes with just our own households.”

Many around the world looked toward 2021 with hope, partly due to the arrival of vaccines that offer a chance of beating COVID-19.

While there won’t be crowds in Times Square, the mayor pledged that the city — which has seen more than 25,000 deaths from the virus — would rebound next year.

“We are turning the page and going someplace better,” de Blasio said.