Police in Belarus arrested at least 146 people who took to the streets on Sunday chanting “I’m going out,” the last known written words of an anti-government protester who died last week, a prominent human rights group said.

Belarus is in political crisis as tens of thousands of people have taken to the streets each week since an election in August, calling for Lukashenko to resign after 26 years in power. Lukashenko has rejected opposition accusations that the election was rigged in his favor.

The street rallies were re-ignited following a death of Roman Bondarenko, a 31-year old anti-government protester. He died in hospital in Minsk on Thursday following what demonstrators said was a severe beating by security forces.

The interior ministry has denied responsibility for Bondarenko’s death, saying he was killed in a scuffle with civilians.

The protesters took to the streets in many cities across Belarus, including Brest and Minsk. Viasna (Spring) human rights group said 146 people had been detained by the police around teh country so far.

Hundreds of protesters, wearing the red-and-white colors that have come to represent the months-long protest movement against Lukashenko, gathered on Sunday for a vigil near Bondarenko’s house.

Witnesses said Bondarenko was detained after scuffling with people in plain clothes who had come to a playground to remove red-and-white ribbons.

Sviatlana Tsikhanouskaya, Lukashenko’s main opponent, who fled into exile in Lithuania after the election, said on social media she supported Sunday’s rallies in memory of Bondarenko.

The European Union, in a statement from its foreign policy department, has called Bondarenko’s death “an outrageous and shameful result of the actions by the Belarusian authorities” who had “directly and violently carried out repression of their own population.”

Thousands of people have been arrested in the months of protests, and rights groups say hundreds of detainees have reported being subjected to beatings and other abuse. 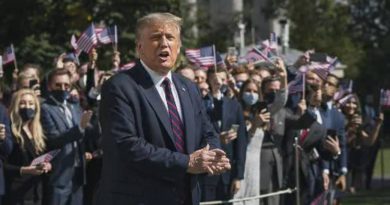