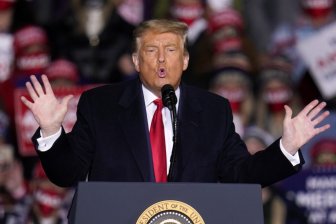 Seven more people, including two underage minors, were handed over to a judge overnight as part of the ongoing investigation into last week’s murder of French teacher Samuel Paty, said an official from the French anti-terrorist prosecutor’s office.

Paty was beheaded on Oct. 16 in broad daylight outside his school in a middle-class Paris suburb by an 18-year-old of Chechen origin. Police shot the attacker dead.

Investigators say the teenager had sought to avenge his victim’s use of caricatures of the Prophet Mohammad in a class on freedom of expression. Muslims believe that any depiction of the Prophet is blasphemous.

The murder shocked France, and carried echoes of the attack five years ago on the offices of satirical magazine Charlie Hebdo, after the magazine had also published cartoons of Prophet Mohammad. Public figures called the killing an attack on the Republic and on French values.

A national tribute in honor of Paty will be held at Paris’ Sorbonne university on Wednesday.

A memorial march was held Tuesday in Conflans-Sainte-Honorine, the suburb northwest of Paris where the attack occurred, near the school where Paty taught.

A French judicial official said on condition of anonymity because he wasn’t authorized to disclose information on an ongoing investigation that 16 other people, including family members of the attacker, were in police custody Tuesday. Judicial authorities have already opened an investigation for murder with a suspected terrorist motive.

Meanwhile, Interior Minister Gerald Darmanin announced the closure of a mosque which had posted a message on social media denouncing the teacher’s course about the caricatures.

Darmanin said on Monday evening that he had ordered the closure of the mosque in Pantin, a suburb northeast of Paris, for six months. Speaking on French television TF1, Darmanin said that the mosque’s leader “relayed the message which consisted in saying that this teacher should be intimidated” and mentioned the address of the school.

Darmanin had previously said authorities were also looking into about 50 associations suspected of encouraging hate speech and the issue will be discussed at a Cabinet meeting Wednesday.

—With files from The Associated Press and Global News