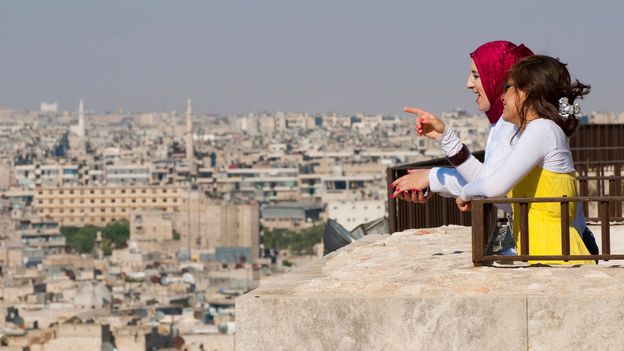 For years, Hamam Khairy’s grandfather worked the land with his siblings and children just outside Aleppo, Syria, singing traditional tarab folk songs along to the local radio station as they picked cucumbers, aubergines and tomatoes. To keep the then-infant Hamam quiet, they sat him in a rubber sack and kept the radio next to his ear so he wouldn’t cry.

For Aleppines, music is in our blood – we can’t help it

“For Aleppines, music is in our blood – we can’t help it,” recalled Khairy, who is now a tarab vocalist himself. This millennia-old musical genre is popular across the Arabic-speaking world, and while many of the best-known tarab musicians are from Egypt or Lebanon, nowhere is it more revered than in the hearts and minds of Syrians – especially in Aleppo, the cradle of the genre.

New Orleans has jazz, Vienna has classical music and Aleppo has tarab. Typically performed on a zither-like instrument called a qanun, a pear-shaped Arab lute called an oud, a long flute called a ney and occasionally a rebab, the world’s oldest bowed instrument, Syrian tarab is classical Arabic folk music where vocalists sing verse-repeating muwashahshat poems for hours on end, triggering a trance-like state in listeners.

That’s because tarab isn’t just a form of music, but a state of being. In Arabic, “tarab” is also a verb meaning a heightened sense of emotion or excitement. And while genres like American blues, Argentine tango and Portuguese fado drip with pain and longing, tarab has been renowned since medieval times for the ecstasy-inducing power it has on its audience, be it through lyrics of joy or sorrow.

New Orleans has jazz, Vienna has classical music and Aleppo has tarab

Culturally, Aleppo’s role as the cradle of this medieval Arabic art makes sense. Its position on the western end of the Silk Road helped it develop as a vibrant musical hub, with Aramaic, Kurdish, Iraqi, Turkish and Central Asian influences. The landlocked city has produced some of the world’s most famous tarab vocalists – such as Sabah Fakhri, Bakri al-Kurdi and Sabri Moudallal – and maintains a reputation for and love of traditional arts. Aleppines take great pride as cultural custodians, and residents of Syria’s largest city have kept the Moorish-introduced muwashahshat poems alive for more than 1,000 years, while the city’s imposing citadel and the nearby Great Mosque attest to the city’s enduring role as a bastion of Islamic culture.

Today, Aleppo’s venerable musical heritage has earned it the title of “The Mother of Tarab”. And just as country singers head to Nashville or techno DJs to Berlin, tarab vocalists know that if they’re going to make it, they have to get past Aleppo’s revered sammi’a: the sophisticated tarab aficionados that serve as the industry’s gatekeepers.

Tarab isn’t just a form of music, but a state of being

“[Aleppo] is its own world,” said Lubana al-Qantar, one of Syria’s premier opera and tarab singers. “They are very proud of their own traditions, and their own more conservative nature. Tarab and the muwashshahatare very ingrained in the Aleppines; the audience there is not normal at all, they are [viscously discerning], and that’s why I love performing there.”

Here, public performances usually begin with a poem about Aleppo, often praising its role in preserving traditional music, before the musicians enter a state of transformative rapture and sing muwashshahat or more colloquial qudud poems in Aleppine dialect. As the oud and qanun weave in and out of plucked scales and harmonies, the vocalist leans into a cantillated, almost hypnotic chant of high-pitched, timbral melodies, binding him or herself to the audience members and beckoning them to interact. But in Aleppo, tarab isn’t just something practiced by trained singers – it’s an integral part of daily life and the soundtrack of the city.

“Until today, in Aleppo’s Old City souqs, most shopkeepers, whether they are selling spices or fabrics, know many of the muwashahshatby heart. They might gather for lunch to sing while they prepare a meal, they might sing verses of a well-known muwashshah like Malaktu fuadi (Captured my heart) from their store to draw customers,” said Khairy.

Though Khairy was forced to flee to Paris in 2013 as the Syrian civil war intensified, he plans to return to Aleppo permanently one day. Earlier this year, he visited briefly, saying, “I needed that energy. Spending just two weeks in Aleppo suffices to fuel [my] creative energy for another 10 years. I may have fled Aleppo seven years ago, but it still lives inside me.”

You may also be interested in:
• Did Syria create the world’s first song?
• The Syrians who saved Main Street, USA
• The last of the good Samaritans

Since the early 20th Century, tarab has traditionally been performed in informal, largely nocturnal gatherings called a jalsah in the home of a well-to-do, music-loving host. This intimate, immersive setting helps musicians and audiences experience the uniquely emotional tarab state of being, which is often described as intoxicating.

Jonathan Shannon, who lived in Aleppo for several years and wrote the book Among the Jasmine Trees: Music and Modernity in Contemporary Syria, described tarab as “integral to the experience of social life in Aleppo”. Public performances are held in venues throughout the city most weekends, and it’s as much of a staple at Aleppine weddings as it is at local nightclubs or cabarets. What’s more, it isn’t just the soundtrack of the city, but essentially a soundscape of the city, as Aleppine tarab often includes more modern poems referencing the chirping nightingales and bulbuls, and the rustles of the weeping willows and jasmine trees found throughout the region.

Aleppo’s rich tarab tradition and the distinct, moving power experienced by listeners led author Helen Russell to include a chapter on Syria in her book, The Atlas of Happiness: the global secrets of how to be happy. In it, she describes tarab as “essentially life support” in times of crisis. According to Russell, tarab’s 30-minute compositions take listeners on an almost cathartic journey. As singers ooze emotion and touch on subjects like romance and religion, she describes listening to live performances as “magical”.

Music and poetic lyrics [of tarab] cleanses the soul from its traumas, and it can even heal physical ills

As Khairy put it: “Music and poetic lyrics [of tarab] cleanses the soul from its traumas, and it can even heal physical ills.”

As Shannon explained, “That’s something that’s really beautiful about Syria, and certainly a cause for happiness, despite the [political landscape]: people turning on their radio or their MP3 player and sitting back and listening to something as a source of solace. It’s a reminder of their heritage, that their culture was extremely resilient for millennia, even if [today] there’s a disruption of a 10-year war or a 50-year dictatorship.”

“Tarab itself is not limited to just song or music…[it] sort of [denotes] oral culture in general,” Shannon added. “So, somebody might [have] ‘a tarab response’ when they hear a beautiful line of poetry.” Elated “Allahs” and “Ya Salams“(both meaning “how lovely!”) or appreciative cries of “Ahhh” and “Ooh” are typical reactions at tarab performances, particularly as performers fall more deeply into saltanah, the creative state whereby they lose themselves and induce a collective hypnosis in the audience.

Although the UN estimates that more than 12 million Syrians have been displaced internally and overseas, the country’s rich musical heritage continues to endure. In 2017, Syrian authorities launched an initiative for Aleppo to be nominated as a Unesco City of Music. That same year, the amphitheatre at the city’s medieval citadel hosted its first tarab concert since the outbreak of the Syrian war in 2011.

As more Syrians take tarab culture abroad, a new generation of listeners around the world is now being introduced to this traditional Arabic genre. Of course, Syrian music going global should not be surprising, given that the country may have birthed the world’s first song, but it is a reminder that even in the darkest circumstances, culture can both thrive and serve as a tool for resilience.

“Half of Aleppo may be destroyed, but Aleppo will remain Aleppo, with its fierce audiences, talented musicians and the energy you wouldn’t find elsewhere,” said Khairy. 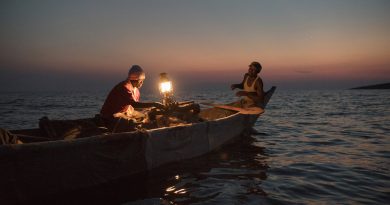 Fishing by Lantern on an Island in Kenya