The first time I met 82-year-old Fernanda Miano was on a sweltering afternoon in early August. She was sitting in a plastic chair and smoking a cigarette in an alleyway outside a basso (street-level home) that she operates as a humble food stall in the historic Naples neighbourhood of Quartieri Spagnoli. It’s called Pizza Fritta da Fernanda and the menu consists of just pizza fritta (fried pizza) in two sizes: grande (large) for €3 and piccola (small) for €2.

Miano, who is lovingly referred to by locals and tourists as “Nonna Fernanda”, learned from her mother how to make pizza fritta on this very street, where the family business has been running for decades.

I ordered a grande pizza fritta from her, unaware that it was going to be as big as my head. Miano put out her cigarette, gestured for me to sit in the chair she was vacating and got to work. She moved quickly, using her fingers to knead dough that was made of Tipo 00 extra-fine flour, yeast, water and a pinch of salt. She then added scoops of crushed tomatoes, pork scratchings, mozzarella and ricotta. Another piece of dough was added as a top layer. Finally, the concoction was flash fried in oil until the filling had melted and the outside was crisp and puffy.

Miano wrapped the end result in paper and handed it to me. She watched as I bit into it and she asked, “Buono?” (“Good?”). I nodded. She flashed a proud and knowing look, something between a smile and a smirk.

You may also be interested in:
• How to make pizza like a Neapolitan master
• New York’s ‘real’ Little Italy
• Georgia’s addictive cousin to pizza

When most people think of Neapolitan pizza, also known as Naples-style pizza, they think of thin-crust pizza baked in a wood-fired brick oven. The dish is so highly regarded that Unesco granted it World Heritage status in 2017. Neapolitan pizza is also the inspiration behind New York-style pizza, which Italian immigrants introduced to the United States in the early 20th Century.

Pizza fritta is the lesser-known cousin of Neapolitan pizza. It emerged as a result of poverty during World War Two, when Naples suffered roughly 200 air raids by the Allies, according to Simone Cinotto, associate professor of modern history at the Università di Scienze Gastronomiche in Pollenzo, Italy, and author of The Italian American Table: Food, Family, and Community in New York City.

“Pizza fritta really looks like a wartime food,” Cinotto said. “There were no ingredients for making pizza and many of the ovens were actually destroyed by the bombings… People had to get creative and ingenious to find replacements for missing ingredients.”

Unable to access – let alone afford – traditional pizza, locals began deep-frying dough and using lower-quality ingredients – such as anchovies and broccoli – purchased spoiled or out of season to make what became known as pizza fritta. The less desirable parts of vegetables, like artichoke stems, were also used. “Whatever you fry becomes palatable,” Cinotto said. He added that the technology and market for fried foods existed and was documented in Italy since well before World War Two, but that pizza fritta was likely a specific result that emerged from the crisis.

Dubbed “the pizza of the people”, street vendors – including Miano’s family – sold the item to struggling customers as “a ogge a otto”, meaning they could eat it that day and pay for it eight days later. The phenomenon even made its way into Vittorio de Sica’s 1954 film L’Oro di Napoli (The Gold of Naples), which contains six chapters set in the city. In the chapter “Pizze a Credito” (Pizza on Credit), a young Sophia Loren portrayed a pizza fritta maker cheating on her husband. She shot to international stardom shortly after.

But not everyone is convinced that pizza fritta’s origins are as straightforward as portrayed in popular culture. “If you look at [Italian] recipe books, even from the 1500s, you do find fried food, fried dough,” said Fabio Parasecoli, professor of food studies in the Department of Nutrition and Food Studies at New York University. “I’m not totally convinced about the theory that it suddenly sprung up after World War Two because there was no food around and it was easier to fry than bake. [Yes], that’s all true. But I think [pizza fritta] was built on [cooking] traditions that were already there.”

These traditions of frying food, however, dipped in popularity over time. Cinotto notes that people in Italy started to become more health-conscious in the 1980s and ‘90s. He also cites pizza fritta’s affiliation with the lower classes as a reason for it losing its allure during this time period.

Pizza fritta is the lesser-known cousin of Neapolitan pizza

According to Cinotto, the urban, middle class in the south of the country, where pizza fritta was common, did not view fried food favourably again until the last decade. He says that’s when trendy Naples restaurants reintroduced it on their menus and photos of pizza fritta garnered attention on social media.

One of those popular pizzerias is owned by 27-year-old Isabella de Cham. She opened her eponymous, all-women-run restaurant two years ago in Naples’ Rione Sanità neighbourhood after working at Pizzeria Gino Sorbillo at and La Masardona, both hot spots hailed for their pizza fritta.

“I have always liked pizza fritta. When I was little, I would always have pizza fritta on Sunday mornings,” she recalled.

But De Cham says she noticed that when she first entered the food industry, many people viewed her favourite dish as “junk food” and avoided it. She decided that she wanted to elevate pizza fritta’s image from “old-school” ingredients – like Nonna Fernanda’s pork scratchings – and created a menu dedicated to elegant variations such as crispy octopus, seared escarole and Stilton cheese.

“Our slogan is ‘Pizza fritta like you have never eaten it before’,” she said.

While it may be difficult to determine pizza fritta’s exact origins, 22-year-old Francesca Stanziola, a Naples local who manages the bed and breakfast Museo19, believes the food is an emblem of Neapolitan pride. She, like many of her friends, has parents and grandparents eager to pass on the stories about the city’s traditions and history – including pizza fritta. She says it’s especially important because her generation could be the last to experience the people and businesses that survived World War Two.

Stanziola, in fact, was the one who suggested I visit Miano’s no-frills stall during my stay in Naples.

“Fernanda is a true Neapolitan woman. There aren’t many people like her left,” she told me. “If you visit Naples and want to understand and appreciate its history, you have to try pizza fritta like hers.”

When I returned a few weeks later to see Miano again, she was sitting again in the plastic chair outside her store, this time sans cigarette. She agreed to tell me more about herself, but only after I ordered three pizza fritta from her. “I’m very busy and can only talk to you when I’m working,” she said.

Miano was not surprised that I was curious about her. In 2018, British chef Jamie Oliver visited her to learn how to make pizza fritta himself. She was featured on his TV show Jamie Cooks Italian, which prompted a surge in tourists visiting her shop. But Miano seemed more pleased about her status as a local legend. She beamed whenever a neighbour stopped to chat or someone waved from a motorbike as they whizzed by. I noticed that this happened very frequently.

“I was already famous here before he [Oliver] came,” Miano declared, as if reading my mind. And again, she flashed me that proud and knowing look, something between a smile and a smirk. 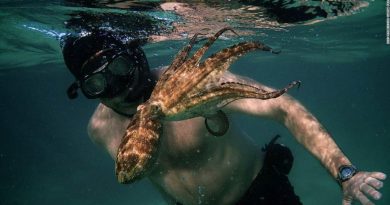 ‘My Octopus Teacher’: The incredible tale of a South African diver who formed an unlikely bond with an octopus