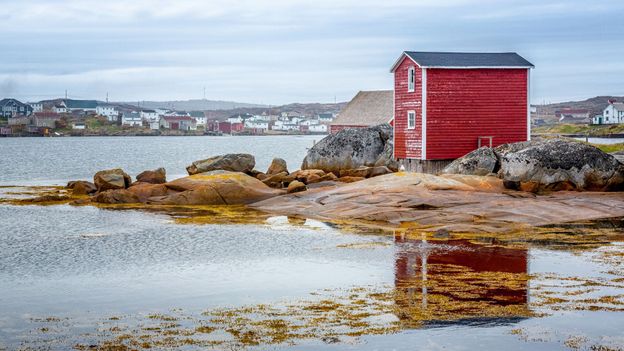 From almost anywhere, it’s a long journey to Fogo Island off the north-east coast of Newfoundland, itself an island off the east coast of Canada. But when I arrived in the little village of Tilting – having disembarked the ferry from “mainland” Newfoundland and driven to the island’s eastern side – I might have believed that I’d slipped past the North American continent entirely and sailed all the way to the other side of the North Atlantic.

Jutting out of the east of Fogo Island, Tilting looks across the ocean towards Ireland. But turn inland and you’ll find Ireland there too. A welcome sign on the side of the road announces “Fáilte go Tilting” (“Welcome to Tilting” in Irish) and shamrocks adorn buildings and flagpoles. Nothing, though, quite prepares you for the accent. As I sat down in Sexton’s Café, I was quickly drawn into conversation with the few other customers. Their voices sounded familiar but unexpected. Were they Irish? I wondered. Tilting is Irish, I was told.

“It’s a predominantly Irish settlement,” local resident Maureen Foley later told me. “The Irish came here pre-famine, in the early-to-mid 1700s, because they came for the fishing, and they decided to stay.” Foley pointed out the Old Irish Cemetery, which is believed to be the oldest of its kind in Canada, with its Celtic crosses and headstones inscribed with such birthplaces as Youghal and Dungarvan, to illustrate the depth of Irish heritage here.

Thanks to the isolation of this far-flung village – which got roads only in the mid-20th Century – their accents have been perfectly preserved in their descendants – the Foleys, McGraths, Dwyers and Murphys – who still call the place home. So pure are the villagers’ accents that it even causes confusion in their ancestral homeland. Often on visits to Ireland, said Foley, “everyone would ask: ‘what part of Ireland are you from?’ And we’d have to explain.”

Named “Talamh an Éisc” (the Land of the Fish) by the many Irish fishermen who arrived on its shores in the 18th Century, Newfoundland is the only place outside Europe that has an Irish language name. “Outside of Ireland itself,” wrote the Irish historian Tim Pat Coogan in Wherever Green is Worn, “there is probably no more Irish place in the world than Newfoundland.” Fogo Island, though, is home to what might be the province’s most Irish place of all: Tilting, which author Anne Enright described for the Irish Times as “straight Irish … Irish on the rocks”.

Tilting occupies a windswept, subarctic landscape of rock- and kelp-smothered shore. The weather is often wild, but on the morning I arrived, the water of Tilting Harbour was so still it crisply reflected the red ochre buildings perched on stilts and the wobbly fishing stages and flakes (platforms used for drying and salting fish) that were tightly clustered around its shoreline. Under a storm-washed sky, Tilting appeared frozen in place, as if in a photograph captured at the very moment before the old, weather-battered buildings finally collapsed into the water. But the precariousness with which the buildings hold onto the rocky shore belies the strength and endurance of the people who built them.

Winters are long on Fogo Island and the farming season is short. It may appear inhospitable, but for centuries Tilting provided excellent access to the cod-rich waters just offshore. Prior to European settlement, the Beothuk people fished here, but are not believed to have had permanent settlements. The French started coming for the cod in the early 16th Century but didn’t stay either. In the early 18th Century, the English and Irish began settling the island, and by the end of the century, Tilting had become an exclusively Irish community. It was a challenging place to live, but the fishers endured the harsh conditions and earned a living by heading out to sea in their small wooden boats.

You may also be interested in:
• A strange welcome in Canada
• Where you can see the Earth’s “soul”
• The little pony that built Newfoundland

In the mid-1960s, however, overfishing by large, powerful ships caused the inshore fishery to collapse, and by 1992, the once-plentiful stocks had come so close to extinction that the federal government declared a moratorium on fishing the North Atlantic cod (today, quotas remain in effect). In turn, many lives collapsed, too. Their livelihoods lost, many islanders left Tilting and Fogo to find work elsewhere. As populations declined, the Newfoundland government began to coerce and even force people to leave their small, remote communities. Fogo Islanders were targeted for resettlement, but they resisted. “We were told, ‘burn your boats, sink or swim’,” local newspaper editor Carol Penton later said in an interview. “So, we chose to swim.”

Home, and its centuries-deep heritage, was worth fighting for.

Fogo Island found international fame when the luxury hotel Fogo Island Inn opened in 2013. Native islander Zita Cobb had returned home and used part of the fortune she’d made in the fibre optics industry to set up the Shorefast Foundation through which hotel profits are reinvested into localised programmes that benefit the community. Another Shorefast initiative, Fogo Island Arts, provides artist residencies in four art studios: small contemporary purpose-built structures scattered around the island like Easter eggs. But while Shorefast put Fogo Island firmly on travellers’ maps, Tilting had already been quietly working on a similar effort.

“A lot of the visitors who come to Fogo Island, they think there was nothing going on [before],” Jim McGrath, chair of the volunteer-run Tilting Recreation and Cultural Society (TRACS), told me. “But we were active about 15 years before Shorefast got off the ground.”

TRACS was founded in 1992, the year of the cod moratorium – “a pretty traumatic time in Newfoundland” – to address the social, cultural, recreational and economic concerns of the community. “What we tried to make front and foremost of everything,” said McGrath, was that “our Irish heritage was maintained.”

Over the past three decades that has taken many different forms, including creating hiking trails in the community to draw tourists; establishing an art residency (first for Irish artists, now for artists from around the world); launching a community radio project to share stories and songs; establishing the annual Irish cultural festival, Feile Tillting; and restoring representative examples of vernacular architecture, including traditional stages, stores and houses. The society’s efforts led to Tilting being designated Newfoundland’s first Provincial Heritage District in 2002 and as a National Historic Site of Canada in 2003. Tilting was awarded its national designation because, Parks Canada states, “it possesses a landscape illustrating adaptations of Irish settlement patterns”.

Those settlement patterns are reflected by the colourfully painted houses facing the harbour where shared fishing premises are spread along the shore and clustered together in neighbourhoods that take the names of the families living there. These families retain the dialects of the particular parts of Ireland their ancestors came from: largely Wexford, Waterford, Tipperary and Cork counties.

But even though it’s marked as a heritage site, Tilting remains a working community. Careful to avoid turning the village into something static, “which is a boring and monotonous type of a setup,” said McGrath, TRACS calls its restoration work “the living museum process”. “All the buildings that we’ve restored are being used by the people of Tilting and they are open to anybody who comes to Tilting who wants to use them”, whether they are artists or fishers salting cod.

The living nature of Tilting’s built heritage is perhaps best seen in its tradition of “launching”, which continues to this day. Constructed without foundations, Tilting’s older houses and outbuildings were designed for mobility. Houses are sold separately from the land, which allows families to move or “launch” their homes to new locations. “Land is extremely scarce in Tilting,” explained McGrath. “So, if somebody in a family passes away and there’s a vacant house, they don’t need it, so they sell it. But you’ve got to move it off their land; so, you take it and you move it over onto a bit of land that you got.” Launching is a community effort, requiring a team of up to 30 men to pull the building (a sizable portion of its around 250-person population). “We put it on skids and away we go,” said McGrath.

While there’s an emphasis on maintaining its built structures, Dan Murphy, TRACS’ vice-chair, points out that Tilting’s heritage is as much in the intangible. “Tilting was probably the first community in Newfoundland to recognise value in everyday houses and stores – the built heritage of a community,” he said, but those buildings also hold “the lives of the people that grew up here for hundreds of years: those are vessels in which this culture lived and is still here today in the dialect, the songs and the stories”.

The best time to experience this living heritage is during the annual Féile Tilting festival, held over four days in September. The festival began with an Ireland-Newfoundland exchange, which brought Irish singers and storytellers to Tilting, and has evolved over the past 11 years to include workshops and shed crawls – a kind of pub crawl for this Irish village with no pubs.

If you can’t make it to the festival, you can experience a typical Tilting shed party by stopping by Foley’s Shed, an unlikely local hotspot. In 2012, a group of young Irish contractors were staying in Tilting while working on the soon-to-open Fogo Island Inn. Maureen Foley’s husband Phil invited them to bring a couple of beers and come over to his shed, then used mainly for storing tools but kitted out with a sofa, wood stove and guitars. Maureen Foley explained how it found local fame: “Once word got out that the young Irish fellows – young, handsome Irish fellows – were at Foley’s Shed on Saturday night, well, crowds gathered.” The Irishmen “couldn’t get over” the accent, Foley said, adding that, in Tilting, they found an Ireland of a different era: “They were in their 20s and 30s so, to them, Tilting seemed like what they would hear their parents talk about.”

These shed parties, which involve “sitting around, having a chat and a few drinks and a few songs,” said Foley, live on and get to the heart of the heritage and sense of community of Tilting. And they are open to all. “There’s a shamrock in the front window that faces the road,” he added. “If the shamrock is lit up, we’re there, and anyone or everyone is welcome.” 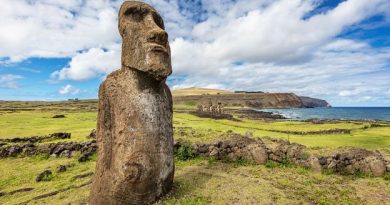 BBC – Travel – The origin of the word ‘taboo’ 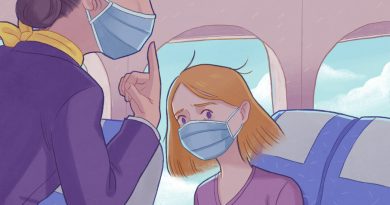 Help! How Can I Help My Toddler Wear a Mask on a Plane?