For more than 13 years, astronomers have been trying to determine the source of extremely powerful radio bursts that can travel billions of kilometres through space but only last a fraction of a second.

These signals — called fast radio bursts (FRBs) — were discovered in 2007 by two astrophysicists while poring through data collected in 2001 from the Parkes Observatory in New South Wales, Australia. Since then, dozens more have been detected, even a different form called repeating fast radio bursts.

But just what is responsible for pumping out these extremely bright radio signals has remained shrouded in mystery, with even the odd whisper of whether or not it was astrophysical in the first place.

Magnetars are a fascinating type of neutron star, the collapsed core of a massive star that exploded. They are spheres that are roughly the size of a city like Toronto or Montreal, but so dense that a piece of material the size of a sugar cube would weigh as much as a mountain, or one trillion kilograms.

Over the past decade or so, there had been several theories as to what could produce FRBs, one of which was a magnetar. But the sources of the brief but powerful signals were too far away to confirm.

But on April 28, astronomers using the Canadian Hydrogen Intensity Mapping Experiment (CHIME) telescope in Penticton, B.C., and the Survey for Transient Astronomical Radio Emission 2 (STARE2) telescope captured an FRB burst from the same region of the sky. The pair of telescopes were able to confirm that it has been emitted from SGR 1935+2154, a known magnetar. 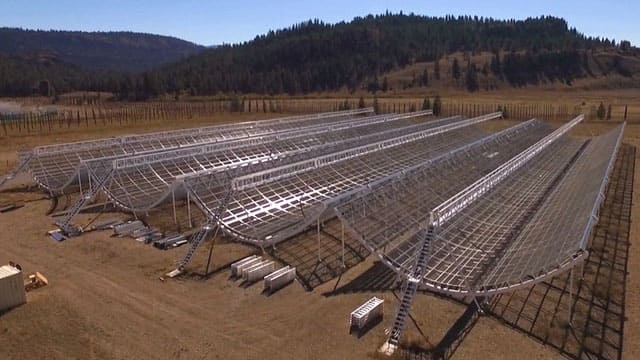 Scientists hope CHIME, Canada’s largest radio telescope, will be a major step forward in uncovering the secrets of the universe 2:04

“When I looked at the data for the first time, I froze and was basically paralyzed with excitement,” said Christopher Bochenek, an astrophysicist at the California Institute of Technology in Pasadena, Calif., who is the lead author of a second paper. “Then it took me a few minutes to collect myself and make the call to a friend to be able to actually sit down and make sure this thing was actually real.

“In about one millisecond, this magnetometer emitted as much energy in radio waves as the sun does in 30 seconds.”

FRBs have been detected billions of light-years away, such as one called FRB 121102, discovered to repeat by Canadian astrophysicist Paul Scholz.

But what makes this new FRB — designated FRB 200428 — particularly interesting is that it lies a mere 30,000 light-years away.

“FRBs … are generally millions to billions of light-years away from us. But this thing is in our galaxy and much closer to us,” Scholz said. “Compared to [other] FRBs, it’s in our backyard, so we can study it in much more detail.”

While the discovery is exciting, it still doesn’t put the mystery completely to rest.

“This event detected is a strong hint that magnetars that we have in our galaxy, the physical mechanism that’s going on there, is what could be causing FRBs — at least a portion of the FRB population,” Scholz said. “It certainly doesn’t solve the FRB problem completely, but it gives us a very strong indication that magnetars are capable of producing the types of emission that we see from FRBs.”

And what’s more, though astronomers now seem to have at least one potential source, it doesn’t explain the mechanism behind what is creating these powerful but brief bursts.

“Emission mechanisms in physics and astronomy are hard to nail down in the details,” Scholz said. “There is a neutron star that has an extremely high magnetic field, and … it tells you that the magnetar, the neutron star, and it’s magnetosphere are powering that event. How exactly the energy from the magnetic field gets released as radio emission? I think theorists will debate that for decades.”

Subsequent follow-up by the Five-hundred meter Aperture Spherical Telescope (FAST) in Guizhou, China, supported the observations, although the lead author of that paper said he had his doubts.

“With CHIME and STARE2, I was actually not very optimistic. I thought, because FRBs from small distances are not very bright and repeating, so probably you don’t have a smoking gun,” said Bing Zhang, an astrophysicist at the University of Nevada, Las Vegas.

That’s because there were so many — nearly 50 — models of what could be producing these bursts.

“However, this discovery in our backyard … tells us that they are actually coming from magnetars. And now, we can say that at least one model can [create] at least some, and probably all FRBs in the universe,” said Zhang.

Astronomers now hope that more FRBs can be traced back to other magnetars in our solar system, of which roughly 30 are known.

Is small-scale nuclear energy an option for the N.W.T.?