Tara VanDerveer made history, and then took a moment to tell her Stanford players what they mean to her.

“The most important thing I can do as a coach is love you,” VanDerveer said. “I love the game of basketball and I want to help you be the best you can be. You’re the people that I care about. Thank you.”

Typical Tara, wanting to share the joy on a night when the spotlight shined brightly on her — and her alone.

VanDerveer became the winningest women’s college basketball coach Tuesday night, passing the late Pat Summitt with her 1,099th victory as No. 1 Stanford romped to a 104-61 victory over Pacific.

Dressed casually in all black, VanDerveer received the game ball after the final buzzer. Her dancing players chanted “Tara! Tara!” and gave her a new oversized pullover reading “T-DAWG” to celebrate the latest milestone for the Hall of Fame coach in her 35th season on The Farm and 42nd overall as a college head coach. The wearable blanket was forward Francesca Belibi’s idea. 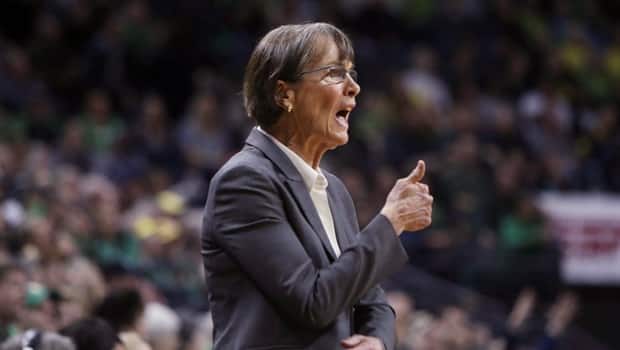 The longtime Stanford coach passed Tennessee’s Pat Summitt for the record-setting 1,099 win of her career. 0:36

“This is special because of the magnitude of that many wins,” VanDerveer said. “You never go into coaching, I never thought, ‘Well, I’m going to try to win 1,000 games’ or anything like that. This is special, currently having the No. 1 team, being undefeated, playing in a pandemic, I will never forget this, for sure.”

After the history-making win in a draped-off area upstairs that served as Stanford’s locker room, VanDerveer received a plaque containing a piece of the floor from Stanford’s home court at Maples Pavilion. A framed proclamation from Palo Alto Mayor Adrian Fine was another memento. White long-sleeved shirts commemorating the night were made for the players as well as hand-held confetti poppers and individual mini cakes with an attached sticker that read, “Tara at the top.” Silver balloons with the numbers 1,099 adorned the room.

Pat would be proud.

Just as the humble VanDerveer prefers, she broke Summitt’s mark going largely under the radar and with little fanfare given the game took place in California’s Central Valley — about 80 miles from the Bay Area. No fans were allowed into Spanos Center, either.

“I really hope Pat Summitt is looking down and saying, `Good job Tara, keep it going,”‘ VanDerveer said. “I loved coaching against Pat, and we miss her.”

Tennessee women’s basketball posted a photo of VanDerveer and Summitt on Twitter and a message that read: “1099. Pat would be proud. Congratulations, Coach VanDerveer!”

“We were friends and obviously competitors,” VanDerveer said. “She had great passion for the game and I think she sees that with me. She loves unselfish basketball which I think she would see with our team. More than anything she helped me get better as a coach because you had to work really hard to prepare. We lost more games than we won against Tennessee. She was a great mentor and a great friend. I think she would be proud of us.”

Stanford (5-0) couldn’t play a home game with the Tigers on Nov. 29 because of a positive coronavirus test in the Pacific program and then again Tuesday because of COVID-19 restrictions in Santa Clara County that sent the Cardinal on the road for three weeks. It spent much of that stretch in Las Vegas before travelling to Berkeley to play California in a Sunday night game, when VanDerveer tied Summitt’s record.

“I look at it as a blessing in disguise. We’re living in a hotel,” senior Kiana Williams said. “It’s not ideal but we have more time to spend together.”

Travelling from Berkeley on Tuesday, Stanford wound up getting caught in traffic due to an accident that delayed the Cardinal’s arrival at the arena by 30 minutes.

Anna Wilson got Stanford off to a fast start with an opening four-point play.

“That’s why I came to Stanford, I wanted to be coached by a winner,” Wilson said. “Even in this challenge of being in the middle of quarantine and having to deal with all these adjustments, she’s done a really great job of being here for us and providing the very best that we can experience during this time.”

VanDerveer thanked her parents and family.