Mark McKenzie and Jamiro Monteiro added singles with Kacper Przybylko contributing three assists for a rampant Philadelphia. The margin of victory could have been higher had it not been for some fine saves by overworked Toronto ‘keeeper Quentin Westberg.

The lopsided win moved the Union into first place in the league and Eastern Conference on goal difference over Toronto with both teams at 12-3-5. TFC had gone 7-0-2 since suffering a pair of losses Sept. 1 and 5, against Montreal and Vancouver respectively.

It marked the first time Toronto had given up five goals since a 5-1 loss to Houston in April 2018. That day, Toronto fielded a second-string lineup in advance of a CONCACAF Champions League game.

Philadelphia ran its undefeated streak to five (4-0-1) since a 2-1 loss to Toronto on Oct 3 in East Hartford. The Union also improved to 7-0-0 in league play this season at Subaru Park, which has opened its door with local authorities allowing 15 per cent capacity or approximately 2,775 spectators.

Philadelphia wasted little time taking it to a Toronto lineup missing some big names through injury. Used to being the hammer, Toronto was the nail on this night and found itself down 2-0 after 33 minutes.

Santos’ hat trick came in the 68th minute, with the unmarked Brazilian knocking in an Aaronson cross over Westberg. It raised Santos’ season goals total to seven. 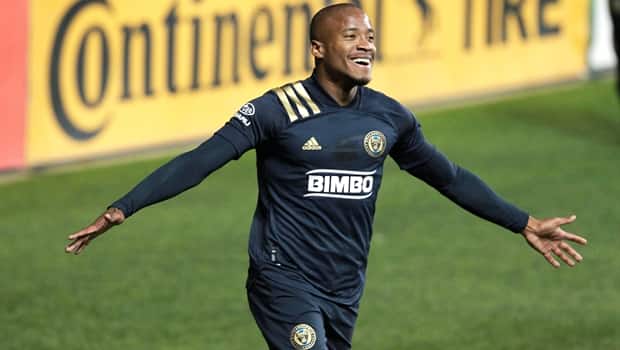 Sergio Santos scores his third goal of the night as his Philadelphia Union pile five goals into the Toronto net. 1:27

Toronto captain Michael Bradley, who came off the bench last week in his return from a knee injury, made his first start since Sept. 1. It represented his 200th career MLS regular-season start.

But Vanney had plenty of other injury concerns including designated player Pablo Piatti who sat out with calf tightness.

Centre back Chris Mavinga and striker Ayo Akinola missed their second straight game with hamstring issues. Midfielder Jonathan Osorio, who left last week’s 1-0 win over Atlanta after just 20 minutes with a hamstring injury, did not dress.

Star forward Jozy Altidore, another Toronto DP, is a long-term casualty with a Grade 2 hamstring strain.

Justin Morrow, who had missed the last four matches with a calf strain, and Fraser replaced Auro and Marky Delgado at halftime.

Midfielder Jahkeele Marshall-Rutty, who turned 16 on June 16, became the youngest player to appear for TFC when he came in the 72nd minute — four minutes after Santos exited to applause.

TFC has three regular-season games remaining — at New York City FC, versus Inter Miami and at the New York Red Bulls. Auro will miss the midweek NYCFC game due to yellow card accumulation.

Ali Adnan and Tosaint Ricketts each scored a goal as the Vancouver Whitecaps defeated the San Jose Earthquakes 2-1 at Providence Park in Portland, Ore.

The Whitecaps hoped to remain in a playoff position in the Western Conference standings with a win. They entered the game in a three-way tie for the eighth and final playoff spot with Real Salt Lake and Houston. Vancouver’s win now puts them level with San Jose on points as they both are tied for seventh place, but the ‘Caps have two more victories than the ‘Quakes.

The Whitecaps found themselves down 1-0 after a goal from Carlos Fierro in the 24th minute. Cristian Espinoza sped up the wing and launched the ball into the box. Fierro then volleyed the ball into the net and past ‘keeper Evan Bush to open the scoring. 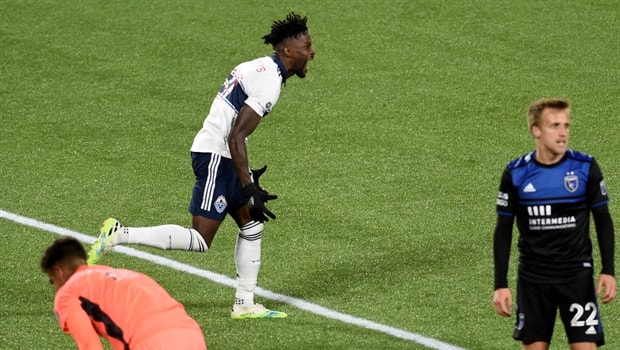 Vancouver entered halftime down one goal, but they responded with two of their own in the second half.

Ali Adnan equalized at the 51st minute of the game with a curling free kick from 32 yards away that beat ‘Quakes goalkeeper James Marcinowski.

Vancouver would eventually take the lead thanks to Tosaint Ricketts later in the half. Cristian Dajome fired a shot on net that Marcinowski initially saved. But the ball was deflected towards Ricketts’ foot. He then tapped it into the net to give the ‘Caps a 2-1 lead.

The Whitecaps will be back in action Tuesday night against the Seattle Sounders in Portland.

Impact allow 3 goals in 2nd half in loss to NYCFC

New York City FC got goals from three different goal scorers as they defeated the Montreal Impact 3-1 at Yankee Stadium in the Bronx.

Jesus Medina, Maximilliano Morales and Tony Rocha each scored for NYCFC (9-8-3) as they handed Montreal its third loss in its last four games. Romell Quioto scored the Impact’s (7-11-2) only goal.

WATCH | Impact collapse in second half: 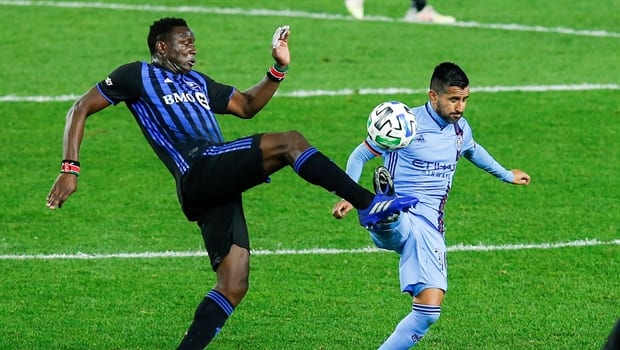 After a scoreless opening half, 4 goals are scored in the 2nd half as Montreal falls to NYCFC 3-1. 1:22

NYCFC’s victory puts them in fifth place in Major League Soccer’s Eastern Conference. The team is a perfect 9-0-0 when they score the first goal of the game.

Impact goalkeeper James Pantemis was put to work as early as the fifth minute of Saturday night’s contest as he made a highlight-reel save on a Maximilliano Morales shot. As the Montreal native dove to his right, he was able to deflect the ball out of play with his right hand.

Through 45 minutes of scoreless play, Pantemis had already made four saves.

But his attempt at a clean sheet would be tarnished in the second half after Medina’s goal.