The Vancouver Canucks’ so-called “lotto line” is starting to cash in.

The top trio of Brock Boeser, Elias Pettersson and J.T. Miller — dubbed the lotto line for their jersey numbers 6, 40 and 9 — combined for three goals and five points Wednesday as the Canucks downed the Ottawa Senators 5-1.

Miller had two goals and an assist in the victory, but feels he and his linemates have more to give.

“I think we need to push ourselves,” he said. “I know it looks pretty for you guys because I got some points today but at the same time there’s not much difference in the game.”

The line did appear to find its latent chemistry on Wednesday, however. 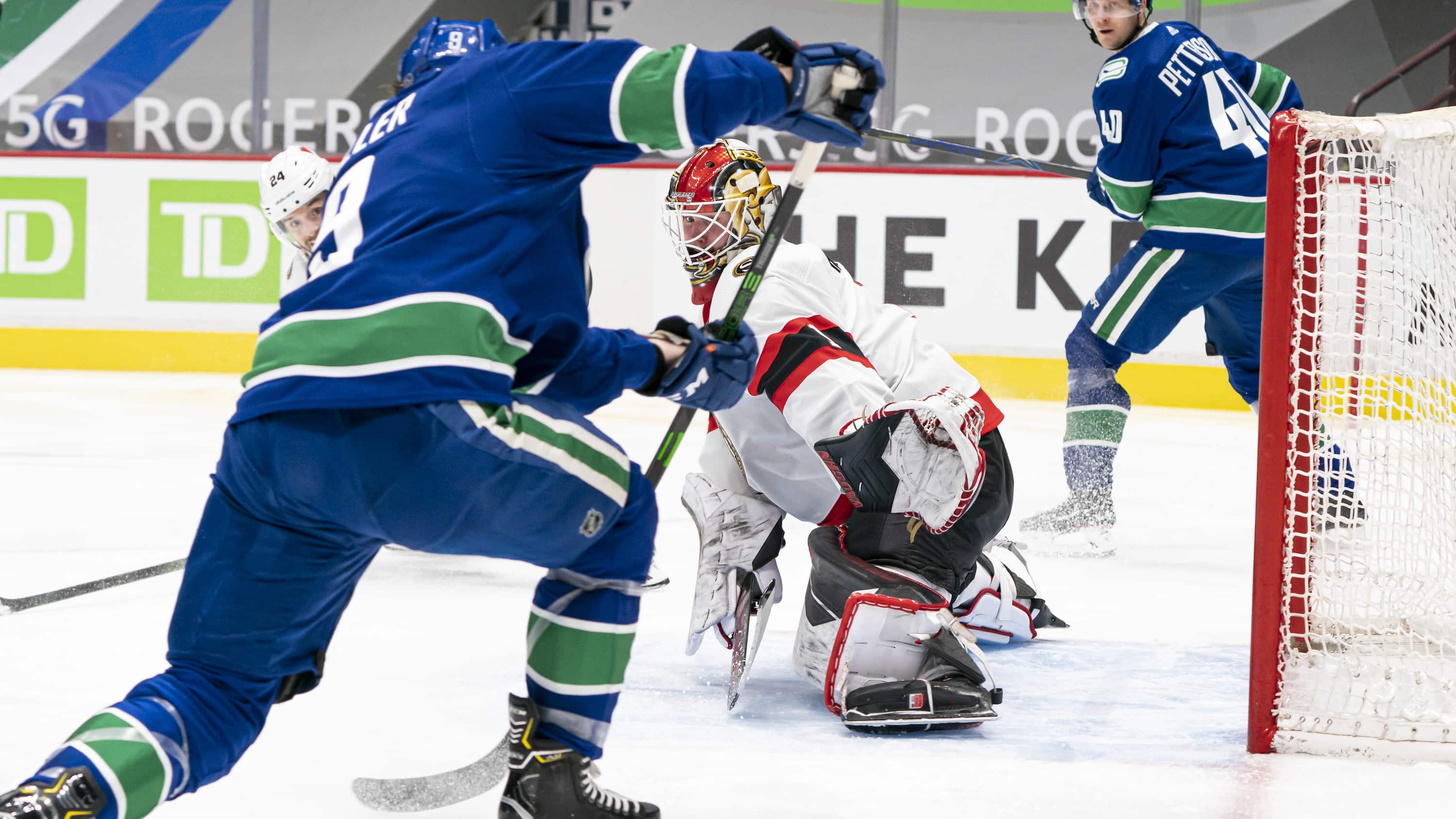 J.T. Miller and Tyler Motte each record a pair of goals as Vancouver defeats Ottawa 5-1. 1:06

Early in the second frame, Pettersson looked as if he were about to wind up for a big shot on a breakaway, then dropped a pass to defenceman Quinn Hughes instead. Hughes slipped the puck to Miller and the winger buried it from in tight.

It was Miller’s first goal of the year. Last season he led the Canucks in scoring with 72 points (27 goals, 45 assists) in 69 regular-season games.

The NHL’s COVID-19 protocols kept him out of the lineup for Vancouver’s first three outings this year.

Miller admitted that he initially struggled after returning to the lineup.

“Sure at the beginning, probably the first three games. My legs were seizing up like halfway through the games and it was hard. I definitely had couch legs,” he said.

“But last three or so I felt pretty good. Obviously, I would like to be better on a personal standpoint but my legs weren’t the issue. I was skating well, just wasn’t making the plays I wanted to with the puck in the hard areas.”

Miller also assisted on Pettersson’s goal Wednesday night, a blast from the point on a second-period power play.

The Swedish centre has been limited to two goals so far this year, and said he’s felt the crunch to perform.

“There’s always pressure and I’m the guy that puts the most pressure on me,” Pettersson said. “I always want to play good and I’ll be honest, my first couple of games haven’t been the way I want to play. Today was definitely a step in the right direction, but me and our line, definitely have a lot more to give.”

Tyler Motte also scored twice for Vancouver (4-5-0) on Wednesday, helping the Canucks string together back-to-back wins for the first time this season.

Despite the final score, the Senators (1-5-1) tested Canucks goalie Thatcher Demko early and often on Wednesday, outshooting Vancouver 24-7 in the first period alone.

“We were playing fast, we were playing off the forecheck, we were driving the net,” said Sens coach D.J. Smith. “And in the second period, we fell into a rush game. We turned pucks over and we fed their game and when they had opportunities, they put it in the back of the net.”

Demko had 42 saves on the night, and Marcus Hogberg stopped 30-of-35 shots for the Senators.

“The goals he gave up were blatant mistakes by us,” the coach said.

The entire Sens team needs to be better in front of its netminder, said centre Josh Norris, who scored Ottawa’s lone goal on power play in the first period Wednesday.

“We’ve let up 10-plus goals in two games. You’re not going to win games like that,” he said. “We’ve scored two goals in the last three games, too, so both those areas, obviously, are not good enough. And it has to improve.”

The Senators have now lost six games in a row. Ottawa has not had a victory since topping Toronto 5-3 to open the season back on Jan. 15.

“We’ve put together a period at a time, two periods at a time, but it seems like, for some reason, we just find one period to fall apart and mess everything up,” Norris said. “We’re young but that’s not an excuse. Just a lot of mistakes that are very preventable, I think.”

“Losing sucks. I hate losing, everyone in the room hates losing,” he said. “So we’ve just got to bear down a little bit extra. We’re going to get out of this eventually. We’ve just got to stick together, which we have been, and stay positive. But the focus is on a win tomorrow.”

Ottawa won’t have to wait long for a chance to avenge Wednesday’s loss. The two sides will battle again on Thursday, closing out a three-game series.