For Jessica Korda, the Diamond Resorts Tournament of Champions was all about her ability to just hang in there.

Trailing by three shots headed to the back nine at Four Seasons Golf and Sports Club Orlando on Sunday, she first caught Danielle Kang with a late four-birdie burst to shoot 5-under 66, then won with a curling 30-footer for birdie on the first playoff hole.

Kang shot 68. The leader after each of the first three rounds, she had a chance to extend the playoff, but missed her 18-foot birdie putt on the low side at the 185-yard 18th.

Smiths Falls, Ont. native Brooke Henderson finished in ninth place at 13-under par. She shot a 70 in her final round Sunday. 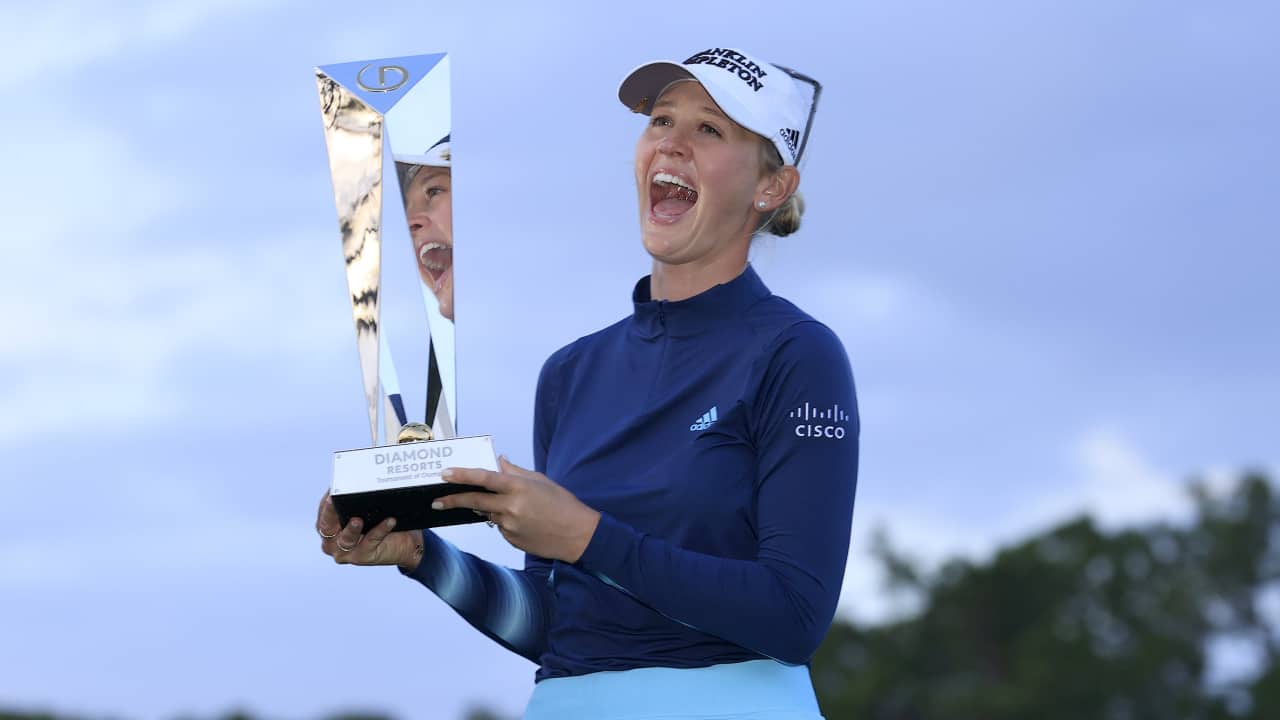 It was the sixth LPGA victory for the 27-year-old Korda, her last one coming nearly three years ago.

She and Kang finished at 24-under 260 to eclipse the previous tournament record by 10 shots. Korda, ranked 23rd in the world, also had to turn back her younger sister, Nelly Korda, 22, who at No. 4 in the world ranking was the top player in the elite winners-only field.

“I knew I was going to have to go low today,” said Jessica Korda. Half of her six victories have arrived at season-opening events. “It was a crazy day … A crazy two days. A crazy week!”

Nelly Korda started her round six shots back Sunday and shot a 64 —- which included a missed 3-footer for birdie at 16 —- that left her two shots out of the playoff.

Saturday, Jessica Korda became the sixth player in LPGA history to shoot 60 or better with her sparkling 11-under 60. A day later, she was slow to build any sort of momentum, playing her first 12 holes in 1 under. At one point early in the opening nine, Kang had a 7-foot putt to stretch her lead to five shots, and she was threatening to leave the field way behind.

‘Pedal to the medal’

Jessica Korda had owned the back nine all week (she would play it in 21-under par despite her three closing bogeys Friday). Trailing by two shots while standing on the par-5 13th tee, and relaxed as she chatted to three celebrity players on the tee, she knew she needed to be more aggressive —- especially because Kang had yet to make a single bogey all week.

“When you’re chasing, you need to keep the pedal to the metal,” Korda said, “and I wasn’t doing that.”

Kang went 68 holes in the tournament without a bogey (and 84 holes overall, dating to December’s CME Group Championship) her streak ending when she three-putted for bogey at the rugged 419-yard 15th.

She followed that with her loosest swing of the day, a driver flared right, into the trees and pine straw at the drivable par-4 16th. She did well to scramble for par. Jessica Korda, meanwhile, made an easy birdie after hitting a drive onto the front apron, and with two holes to play, the pair were tied at 23 under. Both birdied the par-5 17th.

Kang, also seeking her sixth LPGA victory, had spoken all week about not being able to prepare for the event as she normally would. That caught up to her down the stretch. Though she never tested positive for COVID-19, she twice was exposed, and took six tests before getting on a plane from Las Vegas to Orlando, landing late Monday night. Still, she’d played flawlessly. But when she needed to make clutch shots down the stretch, she discovered something was missing.

“‘I’m not disappointed in that I didn’t win,” Kang said. “It’s not about winning and losing for me. It’s about being able to execute when I want to —- and having a feeling when I feel like I can’t do something is something I don’t like.”