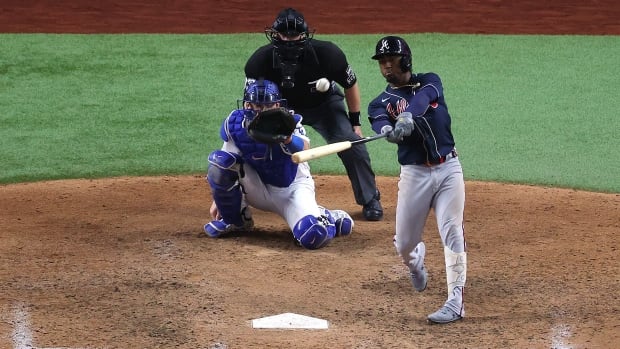 Ozzie Albies homered into the Atlanta bullpen in the ninth inning for the second straight night, and Mark Melancon once again grabbed the ball on the fly.

Atlanta had a five-run lead at the time. By the time the reliever to the mound, the lead was down to one. Melancon held on once again.

Freddie Freeman also homered for the second night in a row, and streaking Atlanta beat the Los Angeles Dodgers 8-7 Tuesday night to take a 2-0 lead in the National League Championship Series.

Atlanta became just the fourth team in major league history to begin a post-season 7-0 on a night made more remarkable by Melancon’s bullpen grab.

Atlanta led 7-0 in the seventh but the lead had dwindled to 8-6 when Melancon replaced Josh Tomlin with two outs in the bottom of the ninth after Corey Seager’s RBI double and Max Muncy’s two-run homer.

Albies extended the game with a fielding error on Will Smith’s grounder to second before, and reigning NL MVP Cody Bellinger hit an RBI triple. Melancon induced AJ Pollock to ground out to third, ending the 4-hour, 12-minute game.

“I didn’t feel good with a big lead because these guys are too powerful, and that’s a good ballgame to win. They all are now,” manager Brian Snitker said. “We kind of shot ourselves in the foot there at the end. Melancon did a great job coming in.”

Rookie Ian Anderson extended his post-season scoreless streak in an abbreviated start as Atlanta moved within two wins of their first World Series appearance since 1999. All previous 14 teams to win the first two games of a best-of-seven NLCS went on to claim the pennant.

“They’re not going to give up. We have to treat tomorrow like the first game of the series and come out strong,” Melancon said. “There’s no reason for either club to take their foot off the gas. … Nobody has won anything yet.”

Freeman put NL East champion Atlanta ahead to stay with a two-run homer in the fourth off rookie Tony Gonsolin, who filled in after three-time NL Cy Young Award winner Clayton Kershaw was scratched because of back spasms. Freeman added an RBI single as part of a four-run outburst an inning later.

Game 3 is Wednesday night, when 24-year-old playoff veteran Julio Urias starts for the Dodgers, seeking to win their third pennant in four seasons. Kyle Wright, another rookie right-hander, is on the mound for Atlanta, who have outscored opponents 37-12 in the playoffs.

Anderson allowed one hit and struck out five, but walked five while throwing 85 pitches in four innings. The 22-year-old right-hander didn’t come out for the fifth Atlanta batted around in the top of the frame and built a 6-0 lead while tying a LCS record with four walks in the inning.

Los Angeles, which had the best record in the pandemic-shortened season, trailed by seven until Seager’s three-run homer to greet A.J. Minter in the seventh.

Only seven weeks after his big league debut with Atlanta, Anderson has pitched 15 2/3 scoreless innings and is only the second pitcher in major league history to start his post-season career not allowing a run in three consecutive starts of at least four innings. The other was Hall of Fame right-hander Christy Mathewson, who threw three shutouts in the 1905 World Series for the New York Giants.

When Kershaw was scratched in favour of a likely start later in the series, it set up the second matchup of rookie starting pitchers in a LCS.

Gonsolin’s post-season debut came 17 days after his prior game. The right-hander struck out seven and allowed only three hits, but gave up five runs and walked three in 4 1/3 innings.

Freeman hit a ball more than 400 feet into the right-field seats, similar to his solo shot in Game 1, after Ronald Acuna Jr. walked leading off the fourth.

Gonsolin was done when Acuna walked again in the fifth, right after an RBI double by rookie Cristian Pache, in the lineup after Adam Duvall was removed from Atlanta’s NLCS roster because of a left oblique injury sustained in the series opener.

Pedro Baez then walked two of his four batters, including Travis d’Arnaud with the bases loaded before Albies’ sacrifice fly on which Bellinger made an impressive leaping catch on the run in centre.

Jose Altuve was the AL MVP in 2017 when his Houston Astros sometimes knew exactly what pitches were coming.

Now, he doesn’t even know where his own throws are going.

Altuve committed his fourth throwing error this post-season and third of the AL Championship Series on Tuesday night in the sixth inning of the Tampa Bay Rays’ 5-2 victory over Houston in Game 3.

The normally reliable second baseman has an undeniable case of the yips, and it has hurt the Astros badly while the defending AL champions slip to an 0-3 series deficit and the brink of their first series sweep since the 2005 World Series.

Altuve also made two throwing errors in Game 2 of the ALCS, contributing significantly to the Astros’ 4-2 loss. His three errors in the last two games led to five runs while prolonging rallies that

The six-time All-Star homered in the first inning of Game 3, but his subsequent error cleared the way for a five-run rally by the Rays, who took a 5-1 lead in the game in their quest for a 3-0 series lead.

With a runner on first, Altuve fielded Brandon Lowe’s grounder and botched a routine toss to second base on an attempted forceout of Randy Arozarena. Altuve bounced his throw past shortstop Carlos Correa into left field with a noticeably unnatural throwing motion, ruining any chance at a double play.

The Astros then removed starter Jose Urquidy, who had been pitching well before the error. During the pitching change, Altuve stood by himself at second with his hat off while the other three Houston infielders went to the mound. Afterward, they went over to Altuve, giving him encouragement and support.

But the Rays promptly capitalized against reliever Enoli Paredes with back-to-back singles to take the lead. Joey Wendle’s two-run single with the bases loaded put Tampa Bay up 2-1, and pinch-hitter Hunter Renfroe’s two-run double made it 5-1 before the inning finally ended with 11 Rays coming to the plate.

Altuve’s errors contrast sharply with the near-flawless defence being played by the Rays, who have made a handful of sparkling defensive plays in each game of the ALCS.

Altuve’s problems also loomed large over Game 2, in which he bounced two throws to first from shallow right field while playing in a defensive shift. After the second error, Correa took Altuve’s normal spot in the Astros’ shift, and he retained the spot in Game 3.

“You just hope he isn’t getting the yips, because invariably they come in bunches,” said Houston manager Dusty Baker, who gave Altuve a hug in the dugout after the third inning Monday. “Everything comes in bunches. I just told him to flush it. This guy has been awesome for us. You’ve got to flush it and move on, or else it multiplies. I’m sure he’ll do that.”

Altuve also made a throwing error in Game 2 of the first-round series against Minnesota. He committed only four errors during the regular season for Houston, which led the majors with a .991 fielding percentage.

He committed just two errors in his first 47 career post-season games before this year. The 5-foot-6 Venezuelan dynamo is generally considered a solid fielder at second, winning a Gold Glove in 2015.

Altuve won the AL batting title in 2017, when Houston beat the Los Angeles Dodgers in the World Series for its first championship.

Last off-season, an investigation by Major League Baseball determined the Astros stole signs illegally in 2017 and 2018 using a camera in centre field.

Altuve is still contributing at the plate for Houston. His first-inning solo homer off Ryan Yarbrough was his fourth of this post-season and the 17th of his playoff career, and his six career homers in the ALCS are the most in major league history.

Like it or not, NHL could be forced to play next season in modified bubble