Frederick P. Fromm donated $131 to Sloan in August 2020 while the MP was running for the leadership of the Conservative Party, according to Elections Canada records. That’s the full name of Paul Fromm, who is widely regarded as a white supremacist although he has rejected the label of “neo-Nazi.”

The donation was first reported by PressProgress, a non-profit news website funded by the left-leaning Broadbent Institute.

“Derek Sloan’s acceptance of a donation from a well-known white supremacist is far worse than a gross error of judgment or failure of due diligence,” O’Toole said in a statement issued Monday evening.

“In accordance with the Reform Act, I have initiated the process to remove Mr. Sloan from the Conservative Party of Canada caucus. I expect this to be done as quickly as possible. Moreover, as leader of Canada’s Conservatives, I will not allow Mr. Sloan to run as a candidate for our party.”

Racism has no place in the Conservative Party of Canada. My statement: pic.twitter.com/TP6uATWOi3

Fromm, who founded the Canadian Association for Free Expression and Citizens for Foreign Aid Reform, has appeared at far-right protests, has spoken regularly on the white nationalist radio show Stormfront and is the subject of a Hamilton police investigation into claims that he shared the New Zealand mosque shooter’s manifesto on his organization’s website.

Fromm confirmed in an email to CBC News that he made the donation.

“Erin O’Toole[‘s] bluster and outrage give the lie to his promise to build an ‘inclusive’ party,” Fromm wrote.

Sloan, a social conservative who placed last out of four candidates in the leadership race, said he had been unaware of the donation’s source.

In a statement posted to Twitter, he pointed out that his campaign received $1.3 million in over 13,000 separate donations.

“Paul Fromm is a notorious name to some, but not to everyone, and clearly this name, mixed as it was in the midst of thousands of other donations, did not ring any bells to my team,” Sloan said.

“Upon learning about what happened, I immediately contacted the Executive Director of the Conservative Party, Janet Dorey, and requested this donation be returned.”

In a subsequent statement and Facebook Live video, Sloan said the Conservative Party accepted a 10 per cent cut of Fromm’s donation. He also said that Fromm was accepted as a member of the party last summer, was mailed a ballot and voted in the party’s leadership race — all without raising any red flags.

“They are trying to kick me out of the party for not having some excessive standard of scrutiny that they don’t even have themselves,” Sloan said in the video. “I am not going to go down without a fight.”

Fromm said in an email that he was a member of the party and that he voted for Sloan in the leadership race.

O’Toole’s office declined to comment on those allegations, while a spokesperson for the party said its previous statement stands.

News of Fromm’s donation came a day after O’Toole released a lengthy statement saying there is “no place for the far right” in the party and pushing back at Liberal attempts to link his party to Trump-style politics.

In his statement, O’Toole asserted his own views on such issues as abortion, gay rights and reconciliation with Indigenous people in Canada, while insisting that his party is not beholden to right-wing extremists and hatemongers.

A vote to expel Sloan could come as early as this week;  the Tories are holding a virtual caucus retreat on Thursday and Friday ahead of the return of Parliament on Jan. 25. Under the Reform Act, passed in 2014, an MP can only be removed from caucus through a majority vote of all caucus members.

Sloan sits in the Conservative caucus as MP for the Eastern Ontario riding of Hastings—Lennox and Addington. Some Conservative MPs reportedly pushed for Sloan’s ouster in May after he publicly questioned whether Canada’s chief public health officer, Dr. Theresa Tam — who was born in Hong Kong — was working for China.

Ultimately, a backbencher put forward a motion calling on him to retract his comments. Sloan insisted that his question had been “rhetorical.”

Sloan also has attracted controversy for his claim that the cause of sexual orientation is “scientifically unclear” and for saying that the Liberal government’s legislation to ban conversion therapy — the discredited practice of trying to change someone’s sexual orientation with counselling — was tantamount to legalized “child abuse.”

A number of Conservative MPs swiftly indicated their approval of O’Toole’s decision on social media. Eric Duncan, a fellow Eastern Ontario MP who is the first openly gay Conservative MP, was one of them.

“I have had enough too. There is no room for this garbage in our Party. Good riddance,” Duncan tweeted. 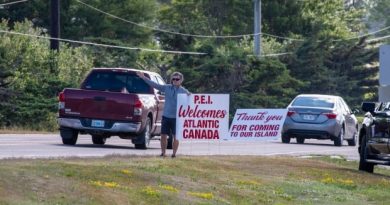