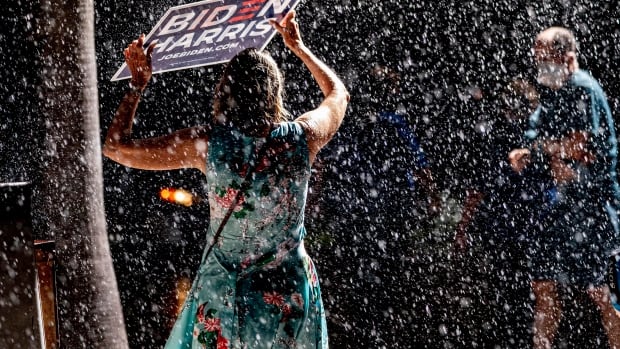 Florida’s state motto is “In God We Trust,” which also happens to be the motto of the United States. But for Deborah Tamargo of the Florida Federation of Republican Women, the trust is not only in el dios but in something just as big.

Tamargo is one of a record number of Hispanics registered to vote in the state. She said she’s working flat-out for Donald Trump ahead of Tuesday’s vote because she believes Republicans stand up for liberty.

“It’s a very important vote, particularly for those of us whose families were forced to leave their countries of origin because of socialism, communism, tyranny, dictatorships, poverty,” she said in an interview with CBC’s The House from Tampa (the current home of the Stanley Cup, as she made a point of reminding a Canadian audience).

Earlier this week, Tamargo spent part of her day door-knocking and part of it waving a Trump sign at passing motorists. She said the response she’s getting now is different from what she saw four years ago, when Trump narrowly won Florida on his way to the White House.

“I did all of those things back in 2016, but the amount of horns beeping and people taking our pictures with their cellular phones … it was just amazing. And the thumbs-up, it was incredible. I mean, the honking just never stopped.”

The biggest prize among swing states

Florida is not the only battleground state in this election — but it is the biggest prize, with its history of backing the winner in all but two presidential elections since 1924 and its record of producing very, very close contests.

It’s why Trump and his Democratic opponent, Joe Biden, made a final swing through the state on Thursday, looking to win over undecided voters and get their committed supporters out.

“The polls have been statistically tied for months,” said Susan MacManus, professor emerita of political science at the University of South Florida in Tampa. She spoke to CBC News as part of special report on Florida on this week’s edition of The House.

“And the fact that they’re spending a little bit of their time this close to an election tells you that both campaigns see it as critical. And that’s not unusual because Florida, once again, is the biggest swing state, with 29 Electoral College votes up for grabs.”

While many older Cuban-Americans are solidly Republican, the Hispanic community, like the state itself, is deeply divided. That’s especially true in Tampa and surrounding Hillsborough County, which voted narrowly for the Democrats four years ago.

“One thing you have to be crystal clear on … is Hispanics are not monolithic,” said Victor DiMaio, who heads the county’s Democratic Hispanic Caucus.

The ‘Highway to Heaven’

That’s particularly true along Interstate 4, known to political pundits and organizers as the I-4 corridor. It runs across the state from Daytona Beach in the east through Orlando to Tampa on the west coast of the state.

Most of Florida’s 67 counties are solidly Republican. The Democrats won only nine of them in 2016, racking up huge numbers in Miami, Tampa and Orlando.

It’s the voters in the counties along the I-4 corridor who put the swing into this swing state. MacManus said support for the two parties is evenly divided in Florida.

“And that’s why the I-4 corridor again, as in the past, is described as the politico’s Highway to Heaven if you win, and hell if you don’t,” she said. “So it still has a very important place in Florida’s politics.”

It’s the one constant in a state that continues to change rapidly. MacManus said younger voters, aged 18 to 39, make up nearly a third of all registered voters in Florida.

Many have declared no party affiliation, but they could still be a significant factor on Tuesday if they turn out in force over issues like climate change, racial injustice and gun control.

“Those have been issues that [have] seen a lot of involvement of young people … whether it’s marches or, you know, networks of activists raising money or protesting,” she said. “And it may be that the issue activism might actually, for once in a long time, translate into electoral activism. We’re watching it very closely.”

Ted Deutch is a six-term Democratic congressman running for reelection in Florida’s 22nd district, which includes Fort Lauderdale. His district is home to Stoneman-Douglas High School, where a former student shot and killed 17 people in February, 2018.

“I’ve seen these families take their grief and turn it into action, honouring the memory of their loved ones by working hard to make schools safe and to address the gun violence epidemic in our country,” he said.

Deutch said it’s one of the reasons he’s confident Biden can win Florida this year — which would be a good omen for Democrats in a state with a tradtion of backing the winning presidential candidate.

But in this most unusual year — with record turnout for advance polls and mail-in balloting, the pandemic notwithstanding — Florida could play another pivotal role.

The state has a longer history than most with mail-in balloting, and counts the ballots as they arrive rather than waiting until all the votes are in on election day. That means it could be one of the few states able to report a final outcome next week.