One of the top infectious disease experts in the world says despite early successes in the pandemic, Canada faces a worsening situation until a COVID-19 vaccine is rolled out widely and needs to “double down” on public health measures.

“Right now, the entire planet is in trouble. If you look at almost every country, there are very few exceptions,” said Dr. Anthony Fauci, the director of the U.S. National Institute for Allergy and Infectious Diseases (NIAID), in a wide-ranging interview with CBC News.

“The European Union, if you look at the number of new infections, it’s out of sight. The United States is out of sight. Canada, which was supposedly doing so well, is also getting into trouble. There’s a lot of community spread.”

Fauci says the virus is primarily spreading at the “household level” among smaller groups of people who may not even know they’re infected — something to be vigilant about as the holidays and colder months approach.

“We’ve got to be able to test widely in the community for asymptomatic spreaders of the infection,” he said by phone from Washington, D.C.

“If you just test people who are symptomatic, you’re going to miss a very large contingent of the spread of infection in the community.”

Vaccines on the horizon but a ‘long way to go’

Fauci, who has advised six U.S. presidents and has run the NIAID for almost four decades, said he was “surprised” by Pfizer and Moderna’s early vaccine trial results, which showed over 90 per cent effectiveness, but said it’s not yet “time to celebrate.”

“I would have been extremely happy if this were a 75 per cent effective vaccine. I had an aspiration that it would be higher than that … but quite frankly, I did not expect it,” he said.

“It’s extraordinary to have two vaccines using a novel platform that had never before been used in an approved vaccine to have an efficacy so high.”

Both are mRNA vaccines that use a new technology to target the spike protein of the coronavirus, meaning no vaccines of this type have ever been approved for widespread human use.

While it’s still not known if the vaccines will provide long-lasting immunity to COVID-19, Fauci said, the fact that the Moderna vaccine also prevented severe disease in participants in the Phase 3 trial was “strikingly impressive.” 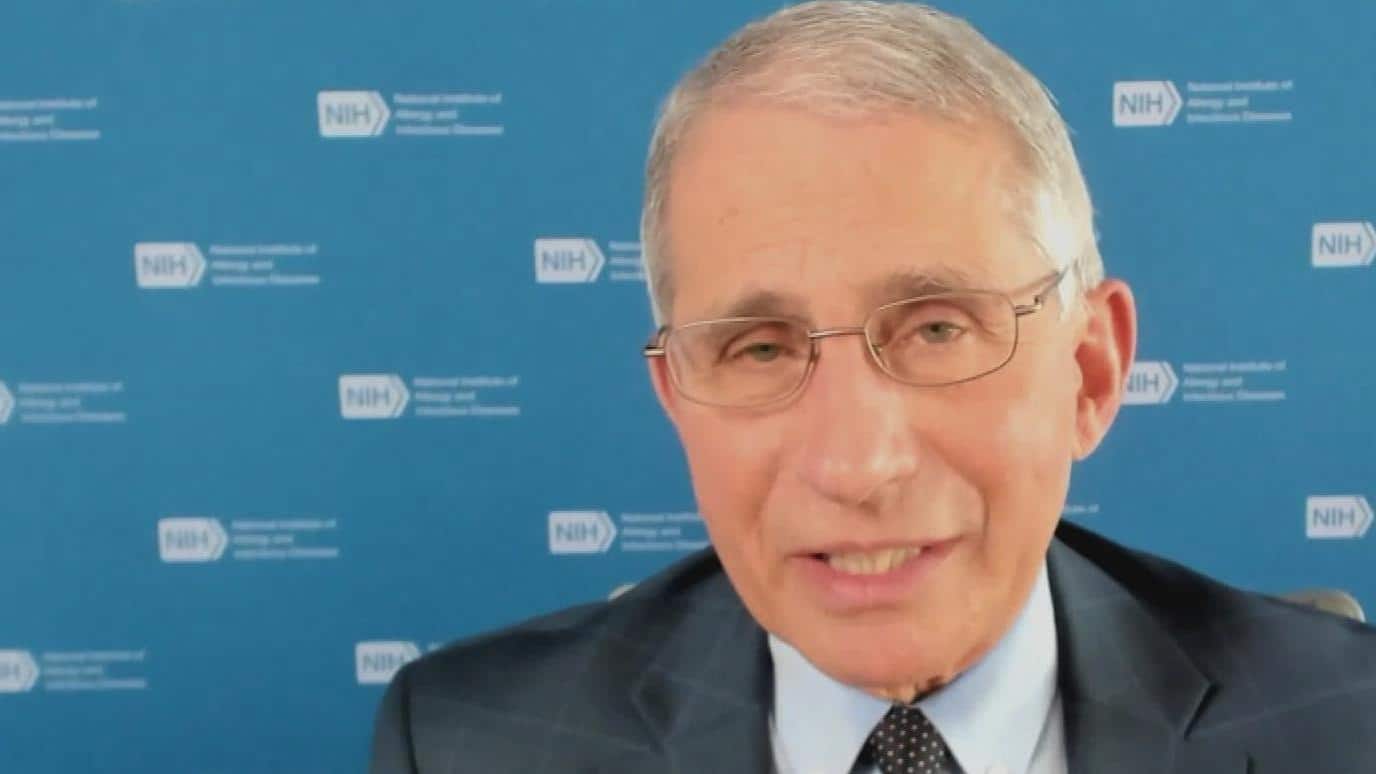 Infectious disease expert Dr. Anthony Fauci is telling Americans to see encouraging news about COVID-19 vaccines as motivation to be patient and follow basic public health advice, such as wearing a mask. 1:26

“The next thing to do is to get the vaccine approved by the [U.S. Food and Drug Administration] and get it out to the people who need it the most,” he said, which would include front-line health-care staff, essential workers and those with underlying medical conditions.

“There will be a distribution of vaccines that hopefully would start by the end of December, and then go into January, February, March, April, getting the higher-priority people vaccinated first, and then the general population.”

Fauci said he’s hopeful that people with no underlying medical conditions would be vaccinated against COVID-19 by mid-2021 but stressed that countries cannot “abandon public health measures” until then.

“That would be a disaster,” he said. “I see the vaccine as ‘help is on the way,’ and it’s the light at the end of the tunnel — but we still have a long way to go.”

Fauci said it’s not enough to have a safe and effective COVID-19 vaccine, because you also need to convince the “overwhelming majority” of the population to take it, which could be a challenge — especially in the U.S.

“There’s a lot of anti-science, anti-vaccine skepticism in the country by people who are not convinced that they want to get vaccinated,” he said.

“Hopefully, the degrees of efficacy will be an incentive for people who might have been on the fence about getting vaccinated to actually get vaccinated.”

Fauci said despite the “major advance” in developing two highly effective vaccines in such a short period of time, people should not “put down their guard” in the coming months.

“I would hope that it would be an incentive to double down even more with the classical and simple public health measures,” he said, referring to wearing a mask, avoiding crowds, keeping physical distance, increasing ventilation and washing hands frequently.

“Those are very simple things that can go a long way in blunting the surges that we’re seeing right now.”

Fauci said politicians and public health officials at local levels may also need to step in to impose strict measures to control the virus, because a national lockdown mandate wouldn’t work in countries like the U.S.

“There’s no appetite in the United States. We certainly are not going to have a central lockdown at the federal level, for sure — the president has said that’s not going to happen,” Fauci said.

“But what likely will happen and might be helpful is at the state and local level, where governors and mayors and community leaders lock down in a surgical way.”

Fauci said authorities can target settings where the virus is likely to spread by imposing limits on the number of people gathering and shutting down high-risk businesses if necessary.

Fauci said that while many people are experiencing “COVID fatigue” from a pandemic that has lasted the better part of a year, it’s important to focus on driving down transmission as we enter the winter months.

“I think we can combat that by trying to convince [people] that there is light at the end of the tunnel if they hang on a bit longer — [if we] double down on these public health measures, then we might actually have a situation where we’ll have such control over the outbreak,” he said.

“The only way to get out of this and to get the economy back and to get back to normal is to essentially put an end to the outbreak aspect of this — to get it so low in the community that it’s not a big risk.”