The COVID-19 pandemic set another record-high number of new cases in Ontario on Sunday, with areas in and around Toronto hit the hardest.

The province reported 1,924 more cases of the respiratory illness and 15 more deaths. The latest tally exceeds Saturday’s record of 1,859 cases.

Locally, there were 568 new cases in Toronto, 477 in Peel Region and 249 in York Region, Ontario Health Minister Christine Elliot tweeted on Sunday.

Ontario, Alberta and Quebec all saw their highest 24-hour spikes in cases the previous day — and across Canada, new cases totalled more than 6,300, with 93 more deaths.

There is still a “long road ahead” in the battle to contain the virus, Canada’s chief public health officer, Dr. Theresa Tam, said in her daily update on Saturday, but she added that an initial vaccine supply is expected to be available to Canadians early next year. 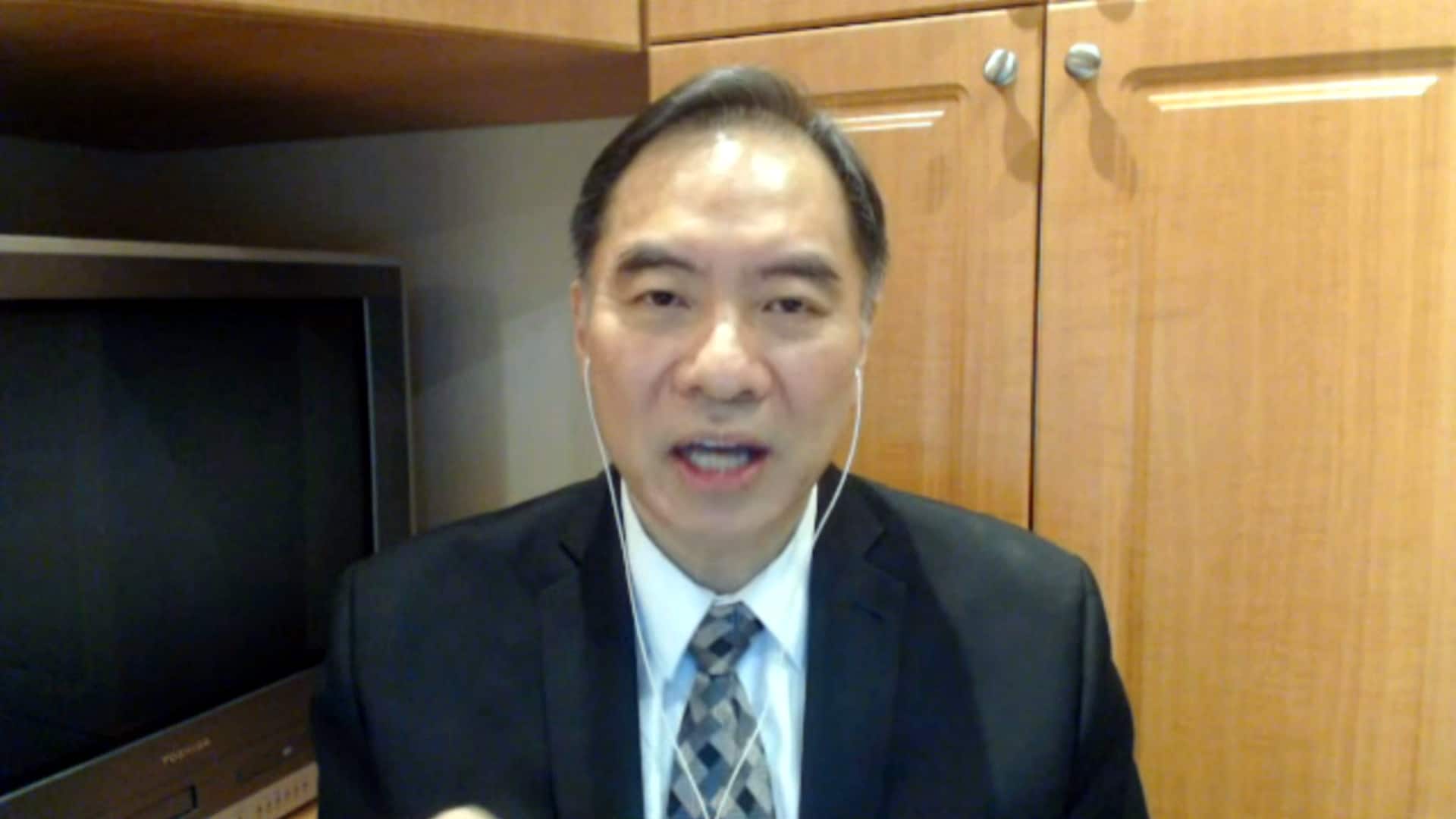 “There is some good news on the horizon,” she said. “An initial supply of vaccines is expected to become available in early 2021, and although supply will be limited at the outset, Canada is well positioned to provide access to safe and effective COVID-19 vaccines for all Canadians.

“We don’t have a COVID-19 vaccine just yet and we must be prepared to address a range of logistical and operational challenges,” Tam said.

“Canada must continue with the collective effort of individuals and public health authorities to sustain the response, while balancing the health, social and economic consequences.”

Procurement Minister Anita Anand said this week that information will be shared with Canadians once it’s certain, but that dates will depend on when Health Canada approves the vaccine and other factors such as shipment and storage necessities.

In British Columbia, the Vancouver Canucks parted ways with their longtime national anthem singer, Mark Donnelly, in response to reports he planned to sing at a rally organized by COVID-19 deniers and anti-mask advocates. Donnelly sang the anthem at an event called the Christmas Freedom Rally in Vancouver on Saturday, where hundreds of people protested restrictions imposed by B.C.’s provincial health officer.

Alberta reported a record 1,879 new cases on Saturday. The province also said 563 people are being treated in hospital, including 101 in ICU.

Meanwhile, Premier Jason Kenney said tougher restrictions will likely be aimed at Calgary and Edmonton, just hours after Dr. Deena Hinshaw, the province’s chief medical officer of health, reported a concerning rise in rates in rural areas. She stressed that even one case can move like wildfire, and COVID-19 doesn’t respect geographical boundaries. 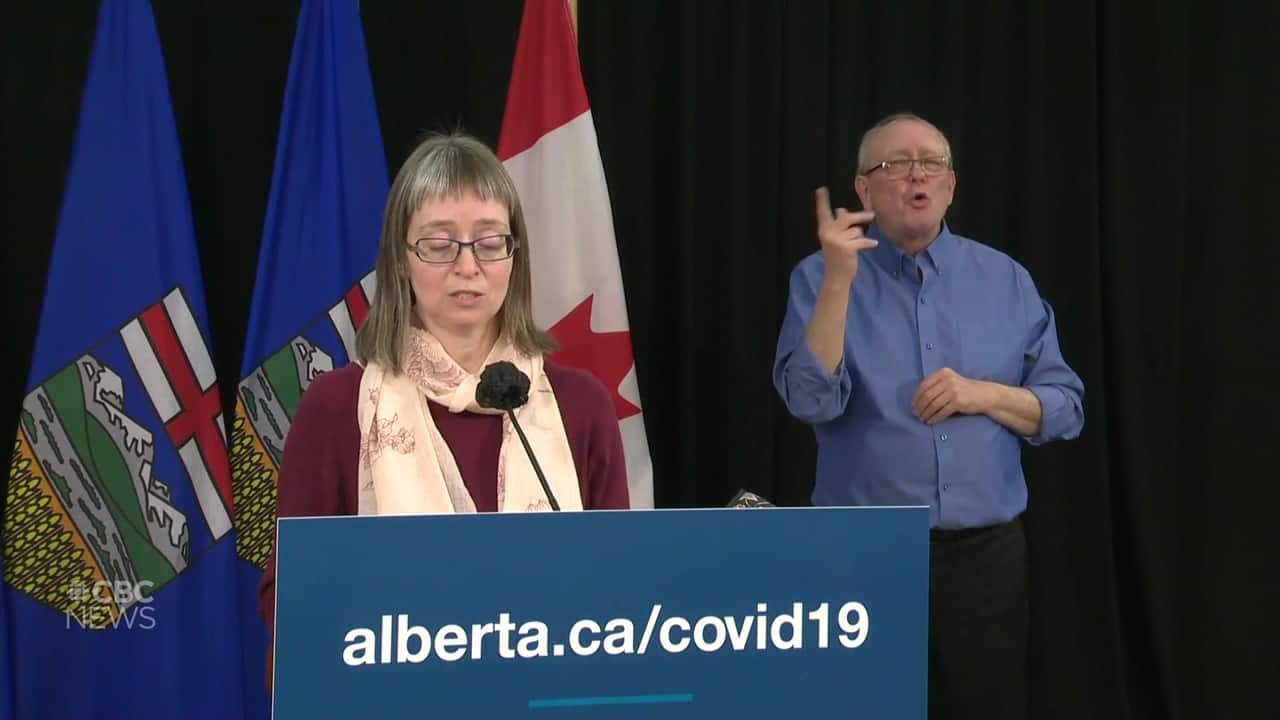 Dr. Deena Hinshaw pleaded with Albertans in rural areas to wear masks and follow public health orders, warning them that their distance from ICUs will make COVID-19 “even more daunting.” 1:31

Saskatchewan reported 202 new COVID-19 cases on Saturday. Nearly 4,200 cases are considered active, 116 of which are in hospital and 25 of which are receiving intensive care. Provincial officials haven’t reported any new virus-related deaths on Saturday, leaving that total at 55.

Manitoba said a record 19 more people have died of COVID-19. The province also announced 354 new cases and said there are now 349 people in hospital, including 51 in intensive care.

Also on Saturday, a court ruled that a Winnipeg church will not be exempt from public health orders and is not permitted to hold drive-in worship services. Springs Church and two of its pastors have been fined more than $32,000 for allowing the services, which are banned under Manitoba’s current public health order aimed at curbing the spread of COVID-19.

In northern Manitoba, the Canadian Armed Forces says it will be on hand to support the Shamattawa First Nation as cases skyrocket in the community.

In the North, Nunavut reported eight new cases — all in the hard-hit community of Arviat. The territory has recorded a total of 214 cases, of which 158 have recovered, and no deaths so far.

As of Sunday, there were more than 66.7 million reported cases of COVID-19 worldwide, with more than 42.9 million of those listed as recovered or resolved, according to a tracking tool maintained by U.S.-based Johns Hopkins University. The global death toll stood at more than 1.5 million.

In Europe, Britain‘s rollout of the Pfizer/BioNTech COVID-19 vaccine is set to begin on Tuesday. The vaccine will initially be made available at 50 hospitals in England for people aged 80 and over, as well as for long-term care and hospital workers.

Russia reported a record high of 29,039 new COVID-19 cases on Sunday, taking the national total to 2,460,770 since the pandemic began. Authorities confirmed 457 deaths related to COVID-19 in the past 24 hours, pushing the official national death toll to 43,141.

In the United Sates, North Carolina reported a record increase in cases of the novel coronavirus and hospitalizations on Saturday. The state reported 6,018 cases since Friday and 2,171 people with the respiratory illness in hospitals.

“In less than a week, we went from exceeding 5,000 new cases reported in one day to exceeding 6,000,” said Dr. Mandy Cohen, the state’s health secretary. “This is very worrisome. This indicates we have even more viral spread across our state right now.”

The state’s Department of Health Services said on Twitter that people should wear masks “around anyone who isn’t a member of your household, even those you know and trust.”

The U.S. continues to struggle with the world’s highest rate of COVID-19 infection. With more than 14 million total cases, the virus became the leading cause of death across the country in the past week.

President Joko Widodo said in a televised address that another 1.8 million doses of the vaccine are expected to arrive in
early January. The government is still waiting for millions of other doses of the Sinovac vaccine to arrive in the form of raw materials that will be further processed by state-owned pharmaceutical holding company PT Bio Farma. 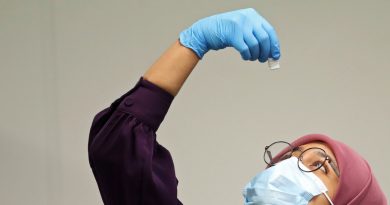 In Crises, Vaccines Can Be Stretched, but Not Easily

Video ads urge Albertans not to invite Mr. COVID home for the holidays