Coronavirus infection numbers hit an all-time record Friday, with nearly 24,000 new daily cases recorded — and so did the number of patients in the country’s intensive care units. Official data from the German Interdisciplinary Association for Intensive and Emergency Medicine (DIVI) show that the number of Covid-19 patients in German intensive care units (ICU) has climbed from 267 on September 21 to 3,615 as of November 20 — a more than 13-fold increase in the space of just two months.
Europe’s largest economy has gotten through the pandemic fairly well for now compared to its neighboring countries. This in in part due to its high intensive care capacity with 33.9 beds per 100,000 inhabitants; in contrast, Italy has just 8.6. But with Covid cases across the region skyrocketing, even Germany’s healthcare system is under strain and hospitals in some areas are increasingly coming close to their limits.

Germany’s leadership on Friday warned the system could collapse in weeks if the current trajectory continues. “The number of severe cases in intensive patients is still rising. The number of deaths is something that is not really being talked about and it remains very high,” said Steffen Seibert, spokesman for Chancellor Angela Merkel.

“We have not yet managed to bring the numbers back to a low level. We have basically only managed to get past the first step so far, that is, to stop the strong, steep, exponential increase of infections and we are now stable, but our numbers are still very, very high.”

Michael Oppert, head of intensive care at the Ernst von Bergmann hospital in Potsdam, just outside Berlin, is equally concerned about the dramatic rise in recent weeks — and expects things to get worse.

“We are not at the tip of the wave now, at least as far as I see,” he told a visiting CNN team this week. “And we do have a capacity for a few more patients, but if this carries on at the speed that we are experiencing right now I would imagine that even our hospital, with over 1,000 beds, will come to a point where we have to send patients home or to other hospitals to get treated.”

Bettina Schade, chief nurse on the Covid ward in the same hospital, described how the ward has changed over the last few weeks. “The numbers of patients have been increasing. We are getting a lot more patients with varying degrees of illness. Both for the normal Covid ward, but many also come to the emergency unit and very quickly have to be put into ICU,” she said. “We are currently experiencing having to put a lot of patients from the normal Covid ward into ICU very quickly because patients deteriorate very quickly.”

This applies even to many younger patients with severe symptoms, said Tillman Schumacher, a senior infectious disease physician. “We have patients of 30 or 40 years here who are on a ventilator and I am not sure if they’ll survive.”

Only two of the 16 ICU beds were vacant and the hospital staff was already canceling non-urgent operations to free up capacity — as well as making plans to convert more of its general intensive care facilities into Covid units.

Dr. Uwe Janssens, head of the DIVI, explained what measures would be taken if the current spike continues. “The regular program of hospitals has to be shut down, a partial closing down of the regular operations and admissions of patients which you can delay for several weeks without any strain, they can be delayed. There are people who don’t need an emergency surgery or an emergency catheter or something like that. They can be delayed. And doing this you get the capacity and get the nurses and the physicians to help the ICU physicians and ICU nurses on their wards.”

After taking into account non-Covid patients, 22,066 intensive care beds in the country were occupied as of November 20, while 6,107 remained vacant. Germany has a reserve of about 12,000 ICU beds, including field hospital beds at Berlin’s convention center.

Despite the large capacity, health minister Jens Spahn earlier this month warned that ICUs could be overwhelmed if daily infection rates continued to rise at the current level. “We are now increasingly seeing a rising burden and the threat of being overwhelmed in intensive care, in hospitals and at GPs,” he said in an interview with Germany’s state broadcaster ARD.

And that could be bad news for all of Europe. Until now, Germany has been taking in Covid patients from neighboring countries whose health care systems are overwhelmed.

The German Foreign Office confirmed to CNN that during the first wave of the pandemic, between March 21 and April 12, 232 patients were transferred to Germany for treatment — 44 of them from Italy, 58 from the Netherlands and 130 from France. In the fall too, the federal states of North-Rhine Westphalia and Saarland offered spaces to 36 patients — three of them from the Netherlands, 25 from Belgium and eight from France, a Foreign Office spokesperson said.

”These patients have a need for intensive medical care,” said Anja Wengenroth, a spokeswoman at University Hospital Muenster in Muenster, North Rhine-Westphalia. Her hospital established a system in the spring whereby Benelux countries — Belgium, the Netherlands and Luxembourg — could put in a request for ICU beds, a scheme which is ongoing. The North Rhine-Westphalia Ministry of Labor, Health and Social Affairs confirmed to CNN that currently ”46 hospitals have currently agreed to accept foreign Covid-19 patients. There are currently 76 beds on offer.”

Anne Funk, head of the division of cross-border cooperation in Germany’s smallest federal state of Saarland, which borders France, told CNN that during the first wave of the pandemic, its hospitals took in 32 French patients. At the end of October, Saarland offered France eight beds; three patients have been transferred to date.

“We would like to help wherever we can,” Funk said. “We do not want to differentiate between nationalities. At the moment we still have capacities. We are coordinating with medical and local authorities in France on an individual needs basis. We are here to help.”

For now they can continue to do that, but with Germany’s ICUs filling up quickly, it’s not clear for how much longer.

Germany has recently seen a string of demonstrations against the country’s anti-pandemic measures, with many protesters denying the severity of the virus.

The country is in a nationwide partial lockdown which requires restaurant and bars to remain closed, people to avoid travel, keep their contacts to an absolute minimum and limit public meetings to members of two different households. Schools and shops have remained open. German federal and state leaders will meet next week to decide on introducing further measures.

On Wednesday, thousands of people gathered near the parliament in Berlin while lawmakers inside debated plans for greater legal powers to enforce restrictions. Police used water cannon and tear gas to disperse protesters, many of whom were not wearing face masks.

This is considered a slap in the face by frontline medical staff working hard to keep people alive, like Schade. “I also hear some people I know say things like: it’s like a flu or can be compared to a regular flu,” the chief nurse said. “We just cannot understand people saying that! Of course we all have the fear that maybe at some point we won’t make it anymore and could have a situation like they had in Italy where patients are outside in cars and get treated with oxygen because there’s no more capacity.”

Germany is still far away from such scenarios but, while there are still thousands of ICU beds available in the country, Oppert had a message of warning about the second wave of the pandemic and its dynamic.

“It is different, it is harder,” he said. “We do tend to see more patients now. Not only here in the Berlin/Potsdam region, in which we have a heavy burden of intensive care patients, but nationwide the numbers are climbing and they’re still climbing, they are not coming down at the moment.” 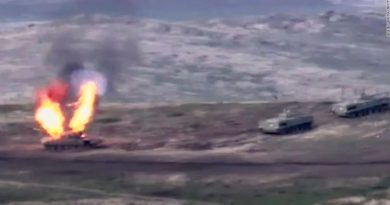 Why Putin, Xi, Bolsonaro and Erdogan haven’t congratulated Biden yet