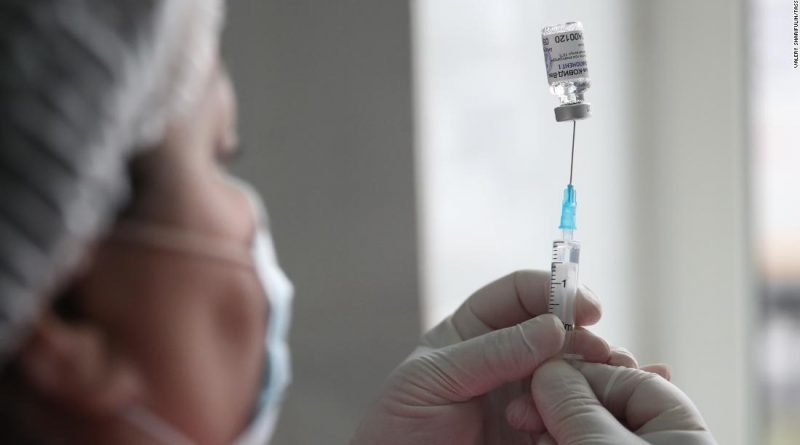 Since then, only 15,000 people have been vaccinated, according to Moscow Mayor Sergei Sobyanin. It means that on average, each clinic inoculated about 15 people a day, a fraction of the at least 271,000 people from priority groups vaccinated in the US in the first week.

Online sign-up forms for nine Moscow clinics reviewed by CNN showed plenty of free slots — even when signing up to get the shot the next day. In two clinics visited by CNN last week, there was no queue for the vaccine, and both institutions had only filled one slot, with five people showing up by midday.

One vial of Sputnik V contains five doses and takes half an hour to defrost, according to the vaccine’s instruction. After that, it can’t be put back in the freezer and must be discarded if not used, so clinics aim to administer the vaccine to a group of five at a time, according to packaging instructions.

“When I was getting my shot, only two out five people who signed up [for that time slot] showed up,” Moscow-based journalist Nikita Sologub tweeted. “The other three defrosted vaccines had to be thrown out.”

Sputnik V’s first shots in Moscow were primarily allocated for healthcare workers and teachers, but that list quickly expanded to cover other groups, including journalists and transportation workers.

Reports from local independent media also suggest that virtually anyone could sign up to get the vaccine if they fit the health criteria, as paperwork checks for eligibility have apparently been lax.

At this stage, Russia is primarily vaccinating people ages 18-60 without chronic health conditions. Last week, Russian Health Minister Mikhail Murashko announced that all regions are “ready to accept [the vaccine] and vaccinate.”

Empty waiting halls in Moscow clinics and wasted shots could be the symptoms of a larger issue Russia will have to face as the vaccination program expands nationwide: widespread mistrust in its vaccine.

Russia approved its first Covid-19 vaccine, Sputnik V, in August after testing it on several dozen people in a study with great fanfare from state TV.

The news of Sputnik V’s approval ahead of large-scale Phase 3 trials necessary to test the vaccine’s safety and efficacy drew considerable criticism from scientific and medical circles who worried that Russia was short-cutting an established process for political and PR gain.

Sputnik V showed more than 90% efficacy in trials, according to its makers at the Gamaleya National Center of Epidemiology and Biology. But the data they provided has been questioned as well, with some critics saying it may have been rushed out in an effort to keep up with announcements from other vaccine producers who were further ahead in Phase 3 trials, such as the Pfizer/BioNTech vaccine.

Russian President Vladimir Putin ordered his government to roll out large-scale vaccination on December 2, hours after the UK  authorized the Pfizer-BioNTech vaccine, signaling it will soon start inoculating en masse.

The name itself, Sputnik V, in honor of the first satellite launched by the Soviet Union, is reminiscent of the USSR’s early victory in the space race with the United States.

Vaccine skeptics pose a challenge to most governments looking to vaccinate the majority of their populations to get the coronavirus pandemic under control. In Russia, the very people who could persuade the general public to take the shot are hardly on board, with many health workers wary of the drug.

“At this stage, I’m not ready to get vaccinated, as the Russian vaccine is not transparent, and its effectiveness hasn’t been proven,” said Viktoria Alexandrova, a general practitioner in Saint Petersburg. “And all of that because of this absurd political race on who’s going to get the vaccine faster.

Most of the Russian doctors and nurses CNN spoke to said they have concerns regarding the rushed registration process for vaccine use and would like to see more data before getting the shot.

“I’ve recently recovered from Covid-19, so I still have antibodies,” said Natalya Romanenko, a nurse in the Chelyabinsk region. “None of my colleagues are planning on getting it now. I might get it later, but first we need to see how people manage with it.”

Scientists are still working to establish how much immunity antibodies to the virus might provide against reinfection. But Yulia Balovleva, a nurse in Saint Petersburg, said she is “ready to take any vaccine” if that helps bring the pandemic closer to an end.

A poll conducted in late October by the independent Levada Center found 59% of Russians ​polled do not want to get vaccinated if the vaccination was free and voluntary — a 4% increase from the same survey conducted in August.

Another poll made public by the ruling United Russia party in October found 73% of people polled were not planning to get vaccinated, Russian state-run news agency RIA Novosti reported. CNN has not independently reviewed that polling data, but United Russia’s acknowledgment of public skepticism was striking, given the government’s all-out push to promote the vaccine.

The Russian government’s patriotic messaging at all stages of the pandemic only fueled the already deep-rooted mistrust in the public health system, with skeptical Russians relying on word of mouth and social media posts to learn about the way the country is faring amid the pandemic. Vaccine trials were no exception, with volunteers taking to Facebook and Telegram to exchange data and advice.

“What’s wrong with the Russian coronavirus vaccine? Surprisingly, it’s Putin, the rest is more or less fine,” Leonid Volkov, opposition politician Alexey Navalny’s chief of staff, said in a YouTube video. “It has the worst PR campaign and the worst reputation among vaccines because of this insane race to grab the palm of victory.”

President Putin has repeatedly voiced support for Sputnik V, saying it has already proven its effectiveness.

“I think it’s necessary to [have mass vaccination],” Putin said during his annual press conference Thursday. “And I repeat that our vaccine is effective and safe, so I see no reason not to vaccinate.”

But the 68-year-old president has yet to take the vaccine himself. Speaking on Thursday, Putin confirmed that he had not been inoculated with Sputnik V yet, because it is not advised to people older than 60.

There are exceptions to this rule. The official Sputnik V Twitter account proudly announced that American film director Oliver Stone, who is 74 and is in Russia shooting a climate change documentary, has become “the first Oscar winner to get vaccinated with Sputnik V.”

Aside from criticism over the lack of transparency and data behind the vaccine’s safety and efficacy, some healthcare workers are concerned about what one ambulance worker ironically described to CNN as “voluntary-mandatory vaccination.”

Russia’s public sector workers, often referred to as “budzhetniki” or “budget workers,” as their salaries are paid from the state budget, often find themselves a tool in the government’s hands looking to bulk up participation in a project, be it elections or a pro-government demonstration.

According to internal documents, shared with CNN by an independent union called Alliance of Doctors, at least two hospitals in Moscow have ordered all of their staff to get vaccinated, with heads of departments obliged to hold “explanatory” talks with their teams about vaccine’s safety.

Moscow Health Department said in a statement that all vaccinations are done on a voluntary basis and the orders only meant to “create the most comfortable conditions for [vaccination], as well as [underscore] the need for explanatory work.”

In a country where the healthcare system is largely state-run and where the heads of state institutions carry tremendous authority, that kind of pressure is significant.

The stakes are high: Russia is nearing 3 million registered cases as its mortality figures spiral, breaking the records set during the spring outbreak. As of December 23, more than 52,000 people in Russia have officially died from Covid-19 since the beginning of the pandemic, with excess mortality data from official sources suggesting this number could be as much as three times higher.

To effectively vaccinate its population, Russia needs to inoculate 60%-70% of its roughly 146 million population, according to the country’s health minister. And to do that, it would not only have to win at the logistical challenges of delivering enough shots across its vast territory but also at turning around public opinion.