The day is cold and overcast but inside, standing in an empty and cavernous former Target department store, Ahmed Hussein is beaming. This is where the director of the The Neighbourhood Organization in Thorncliffe Park envisions a mass vaccination site where tens of thousands of residents in this east Toronto neighbourhood could be vaccinated.

This is where, he says, they could get a fair shot at making it through this pandemic.

“The second wave really hit us hard,” Hussein said. “We are really in a prison now. We will get out of that prison.”

Thorncliffe Park has been a hotspot since the start of the pandemic, with a disproportionately higher number of COVID-19 cases. According to the latest 2016 census, more than 20,000 people live there. Community leaders say the current number is much higher, with more than 30,000 people living in a three kilometre radius, a statistic they say makes the neighbourhood in Toronto’s east end the most densely populated in Canada.

The vast majority of residents live in apartment towers, and Hussein says families on average include five people. Most of them are newcomers and many are essential workers. How they live, and what they do, puts them at higher risk of catching COVID and spreading it.

It’s why Hussein is advocating to have the entire neighbourhood prioritized for vaccination.

“A lot of these buildings are 15 floors, 20 floors, some of them 25 floors,” Hussein said, adding that most of the aging buildings only have two working elevators.

“When 2,000 or 3,000 people are coming down elevators at the same time when their kids are going to school, you can imagine how people will be close to each other, and that’s the risk of spread. So having an immunization will clearly improve [safety for] people to go back to work, to earn an income, pay their rents and take care of their children.”

It would also help alleviate the mental health toll, he says: 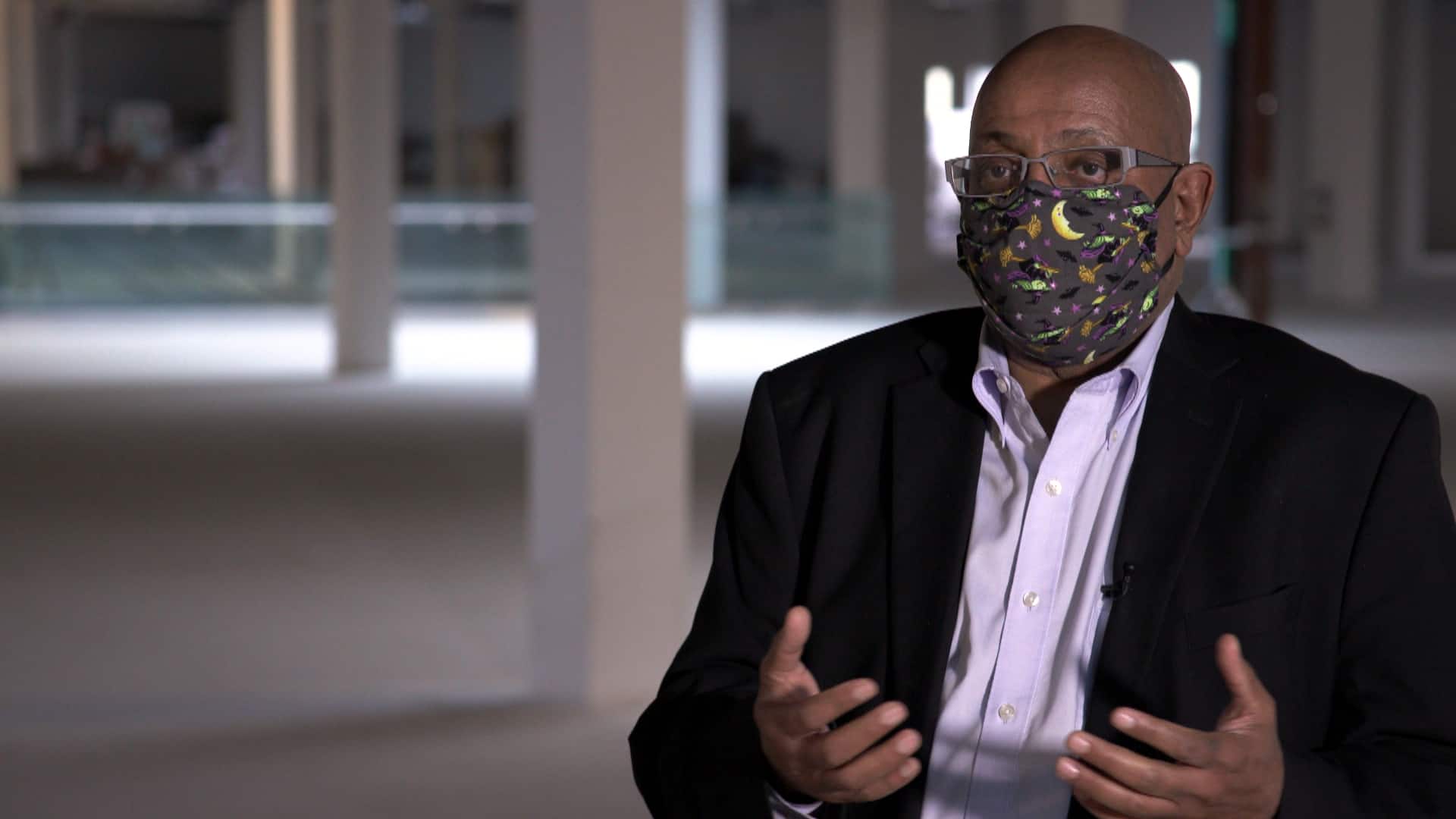 Ahmed Hussein, director of The Neighbourhood Organization in Thorncliffe, tells CBC’s Ioanna Roumeliotis that the densely populated Toronto community is doing all it can to follow COVID-19 safety measures, but people are still worried about infection all the time. 0:33

This is not a case for jumping the queue, he and other advocates say. It’s about reframing risk to recognize that entire pockets of people are more vulnerable because of their socioeconomic status.

Hussain Rifnaz is one example.

“I got the fever, and the worst was the body pain,” he said.

When Rifnaz got sick with COVID-19 last October, his wife and four children all got infected. Rifnaz works in public transit, servicing subway lines. He says he might have caught COVID on the job, or in his building’s crowded elevators, or maybe it came from his children’s school. Before Ontario’s latest lockdown, Thorncliffe Park Public School was among the hardest hit in the city. Dozens of students tested positive in an asymptomatic screening pilot in December.

Rifnaz said a vaccine would stop that invisible spread in the community from moving even further, as people like him have to go to work even in a lockdown.

“They have a big chance of getting lots of COVID from this area, so therefore, we should be taking care of this area first as a priority. It will be helpful for the Toronto city.”

The City of Toronto has identified at-risk areas like Thorncliffe Park, and set up pop-up testing sites and city-run isolation centres to help identify cases and contain them.

Wearing a mask, gloves and a face shield, Tabasum Mohammadi hands out flyers with information about those resources in the lobby of her building. Mohammadi is a community ambassador, and her role as a volunteer is to spread awareness about public health guidelines.

Glancing towards a lineup forming for the elevators, she said being on constant guard is exhausting. Quicker access to a vaccine would ease a perpetual sense of dread.

“Once we get vaccinated, at least we will reduce the numbers and we will be able to get protected,” Mohammadi said. “We’ll be mentally relaxed once the vaccine is here.”

The stress is unique to disadvantaged neighbourhoods, and it’s why many are making the same case for priority access to vaccines.

In the north-west neighbourhood of Weston-Mount Dennis, the buses tell the story of a community on the outskirts and struggling to get by. The bus lines here are among the busiest in Toronto, taking people to work in factories, grocery stores, and nursing homes. Those same people carry that risk back home, where many live with multiple family members.

Joseph says the barriers are built-in and hard to overcome. Tight living conditions are one issue. So is poverty and lack of paid sick leave. Many people here tend to have multiple jobs that compound the risk of exposure, and they can’t afford to miss work if they don’t feel well.

Early access to vaccines here is a shield of protection that is desperately needed.

“These communities are often left behind,” Joseph said. “It’s very important that we ensure that they are not forgotten. And in this case, because they are experiencing a disproportional level of COVID and also the impacts of COVID economically, then we should make sure that they’re a priority.”

Joseph says the risks here are too high to ignore. 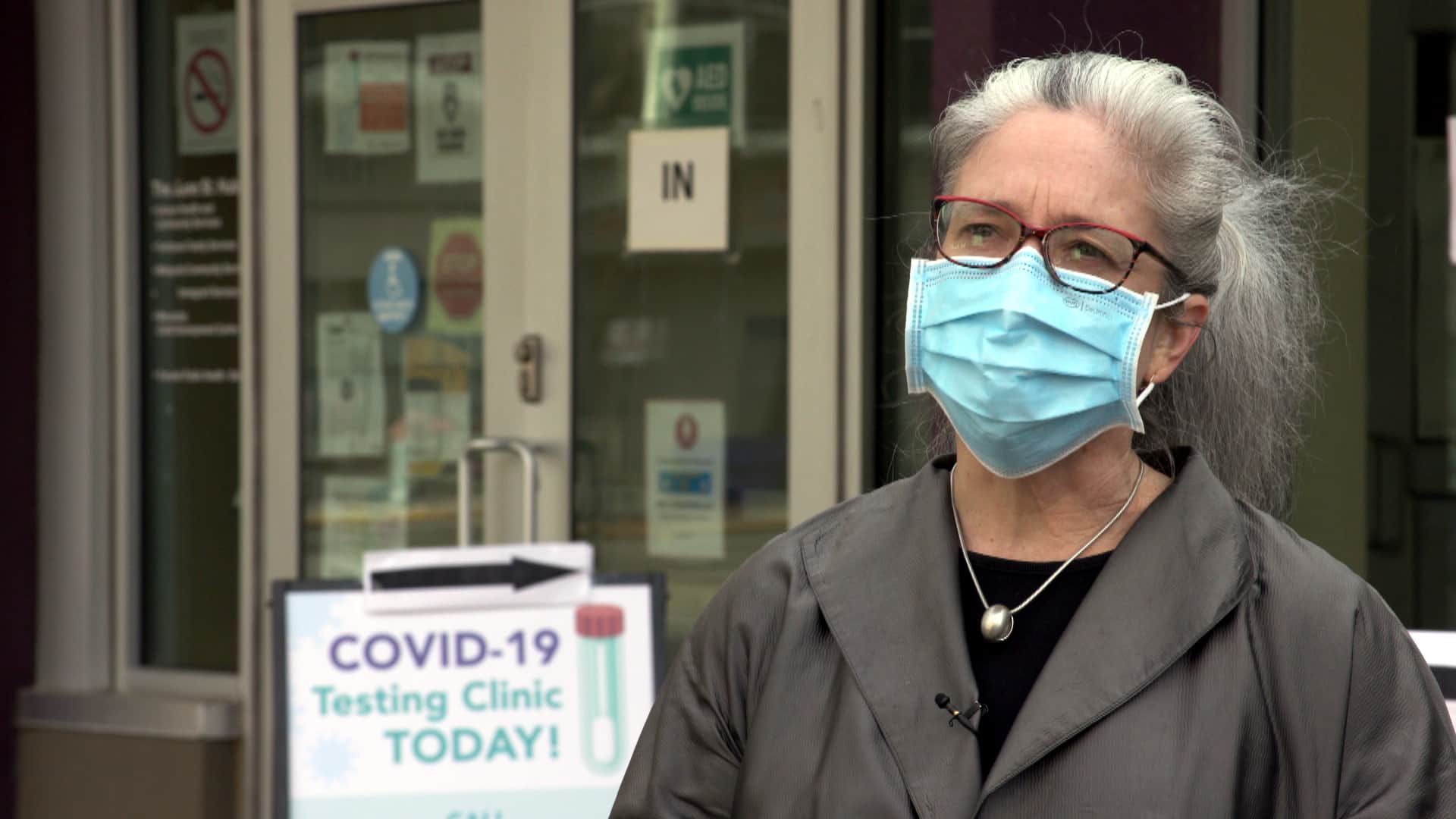 Michelle Joseph, CEO of Unison Health & Community Services, tells CBC’s Ioanna Roumeliotis that the risk factors of specific communities and their populations should be taken into account when health authorities are prioritizing who gets vaccinated for COVID-19. 0:59

To strengthen that call, several communities have banded together to make a collective case for prioritization. Tied by common threads of inequity, it’s a call that grows more urgent by the day.

Further west of Weston-Mount Dennis, in the community of Rexdale, for many it has come down to survival. At a community hub, local volunteers like Bibi Hack package bags of donated food. Hack says the need has skyrocketed as more people lose jobs or are too sick to work.

“They don’t have transportation, they don’t have money, and they’re scared to go out. This is so helpful, without this I don’t know how a lot of people would survive, believe me.”

Pascal Lumbala is the manager of the COVID Community Response with Rexdale Community Health Centre. Standing outside a COVID-19 testing centre set up in the community to make testing more accessible, Lumbala says while up to 200 people a day have been tested at three testing sites in the area, many in the low-income neighbourhood are reluctant to come because a positive result would mean staying home and missing work.

“These people have bills and they have to pay those bills,” Lumbala said. “Because of that fear, this could be an issue for them to go to work, so they don’t get tested”: 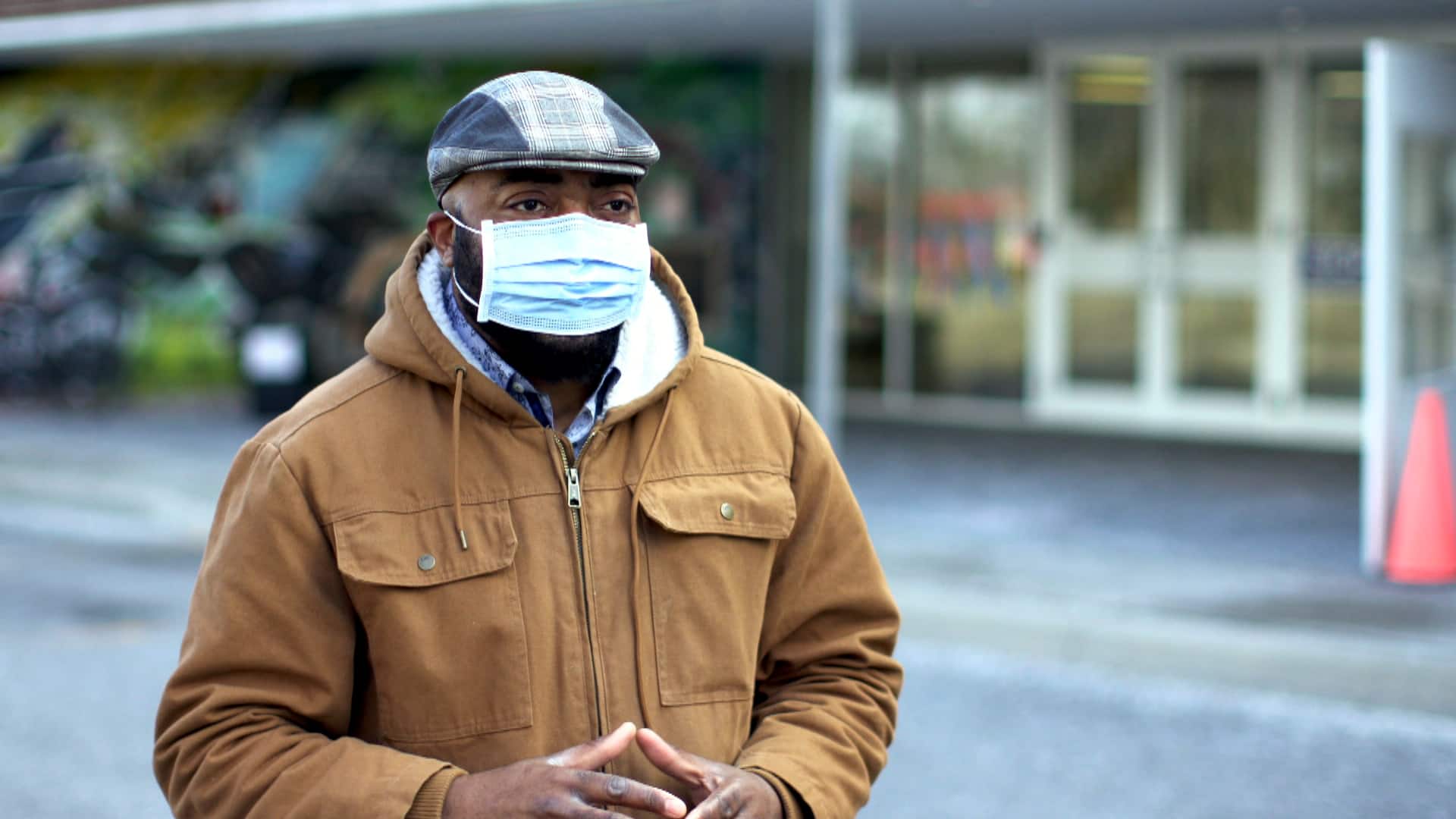 Pascal Lumbala, the manager of the COVID Community Response with Rexdale Community Health Centre, tells CBC’s Ioanna Roumeliotis that a COVID-19 infection can be devastating for families in the neighbourhood that are already struggling to get by financially. 0:58

As is the case in other vulnerable communities, many people here live in high-rises. The spread of infection, with several family members living in one space and usually with one bathroom, is almost inevitable, says Lumbala.

Getting a vaccine soon could give people here a better chance of staying healthy and simply staying afloat. But he adds that there is a need to educate people about the vaccine in order to help combat hesitancy.

“We are working on some messages,” Lumbala said. “We are working on having some workshops to educate the population so they will understand the importance of getting this vaccine and to protect the entire community.”

Back in Thorncliffe Park, Mohammadi continues handing out flyers, undeterred by people who don’t bother to take one.

She says until vaccines become more widely available, she too will educate people about the need to get immunized and will keep making the case for safety. Mohammadi has four children, and says she owes it to them and everyone in her community.

“It’s a home here, and I want to protect all my family members. This building is a home for me.”

But while the case to prioritize whole neighbourhoods for immunization is compelling, the outcome is uncertain.

Government and public health authorities decide who gets the vaccine and in what order, and it’s not clear when communities advocating for priority access will find out where they end up on any list.

The city of Toronto and local health authorities are supporting the initiative, but the province of Ontario will make the call once it starts offering vaccines to the general public.

Meanwhile, there’s no denying the need, or the commitment to keep fighting because of it. Back at the former Target store where community leader Ahmed Hussein wants to set up a mass vaccination site, there’s now a temporary food bank. It was established during the pandemic and Hussein wants nothing more than to see it go.

“COVID created this, and we hope the immunization and the vaccines will shut it down.”

Arms wide open, Hussein looks around the empty space and says he sees only promise, and better days ahead.

Watch full episodes of The National on CBC Gem, the CBC’s streaming service.