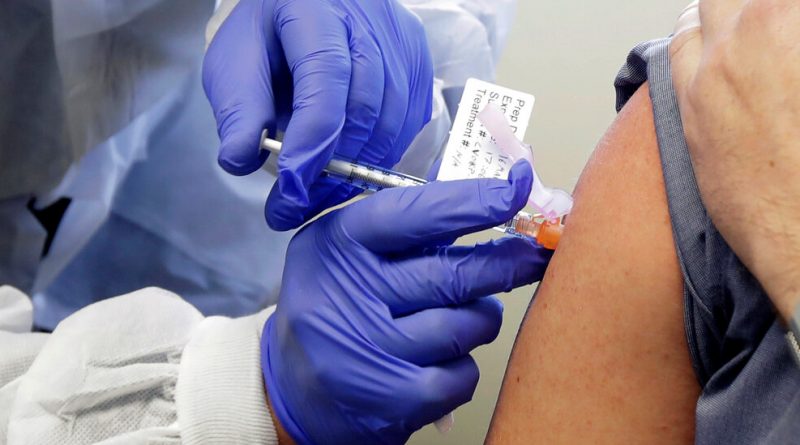 WASHINGTON — The coronavirus vaccine made by Moderna is highly protective, according to new data released on Tuesday, setting the stage for its emergency authorization this week by federal regulators and the start of its distribution across the country.

The Food and Drug Administration intends to authorize use of the vaccine on Friday, people familiar with the agency’s plans said. The decision would give millions of Americans access to a second coronavirus vaccine beginning as early as Monday.

The data included in a review by the F.D.A. confirms Moderna’s earlier assessment that its vaccine had an efficacy rate of 94.1 percent in a trial of 30,000 people. Side effects, including fever, headache and fatigue, were unpleasant but not dangerous, the agency found.

The success of Moderna’s vaccine has become all the more crucial to fighting the pandemic as other vaccine efforts have faltered. The hopeful news arrives at a time of record-breaking numbers of coronavirus cases that are overwhelming hospitals and of an ever-increasing death toll, which reached a bleak milestone of 300,000 on Monday.

The data release is the first step of a public review process that will include a daylong meeting on Thursday by an independent advisory panel of experts. They will hear from Moderna, F.D.A. scientists and the public before voting on whether to recommend authorization. The panel is expected to vote yes, and the F.D.A. generally follows the experts’ recommendations.

Distribution of about six million doses could then begin next week, significantly adding to the millions of doses already being shipped by Pfizer and BioNTech, the companies that developed the first coronavirus vaccine given emergency clearance just last Friday. Health care workers received the first shots on Monday of the Pfizer-BioNTech vaccine, which has an efficacy rate of 95 percent.

The vaccine rollout has been highly anticipated, and is one of the most ambitious immunization campaigns ever conducted in the United States.

The federal government signed deals last summer with Moderna and Pfizer to deliver a total of 200 million doses in the first quarter of 2021. Because both vaccines require two doses, those contracts guaranteed enough doses for 100 million people.

Last week the government announced that it had purchased another 100 million doses from Moderna for the second quarter, increasing the number of Americans who can be vaccinated to 150 million. But that still leaves the question of how and when the roughly 180 million other Americans will be covered.

Both vaccines will be provided to the public free of charge.

Moderna’s vaccine has become a symbol of the triumphs of government scientists during the pandemic. After China released the genetic sequence of the new virus in early January, scientists at Moderna and the National Institutes of Health were able to zero in on the design for a vaccine in just two days. Unlike Pfizer, Moderna has maintained a close relationship with Operation Warp Speed, the federal program intended to quickly bring a vaccine to market. Nearly $2.5 billion in federal funds helped Moderna buy raw materials, expand its factory and enlarge its work force by 50 percent.

Moderna’s success stands in contrast to two other high-profile projects that the United States had hoped would augment its supply of vaccines: one from the pharmaceutical companies Sanofi of France and GlaxoSmithKline of Britain, and another from the British-Swedish drug maker AstraZeneca and the University of Oxford.

AstraZeneca and Oxford ended up using two different doses in clinical trials in Britain and Brazil. At one level, the efficacy was 62 percent, and at the other it was 90 percent. These muddled results have left it unclear when AstraZeneca will have enough data to secure an emergency use authorization.

Meanwhile, Sanofi and GlaxoSmithKline received disappointing results from their vaccine in early clinical trials. While it produced a promising immune response in volunteers under 50, it failed to do so in older ones. The companies are now planning a new set of trials with a different version of the vaccine. The delay means they would be unlikely to provide vaccines before the end of 2021.

Moderna’s vaccine worked equally well in white volunteers and in communities of color. There was also no significant difference between its protection for men and women, or between healthy volunteers and those at risk of severe Covid-19 who had conditions like obesity and diabetes. For people 65 and older, the trial provided an estimated efficacy of 86.4 percent, lower than the overall estimate of 94.1 percent. But the apparent difference was not statistically significant.

So far, two potential differences between the vaccines have emerged from the F.D.A.’s reviews, but the findings may reflect a shortage of data rather than genuine differences. The Pfizer-BioNTech trial showed that their vaccine started to protect against the coronavirus within about 10 days of the first dose. The trial of Moderna’s vaccine, by contrast, did not reveal such a striking effect after the first dose.

But fewer cases of Covid-19 occurred among trial participants in the early days of the Moderna trial, making it harder to measure differences between the vaccinated group and the placebo group. In any case, health officials have said that for both vaccines, two doses are essential for full protection.

A second difference involves the ability to prevent severe disease. Moderna produced more evidence that its vaccine can do so, according to the review. In its trial, 30 volunteers developed severe cases of Covid. All of them were in the placebo group, with no cases among the people who were vaccinated.

In the Pfizer-BioNTech trial, the findings were less compelling. There were 10 severe cases in the placebo group and one in the vaccinated group. Those numbers are too small to gauge the vaccine’s ability to prevent serious illness.

“The available data for these outcomes did not allow for firm conclusions,” the F.D.A. said.

The documents published Tuesday made clear that side effects were particularly common after the second dose, but typically lasted only a day. Experts say people may need to take a day off work after getting the shot.

During the Moderna trial, researchers also kept an eye out for volunteers who developed new disorders. In a trial lasting several months with 30,000 volunteers, it is normal for some to come down with conditions that have nothing to do with the vaccine, health experts say. Comparing the rates between the people who get the vaccine and the placebo — as well as general background rates — can help pinpoint serious concerns and rule out coincidences.

During the Moderna trial, three vaccinated participants developed a form of temporary facial paralysis called Bell’s palsy, while one participant with the placebo also experienced it. Bell’s palsy, which can last weeks or longer, can be triggered by viral infections and other causes. Some 40,000 people develop the condition each year in the United States. Years of intense research has failed to find evidence that any vaccine routinely recommended in the United States causes Bell’s palsy.

In the review released on Tuesday, the F.D.A. said: “Currently available information is insufficient to determine a causal relationship with the vaccine.”

In the Pfizer-BioNTech trial, four cases were detected in the vaccine group, including one in a person with a history of the disorder, and none in the placebo group.

Dr. Peter Marks, the F.D.A.’s top vaccine regulator, said Monday in an interview with JAMA that the cases of Bell’s palsy in the trial were most likely not caused by the vaccine, and that the seeming difference between the two groups of volunteers was just a matter of chance.

“Our working hypothesis is just that this is an imbalance in background rates, like we’ve seen in other trials,” he said.

In its analysis of the Moderna vaccine published Tuesday, the F.D.A. said it planned to recommend tracking Bell’s palsy cases as the vaccines roll out.

“We’re going to query for that, just to bring that question to close,” Dr. Marks said on Monday.

The F.D.A.’s analysis did not find serious allergic reactions to the Moderna vaccine. The same was true in the Pfizer-BioNTech clinical trial, but when vaccinations began in Britain outside that trial, two people with a history of serious allergies had a severe and potentially life-threatening reaction called anaphylaxis.

British health officials have said that people with a history of anaphylaxis should avoid the Pfizer-BioNTech vaccine.

But in the United States, the Centers for Disease Control and Prevention has said that people with serious allergies can be safely vaccinated, with close monitoring for 30 minutes after receiving the shot.

The Moderna and Pfizer-BioNTech vaccines are similar in their ingredients, but not identical, so it is not clear whether an allergic reaction to one would occur with the other. Both consist of genetic material called mRNA encased in a bubble made from a mixture of fats. The two companies use different fats.

Moderna has requested authorization to vaccinate people 18 and older, like those in its study. The Pfizer-BioNTech vaccine was authorized for people as young as 16, because the trial had some younger volunteers. Both companies are running trials on children as young as 12 and have plans to start studying even younger children.