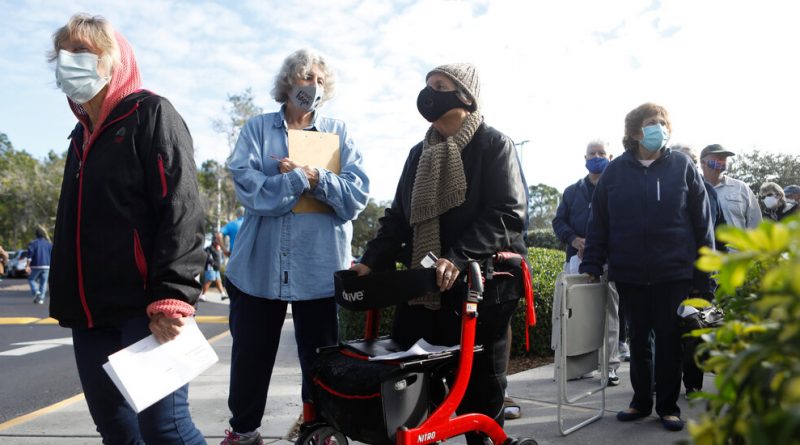 As governments around the world rush to vaccinate their citizens against the surging coronavirus, scientists are locked in a heated debate over a surprising question: Is it wisest to hold back the second doses everyone will need, or to give as many people as possible an inoculation now — and push back the second doses until later?

Since even the first shot appears to provide some protection against Covid-19, some experts believe that the shortest route to containing the virus is to disseminate the initial injections as widely as possible now.

Officials in Britain have already elected to delay second doses of vaccines made by the pharmaceutical companies AstraZeneca and Pfizer as a way of more widely distributing the partial protection afforded by a single shot.

Health officials in the United States have been adamantly opposed to the idea. “I would not be in favor of that,” Dr. Anthony S. Fauci, the nation’s top infectious disease expert, told CNN on Friday. “We’re going to keep doing what we’re doing.”

But on Sunday, Moncef Slaoui, scientific adviser of Operation Warp Speed, the federal effort to accelerate vaccine development and distribution, offered up an intriguing alternative: giving some Americans two half-doses of the Moderna vaccine, a way to possibly milk more immunity from the nation’s limited vaccine supply.

The rising debate reflects nationwide frustration that so few Americans have gotten the first doses — far below the number the administration had hoped would be inoculated by the end of 2020. But the controversy itself carries risks in a country where health measures have been politicized and many remain hesitant to take the vaccine.

“Even the appearance of tinkering has negatives, in terms of people having trust in the process,” said Natalie Dean, a biostatistician at the University of Florida.

The public rollout remained bumpy over the weekend. Seniors lined up early for vaccinations in one Tennessee town, but the doses were gone by 10 a.m. In Houston, the Health Department phone system crashed on Saturday, the first day officials opened a free vaccination clinic to the public.

Nursing home workers in Ohio were opting out of the vaccination in great numbers, according to Gov. Mike DeWine, while Mayor Eric Garcetti of Los Angeles, now a center of the pandemic, warned that vaccine distribution was moving far too slowly. Hospitalizations of Covid-19 patients during the past month have more than doubled in California.

All of them are intended to be delivered in multiple doses on a strict schedule, relying on a tiered protection strategy. The first injection teaches the immune system to recognize a new pathogen by showing it a harmless version of some of the virus’s most salient features.

After the body has had time to study up on this material, as it were, a second shot presents these features again, helping immune cells commit the lesson to memory. These subsequent doses are intended to increase the potency and durability of immunity.

Clinical trials run by Pfizer-BioNTech and Moderna showed the vaccines were highly effective at preventing cases of Covid-19 when delivered in two doses separated by three or four weeks.

Some protection appears to kick in after the first shot of vaccine, although it’s unclear how quickly it might wane. Still, some experts now argue that spreading vaccines more thinly across a population by concentrating on first doses might save more lives than making sure half as many individuals receive both doses on schedule.

That would be a remarkable departure from the original plan. Since the vaccine rollout began last month in the United States, second shots of the vaccines have been held back to guarantee that they will be available on schedule for people who have already gotten their first injections.

But in Britain, doctors have been told to postpone appointments for second doses that had been scheduled for January, so that those doses can be given instead as first shots to other patients. Officials are now pushing the second doses of both the Pfizer-BioNTech and Oxford-AstraZeneca vaccines as far back as 12 weeks after the first one.

But some researchers fear the delayed-dose approach could prove disastrous, particularly in the United States, where vaccine rollouts are already stymied by logistical hurdles and a patchwork approach to prioritizing who gets the first jabs.

Federal health officials said last week that some 14 million doses of the Pfizer-BioNTech and Moderna vaccines had been shipped out across the country. But as of Saturday morning, just 4.2 million people in the United States had gotten their first shots.

That number is most likely an underestimate because of lags in reporting. Still, the figure falls far short of the goal that federal health officials set as recently as last month to give 20 million people their first shots by the end of 2020.

Many of these rollout woes are caused by logistical issues — against the backdrop of a strained health care system and skepticism around vaccines. Freeing up more doses for first injections won’t solve problems like those, some researchers argue.

Shweta Bansal, a mathematical biologist at Georgetown University, and others also raised concerns about the social and psychological impacts of delaying second doses.

“The longer the duration between doses, the more likely people are to forget to come back,” she said. “Or people may not remember which vaccine that they got, and we don’t know what a mix and match might do.”

In an emailed statement, Dr. Peter Marks, director of the Center for Biologics Evaluation and Research at the Food and Drug Administration, endorsed only the strictly scheduled two-dose regimens that were tested in clinical trials of the vaccines.

The “depth or duration of protection after a single dose of vaccine,” he said, can’t be determined from the research published so far. “Though it is quite a reasonable question to study a single-dose regimen in future clinical trials, we simply don’t currently have these data.”

Dr. Slaoui of Operation Warp Speed said in an emailed statement on Sunday that “the approach some countries are taking of delaying the booster shot could backfire and could decrease confidence in the vaccines.”

The vaccine makers themselves have taken divergent positions.

In a trial of the Oxford-AstraZeneca vaccine, volunteers in Britain were originally intended to receive two doses given four weeks apart. But some vaccinated participants ended up receiving their doses several months apart, and still acquired some protection against Covid-19.

An extended gap between doses “gives you a lot of flexibility for how you administer your vaccines, dependent on the supply that you have,” said Menelas Pangalos, executive vice president of biopharmaceuticals research and development at AstraZeneca.

Delayed dosing could help get countries “in very good shape for immunizing large swaths of their populations to protect them quickly.”

Steven Danehy, a spokesman for Pfizer, struck a far more conservative tone. “Although partial protection from the vaccine appears to begin as early as 12 days after the first dose, two doses of the vaccine are required to provide the maximum protection against the disease, a vaccine efficacy of 95 percent,” he said.

“There are no data to demonstrate that protection after the first dose is sustained after 21 days,” he added.

Ray Jordan, a spokesman for Moderna, said the company could not comment on altering dosing plans at this time.

There is no dispute that second doses should be administered sometime near the first dose. “They key is to expose the immune system at a time when it still recognizes” the immunity-stimulating ingredients in the vaccine, said Angela Rasmussen, a virologist affiliated with Georgetown University.

During a public health emergency, “companies will tend to pick the shortest period they can that gives them that full, protective response,” said Dr. Dean of the University of Florida.

But it’s unclear when that critical window really starts to close in the body. Akiko Iwasaki, an immunologist at Yale University who supports delaying second doses, said she thought the body’s memory of the first injection could last at least a few months.

Doses of other routine vaccines, she noted, are scheduled several months apart or even longer, to great success. “Let’s vaccinate as many people as possible now, and give them the booster dose when they become available,” she said.

Dr. Robert Wachter, an infectious disease physician at the University of California, San Francisco, said he was originally skeptical of the idea of delaying second doses.

But the disappointingly slow vaccine rollout in the United States, coupled with concerns about a new and fast-spreading variant of the coronavirus, have changed his mind, and he now believes this is a strategy worth exploring.

“The past couple weeks have been sobering,” he said.

Other researchers are less eager to take the gamble. Delaying doses without strong supporting data “is like going into the Wild West,” said Dr. Phyllis Tien, an infectious disease physician at the University of California, San Francisco. “I think we need to follow what the evidence says: two shots 21 days apart for Pfizer, or 28 days apart for Moderna.”

Some experts also fear that delaying an immunity-boosting second dose might give the coronavirus more opportunity to multiply and mutate in partly protected people.

There is some evidence to support the alternative strategy of halving the dose of each shot, suggested on Sunday by Mr. Slauoi of Operation Warp Speed.

In an interview on the CBS program “Face the Nation,” Dr. Slaoui pointed to data from clinical trials run by Moderna, whose vaccine is typically given in two doses, four weeks apart, each containing 100 micrograms of active ingredient.

In the trials, people between the ages of 18 and 55 who received two half-doses produced an “identical immune response to the 100 microgram dose,” Dr. Slaoui said. The F.D.A. and Moderna are now considering implementing this regimen on a more widespread scale, he added.

While there’s little or no data to support the soundness of delayed dose delays, Dr. Slaoui said, “injecting half the volume” might constitute “a more responsible approach that will be based on facts and data to immunize more people.”

But Dr. Dean and John Moore, a vaccine expert at Cornell University, both pointed out that this regimen would still represent a departure from the ones rigorously tested in clinical trials.

A half-dose that elicits an immune response that appears similar to that triggered by a full dose may not in the end deliver the expected protection against the coronavirus, Dr. Moore noted. Halving doses “is not something I would want to see done unless it were absolutely necessary,” he said.

“Everyone is looking for solutions right now, because there is an urgent need for more doses,” Dr. Dean said. “But the dust has not settled on the best way to achieve this.”