Canada’s classical music community is mourning the loss of violinist Yehonatan Berick, 52, who died on Oct. 31. The news came as a shock for most who knew him but were unaware that he had received a terminal cancer diagnosis only two weeks ago.

“There is a big, Y-shaped hole in the world today and I cannot, cannot, cannot believe it,” posted pianist and fellow University of Ottawa professor David Jalbert on Facebook. “Devastating to lose such a dear friend and colleague too soon, a man so kind and generous and always ready to laugh…. Rest in power, Yehonatan Berick, we are not about to forget you.”

Berick had been a driving force at the University of Ottawa’s annual summer string academy, which offers intensive instruction for emerging classical musicians.

Israeli-born, Berick completed his studies in Cincinnati before moving to Canada in the mid-1990s. Here, he soon established himself as a teacher, soloist and chamber musician of distinction, performing in concert series throughout North America.

“Yehonatan was the most earnestly good human being that I have ever met,” reflected Jonathan Crow, concertmaster of the Toronto Symphony Orchestra, in an email to CBC Music. Crow studied with Berick at McGill University before becoming his friend and frequent chamber music colleague. “[He] was one of those rare people who filled up a room with his relentlessly positive presence. A deeply compassionate and caring human, he brought out the best in everyone around him. He will be so deeply missed by the countless students and colleagues who had the good fortune of crossing paths with him. I am so grateful to have had the chance to learn from him and to have had him as a friend. My heart goes out to his family in Ottawa and all around the world.”

In this clip from a 2009 performance at the University of Michigan, Berick demonstrated the sweet tone and technical precision that attracted listeners and colleagues alike.

Diana Cohen, concertmaster of the Calgary Philharmonic Orchestra, was among numerous friends and colleagues who described Berick as a “mensch.”

In a Facebook post, Emma Reader-Lee, one of Berick’s students at the University of Ottawa, addressed her prof in the second person, invoking his nickname, Big Y:

“I remember when we were working on Mozart 5th, he would literally dance around his studio getting me to feel the rhythm,” posted another former student, Helinda Ho, on Facebook. “His jovial nature and humour were infectious.”

University of Ottawa cello professor Paul Marleyn described Berick as “an amazingly dedicated, hard-working and capable colleague. He immediately developed an exceptional violin class, and has worked hard to build the uOttawa string area to where it is today. Big Y was always full of energy, passion, energy and joy of life. He loved life, loved music and loved being with people.”

Natasha Gauthier writes for Artsfile and Ottawa Magazine, and was the classical music critic at the Ottawa Citizen. She described Berick as a “magnificent violinist.”

Very sad to find out late last night about the sudden passing of Yehonatan Berick, a magnificent violinist, beloved music teacher and colleague at @uOttawaMusic, and just all-around mensch. My deepest condolences to his family. May his memory be a blessing.

In addition to friends, colleagues and fans, Berick is mourned by his partner, Rachel Mercer, principal cellist of the National Arts Centre Orchestra. He’s survived by two children.

Berick posted this video to his YouTube channel on Oct. 26: 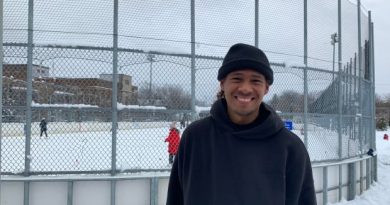