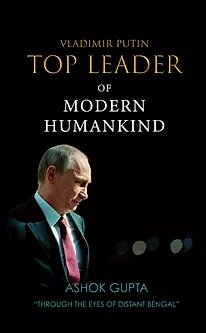 Through the eyes of the Bengal 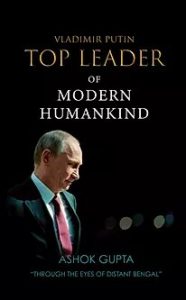 The philanthropic author Dr. Ashok Gupta has aid the Life story of the Great Leader and President Vladimir Putin and its charismatic , dynamic multi dimensional leadership that influence over the world focusing his strength , acumen , management of worldly affairs and foreign diplomacy .

The book of V.V. Putin emphasized strongly the participation of President Putin after the fall of Soviet Union (Former USSR) , his struggle to emerge new Russian Federation as super power before the global platform in search of global harmony , peace and multi lateral united friendship.

Motivation of the book summarized then leadership of President Putin , his legacy and aristocratic steps before the global politics , his convincing and friendly approach towards the development of peace and harmony into world affairs.

The Russian socio –economic structure, the foreign policies the flow of the economic inflation and technocracies are the main high lights of the book that President Putin possesses.

The Author with his third eye intellectual sights covers extensive summary of the President Putin and his struggle to convey Russian Federation – a Super Power to the Global platform .

Such splendid write up at international level will play a lead role into world politics symbolizing the Great leader as an Iconic Leader of the planet for the cause of peace , harmony and meeting up global socio political jargon.

Readers will be amazed to get to know the President Putin multi talented moral leadership quality , his self beliefs , his strategies , his sacrifices , his patriotism that emerged Russian Federation into great Super Power and thus Vladimir Putin now termed as most influential leader of the world before globalization .

The author Dr. Ashok Gupta belongs to Bangladeshi aristocratic family of veteran political leaders. He is philanthropist / economist /educationist andmember ,IIA , United nation. The author acquired extensive knowledge over Russian Federation and build strong social ties and served during many occasions keeping his socio – managerial roles for Eastern Europe and positioned in the CIS chamber of commerce as Chairman & President in several occasions , much to his credit. He also studied In Russia at St. Petersberg