Maybe it’s his job to prepare us for the worst, but Canada’s chief central banker, Tiff Macklem, has warned of a long, slow recovery as successive rounds of COVID-19 lead to a “scarring” of the domestic and world economy.

After what some see as a false dawn this summer as the economy resurged, Macklem, governor of the Bank of Canada, and his senior deputy, Carolyn Wilkins, offered a gloomy outlook for an economy that they say is unlikely to get back on track until 2023.

Not only that, but jobs — hit harder in this recession than the last one — are disproportionately affecting Canadians with the lowest wages. While 425,000 jobs disappeared following the 2008 credit crisis, this time around, employment has been cut by 700,000.

And Macklem said some of those jobs may never come back.

“We’re going to get through this, but it’s going to be a long slog,” he said at a virtual meeting with financial reporters on Wednesday.

The good news, if you could call it that, was that the central bankers have committed to keeping interest rates at current extraordinarily low levels until inflation climbs back to between two and three per cent, which they don’t foresee as likely for three years.

Forecasting the economy is always something of a guessing game, but Macklem and Wilkins said that this time there was added uncertainty because of not knowing what the novel coronavirus is going to do next.

The central bankers made it very clear that the current outlook depends on a number of assumptions about the path of the pandemic that may turn out to be better or worse than they currently foresee.

Among those assumptions is that the virus will return in succeeding waves, each less damaging than the last. Another is that a vaccine will not become widely available until 2022, a sobering estimate from sober central bankers that may be disheartening for those who had hoped U.S. President Donald Trump’s optimistic outlook of an October vaccine launch was more than just electioneering. 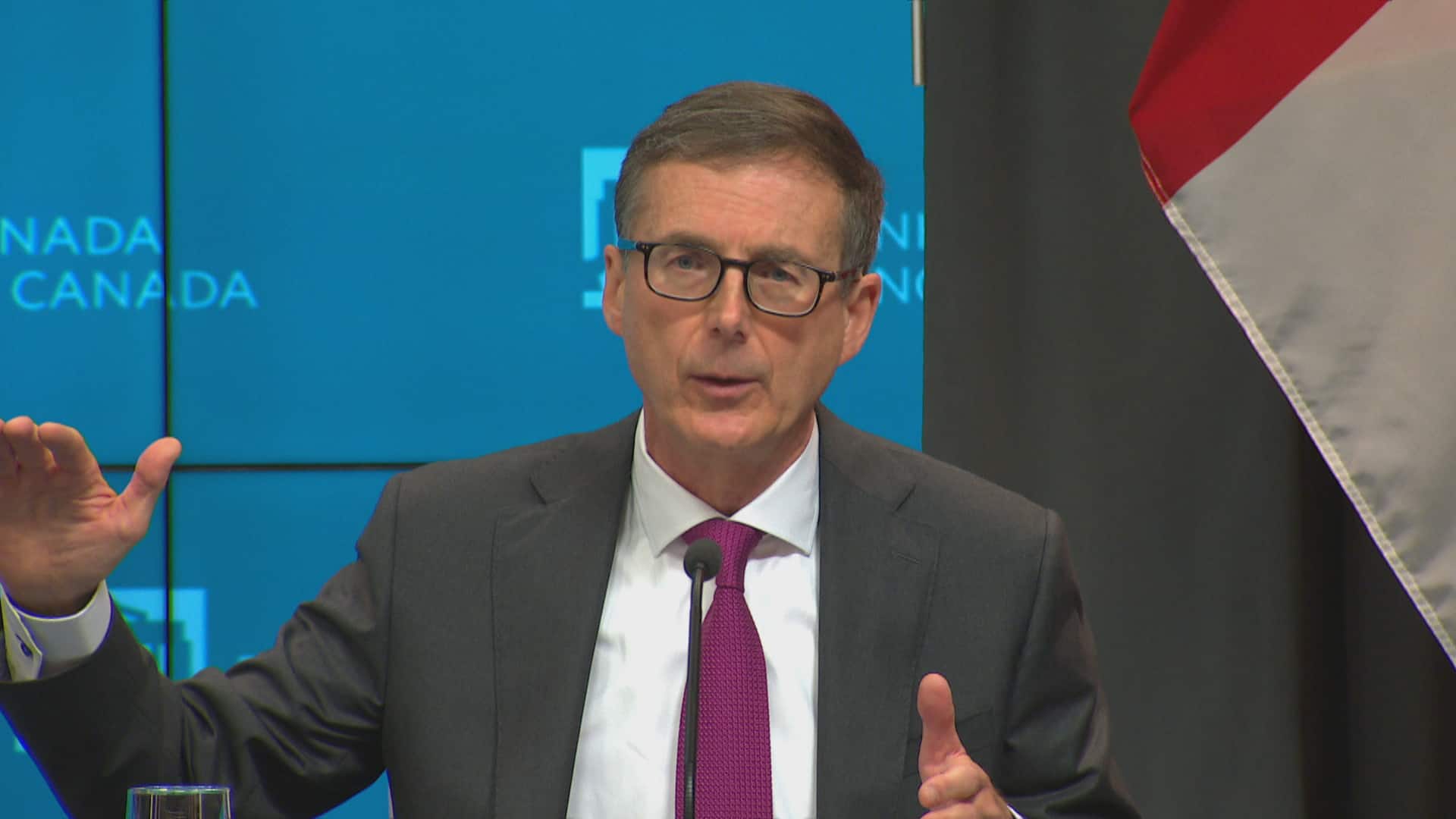 By promising that interest rates will stay low until 2023 — something central bankers call “forward guidance” — Macklem said he hopes businesses and consumers can confidently borrow for the medium term without fear that interest rates, and therefore loan repayments, will suddenly shoot up.

That’s good if you are buying a new stove but not for a home, or for a longer-term business investment. To influence those longer-term rates, the central bank has shifted the way it buys bonds as part of its quantitative easing plan that it initiated for the first time following the COVID-19 market disruption.

When the market crisis hit in early spring, the bank bought short-term bonds to help increase the amount of money in circulation, reassuring investors, Macklem said. But now that markets are working more normally, the Bank of Canada has reduced its monthly bond purchases from $5 billion to $4 billion and is switching to buying bonds that don’t mature for up to 30 years, in theory making longer-term loans cheaper.

But while making borrowing cheap will help, the central bank worries that it won’t be enough to prevent the economy from being scarred by large employment losses as some people’s jobs never come back.

“We’ve assumed that a fraction of these people are permanent,” Wilkins said. “That’s because with COVID, not only is the recovery going to take longer so that there is more chance there’ll be scarring, it’s also the types of jobs created.”

As the economy rebounds, she said, the new jobs available will not match the skills of those who became unemployed. Among those worst hit will be women and young people.

“The effects of this pandemic have been extremely uneven,” Macklem said, directing reporters to a “particularly stunning” chart in the Monetary Policy Report, reproduced below, showing low-income workers have suffered more and their jobs have uniquely failed to recover.

Just as we saw during the long climb out of the last recession, replacing those jobs will require new private investment, some of it in entirely new sectors. But with so much uncertainty — and so much permanent structural change — Macklem said many companies will be hesitant to invest until things begin to stabilize.

Macklem’s current economic outlook is only a best guess based on so many unknowns. It may be that the virus gets even worse, he said, and it may be that a vaccine does not arrive until later than the bank has estimated or that it is ineffective.

But while the central bank is compelled to consider the bleakest case in its economic planning, Macklem does not exclude the possibility of a far less gloomy outcome, which he said would be “wonderful.”

“There’s certainly scenarios where a vaccine is available early next year and it proves effective, and we can deploy it at scale so that by the end of the year, we don’t need to physically distance anymore.”

And from a central banker, that is a positive ray of sunshine.

Canada’s inflation rate was 0.1% in August even as gas and plane ticket prices plummeted