Former chief of Hefajat-e-Islam Allama Shah Ahmed Shafi was killed by the ghosts of Jamaat-Shibir, alleged Mohammad Moeenuddin, brother-in-law of Shafi on Saturday.

He also sought justice from Prime Minister Sheikh Hasina in this regard.

Moeenuddin made the allegation at a briefing arranged under the banner of ‘Hefajat-e-Islam Bangladesh’ at Chattogram Press Club on Saturday.

“Allama Shah Ahmed Shafi was killed at Hathazari Madrasa by the ghosts of Jamaat-Shibir in a pre-planned way on September 18. Shafi met this tragic fate as he was the supporter of Independence,” said Moeenuddin.

During the briefing brother-in-law of the former Hefajat chief also demanded halt of the organisation’s council dated for tomorrow (Sunday). Besides, he demanded judicial inquiry into the death of Allama Shafi.

At briefing, Moeenuddin said, “Shafi hujur often made remarks against anti-liberation force and also wrote books against them. Jamaat-Shibir had angered over this issue for a long time. This anger worked behind his killing.”

He said, “On September 16, a group of Hathazari Madrasa students instigated by the Jamaat-Shibir confined the madrasa. Junaid Babunagari took position inside the madrasa and vandalised and looting were operated by Mir Idris, Nasir Uddin Munir, Mufti Harun and Injamul Hasan. Several Islami books were also torched at that time.”

Attackers stormed into Allama Shafi’s room and forced him to resign after vandalizing there and torture on him, claimed Moeenuddin.

“Shafi was given oxygen after he fell sick. But he suffered to death when the ghosts of Jamaat-Shibir removed the oxygen mask from him. Even they did late to release the ambulance from the madrasa,” he added.

Terming the death of Allama Shafi as killing, Moeenuddin on behalf of the Shafi’s wife Firoza Begum and family sought justice to the Prime Minister. 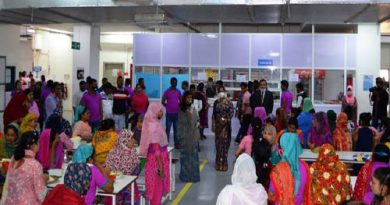