The insurance regulator wants to popularise insurance in the country and ensure good governance in the companies in order to make the industry stable, accountable and transparent.

He said the negative perception of insurance among people is one of the key obstructions to the growth of the sector, for which people are not getting real benefits from the sector.

The country has very low penetration of insurance compared to the global average, though insurance should have been the first priority for people and the economy, as the country has been marching towards economic prosperity, he added.

“The sector has image crisis and there are intrinsic weaknesses in the sector, so my target is to create a positive image of the industry by strengthening the internal control system of companies,” said the IDRA chairman.

He said the insurance funds work as seed money for the industry, create employment and contribute to economic development through ‘forced’ savings feature of insurance.

“There is no doubt that insurance is essential for today’s economy, you may even call it mandatory for the economy,” he said.

M Mosharraf Hossain, who joined the IDRA as a member on April 4, 2018, took over as its chairman in September this year.

In his 26-year career, Mr Hossain worked as chief executive officer of several life insurance companies, head of operations at an insurance company, and managing director at a merchant bank. He was also the vice president of the Bangladesh Merchant Bankers Association.

“I know ins and outs of the industry as I have worked here for a long time; I know the weaknesses and potentials and I may help the industry grow positively,” he said.

His short term goal as the chairman of the regulator is to continue its legacy and resolve pending issues, said Mr Hossain.

“But in the long run, I want to create some mechanisms and strengthen internal control systems so that the regulator can supervise the total activities of a company.”

He said penetration and density of insurance in the country is very low.

“I will work to increase penetration and acceptance of insurance in all walks of life in society,” he said.

Bangladesh plans to reach a Tk 3 trillion GDP in the future and “I want to ensure 10 per cent share from the insurance sector in the GDP,” he added.

Admitting that there are rampant irregularities in the insurance sector, Mr Hossain said he is more interested in building internal control systems in the sector than in punishing wrongdoers.

“I will make it difficult to commit an offence, but if any company still continues to do so, it will receive remarkable punishment,” he said.

He also said IDRA will set some thresholds for the sector for internal checks.

“We are going to set a minimum threshold for the number of allegations against an insurance company.”

“If there is an increasing number of allegations, we will consider the factors during the appointment of the managing director in position and the company will come under strict IDRA supervision,” said the IDRA chairman.

“Allegations from claimants must be as minimum as possible.”

IDRA will also set the ratio of paid claims in a certain company to ensure accountability of the company and make its business stable, said Mr Hossain.

“For example, the percentage of the payment of claims by a company should be at least 80 per cent. In that case, if one company receives Tk 1.0 billion claims in a year, Tk 800 million should be paid,” he said.

Such thresholds will make a company stable and if insurance companies become stable, it will be able to pay more claims, which will ensure customer satisfaction and ultimately build a positive image of the sector, he added.

The IDRA chairman said they would strictly ensure 15 per cent commission to agents of non-life insurance in order to make compliance with a regulatory notice issued in 2012.

“We will also ensure a positive impact in the financials of 15 per cent commission and that their earning per share should be 1.5 per cent higher than the previous year,” he said.

He said the non-life insurance companies used to provide up to 70 per cent commission, which is unrealistic and cannot be called a business at all.

He also said many companies used to maintain more than 200 bank accounts to collect premiums but they would show less than 50 accounts in their financial reports.

The market size of non-life insurers is Tk 60 billion, but only Tk30 billion was shown in the financial reporting, he added.

“Where does this half of the amount go? This is a very serious matter,” he said.

As a result, the government is being deprived of Tk10 billion in revenues, he added.

“This has to be stopped. The regulator will check all such things in stricter ways,” he said.

Mr Mosharraf Hossain secured first class first position in M. Com. (accounting) and first class third in B. Com. examinations. He holds a PhD in insurance from Dhaka University and an MBA in risk and insurance from USTC and a diploma from the Bangladesh Insurance Academy.

A chartered accountant, he has authored eight books on insurance. 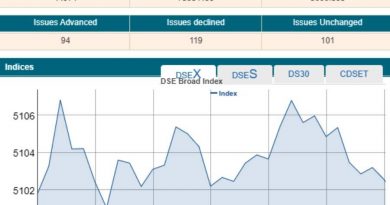 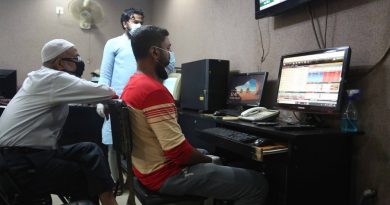 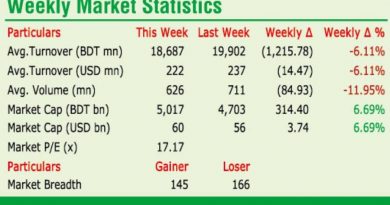