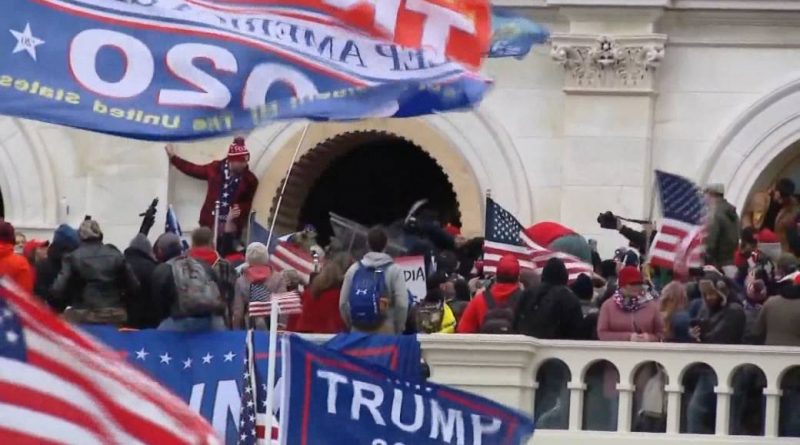 Prime Minister Justin Trudeau is highlighting the fragile nature of democracy following violence in D.C. on Wednesday, which he characterized as an “assault on democracy by violent rioters, incited by the current president and other politicians.”

“As shocking, deeply disturbing, and frankly saddening as that event remains, we have also seen this week that democracy is resilient in America, our closest ally and neighbour,” Trudeau said, speaking from the front steps of Rideau Cottage on Friday.

“Violence has no place in our societies, and extremists will not succeed in overruling the will of the people.”

Read more:
Online conspiracies can spark offline violence — and it could happen here

Trudeau’s comments come as the mob violently disrupted the certification of Joe Biden’s presidential election win on Wednesday, smashing windows and scaling the walls in an incident that left four dead.

2:41
Growing calls for Trump’s removal after storming of U.S. Capitol

Growing calls for Trump’s removal after storming of U.S. Capitol

Politicians and reporters were forced to evacuate or fled to safer parts of the building, and the mayor imposed a 6 p.m. ET curfew for the entire D.C. area during the incident.

“Democracy is not automatic – it takes work every day. We have this in Canada because Canadians make it possible. Canadians expect their political leaders to protect our precious democracy by how we conduct ourselves,” Trudeau said.

He added that this democracy “didn’t happen by accident” and “won’t continue without effort.”

“We must always work to secure our democracy, and not give comfort to those who promote things that are not true or give space for hate and extremism,” Trudeau said.

2:07
What Trump’s final days in office mean for Canada

What Trump’s final days in office mean for Canada

The violence sparked a slew of resignations from members of U.S. President Donald Trump’s team, as well as calls for him to be removed from office with just two weeks remaining before Biden’s inauguration.

Trump has said he doesn’t plan to attend the inauguration. The last time an outgoing president has skipped the incoming president’s swearing-in was when Andrew Johnson missed the ceremony 152 years ago.

Trudeau previously reacted to the violence as it was ongoing on Wednesday, expressing “concern” and adding that he hoped “things will calm down.”

“The American democratic institutions are strong and hopefully everything will return to normal shortly. We’re going to continue to do what we need to do to make sure Canadians are well served in our relationship with the United States regardless of how things unfold,” Trudeau said on Twitter on Wednesday.

“Democracy must not be intimidated. The violence must end,” Singh said in a Wednesday tweet.

Trump did finally acknowledge he had lost the election to Biden in a Thursday video, which he released on Twitter.

“A new administration will be inaugurated on Jan. 20,” Trump said in the video. “My focus now turns to ensuring a smooth, orderly and seamless transition of power. This moment calls for healing and reconciliation.”

By Friday morning, he had returned to directing all-caps tweets at his supporters – after having been locked out of his account for 12 hours on Wednesday as a result of tweets that appeared to incite the rioters.

“The 75,000,000 great American Patriots who voted for me, AMERICA FIRST, and MAKE AMERICA GREAT AGAIN, will have a GIANT VOICE long into the future. They will not be disrespected or treated unfairly in any way, shape or form!!!” Trump wrote in the Friday tweet.