At first blush, it seems pretty clear: members of the Royal Family are to remain above the political fray.

But is it always so cut-and-dried? And is it ultimately possible to suss out what the royals may think politically, even if they are trying to keep their views to themselves?

“At the core of the British constitution is the ‘cardinal convention,'” Craig Prescott, a constitutional expert at Bangor University in Wales, said via email.

“This is the constitutional requirement that the Queen always acts on the advice of the government.”

Government is carried out in the name of the Crown, Prescott said, “but … the role of the monarch is a formality.”

“By extension, this applies to all members of the Royal Family, and … they also are expected to be above day-to-day politics.”

Still, the Queen has the right to be consulted, and can express her views to the British prime minister of the day and other government ministers, something she can do in her weekly audience with the PM (now occurring with Boris Johnson over the phone, courtesy of COVID-19).

“These discussions are strictly confidential,” said Prescott. “This means that it’s difficult to know much about the Queen’s views on politics, although one of her former private secretaries, Lord Charteris, suggested ‘that the Queen prefers a sort of consensus politics rather than a polarized one.'”

That’s not to say there hasn’t been great interest over the years in trying to suss out what the Queen thinks — right down to wondering if her choice of dress or hat might be a subtle signal.

Members of the Royal Family “definitely exist on a political spectrum themselves, but it’s not supposed to be that easy to figure out,” said John Fraser, author of The Secret of the Crown: Canada’s Affair with Royalty, and founding president of the Institute for the Study of the Crown in Canada. “You were never supposed to be able to find out how right-wing the Queen Mother was, for example.”

These days, there’s been speculation about the political stances of Prince Harry and his wife, Meghan, Duchess of Sussex, who are living in California after stepping back from the upper echelons of the Royal Family. Much attention focused on comments they made recently about voting in a video released in connection with Time magazine’s list of 100 of the world’s most influential people.

Those comments, Prescott said, are in contrast to comments made by the Queen that have been seen by many in a political light.

“Her comments before the Scottish referendum ‘about using your vote wisely’ were widely interpreted as being against independence.

“Similarly, in 2019, the Queen made comments calling for ‘common ground’ and respecting those who hold a different point of view. This was widely interpreted as a coded comment on Brexit.”

It all reflects consensus politics, Presscot said. “On both occasions, it’s hard to believe that the Queen was acting entirely without government advice, but she was willing to make these carefully chosen comments.”

Harry and Meghan’s recent comments about voting “in and of themselves may seem inoffensive, and in isolation actually hard to disagree with,” Prescott said.

The problem, he said, is the context in which the comments were made. Looking at U.S. politics from the U.K., it appears polarized, “making any intervention fraught with difficulty.”

“Given the views of the Sussexes on a whole range of issues, it is not hard to see where the Duke and Duchess stand on the political divide.”

For Prince Harry in particular, Prescott said, “it does appear to be ‘meddling,’ as he remains a British citizen and is ineligible to vote in the upcoming [U.S.] election.”

Fraser isn’t so sure it matters much, particularly given Harry isn’t a working member of the Royal Family anymore.

“He’s not any longer an important figure in terms of the constitution, in terms of the actual work of the Royal Family. He’s out of it. He’s like the Hollywood personality now,” Fraser said.

Whatever Harry may say, Fraser doesn’t expect we’ll see his elder brother, William, making similar comments, particularly given his position in direct line to the throne.

“He understands the role he has to play. The weight of non-political tedium is on his shoulders already,” said Fraser. “It’s not on Harry’s. Harry’s gung-ho to say what he thinks, but you won’t hear it from William.”

Taking a shot for the environment

When Prince William formally launched what has been billed as the biggest environmental prize ever this week, there was little in the way of criticism.

It was a far cry from how his father was received three or four decades ago when he was trying to rally attention for threats he saw to the natural world.

At the time, Prince Charles was roundly criticized. Sometimes he was mocked for speaking to plants. After he gave a talk about plastics and other waste, the heir to the throne recalled, he was “considered old-fashioned, out of touch and ‘anti-science’ for warning of such things.”

The contrast in reception reflects changing times and views on the environment, and also the longstanding interest royals have taken in the issue.

The Earthshot Prize will award 50 million pounds in a search for 50 solutions to the most serious environmental problems by the end of the decade.

In an interview with the BBC, William said the launch of the prize marks the point at which he takes up the charge of environmental campaigning from Charles.

“I feel it’s my responsibility now,” he said.

William joined forces for the Earthshot Prize with broadcaster David Attenborough, who has a longstanding interest in the environment and involvement with the Royal Family on the issue.

“Royal philanthropy often addresses complex challenges that take generations to solve, and the decades of advocacy by members of the Royal Family for protection of the environment and endangered species follows this pattern,” said Carolyn Harris, a Toronto-based royal author and historian.

Attenborough’s involvement with the Royal Family on environmental issues was also front and centre in a recent video that offered a rare glimpse — and a rare chance to hear the voices — of the three children of Prince William and Kate, Duchess of Cambridge.

William and Kate, who have been vigilant in protecting the privacy of Prince George, Princess Charlotte and Prince Louis, posted the video that gave the youngsters a chance to put questions to the 94-year-old environmentalist.

George, 7,  wondered what animal might become extinct next. Charlotte, 5, likes spiders and wondered if Attenborough does, too. Louis had a relatively simple question about Attenborough’s favourite animal — or “amimal,” as the two-year-old put it. (Turns out Attenborough is partial to monkeys, and would pick a puppy over a kitten.)

Sir David Attenborough, we’ve got some questions for you…🌍🕷️🐒 <a href=”https://t.co/MTQ68WnOrt”>pic.twitter.com/MTQ68WnOrt</a>

Camilla Tominey, associate editor of the Telegraph newspaper and a longtime royal correspondent, wrote that “the no-frills footage paints a picture of ‘normality,’ reflecting William and Kate’s efforts to give their children as grounded an upbringing as possible.”

She also said the video follows a steady stream of photographs of the children during the pandemic lockdown, “which have helped to cement their place as the House of Windsor’s ‘First Family.'”

Harris, the royal historian, also saw a reflection in the video of current times, and how physical distancing and avoidance of large gatherings have become the norm for everyone.

“The conversation with David Attenborough was an opportunity for the Cambridge children to be visible to the public during a year when the usual royal events such as Trooping the Colour or royal weddings do not feature the extended Royal Family coming together.”

The video, it seems, has found its fans: it’s been viewed 2.6 million times.

Even though Queen Elizabeth may be scrupulous about keeping her political views to herself, there’s no doubt politics was front of mind for those organizing her trip to Canada during her Silver Jubilee year.

Elizabeth, who was marking 25 years on the throne, and Prince Philip landed in Ottawa for a six-day visit on Oct. 14, 1977. They arrived in a country caught up in a crisis of national unity and the spectre of Quebec separatism.

Watch: The Queen attends a state dinner in Ottawa: 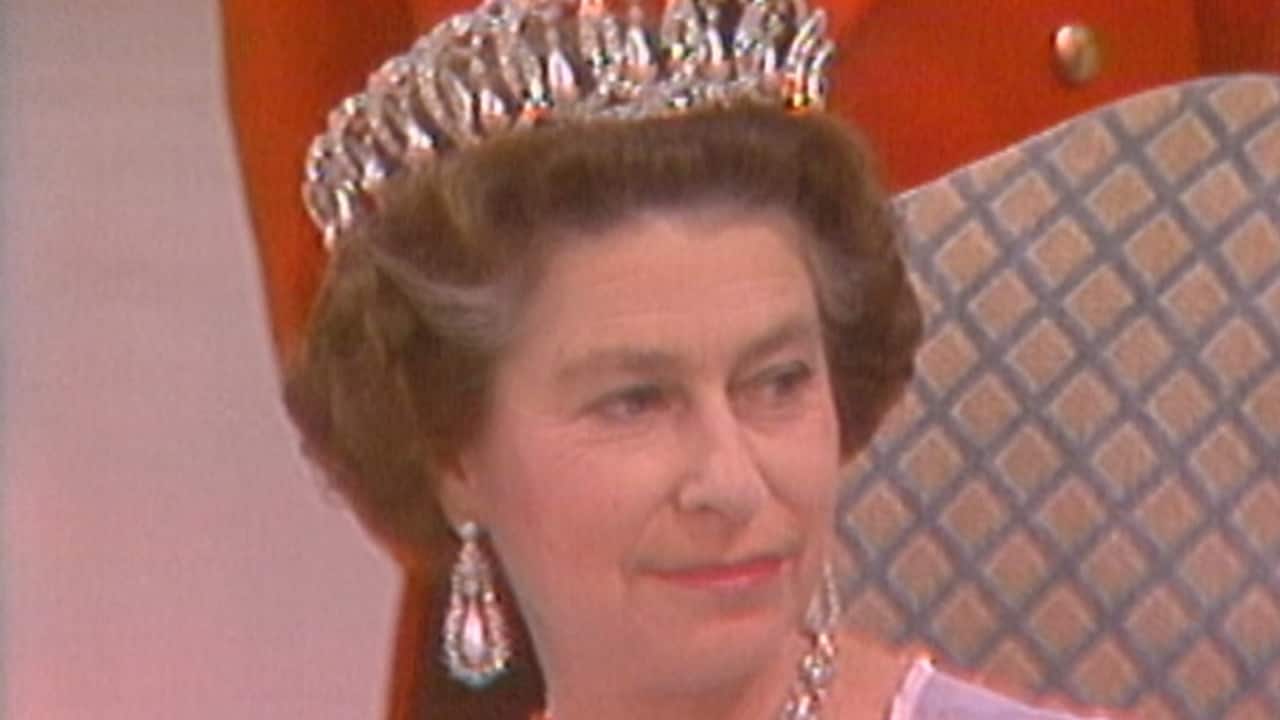 In 1977, Prime Minister Pierre Trudeau offered some remarks at a state dinner, before the Queen made formal remarks to the guests at the dinner. 3:35

In addition to reading the speech from the throne, Elizabeth delivered a speech at a state dinner that had been drafted by Canadian officials.

“In a world divided by differences of colour, race, language, religion and ideology, the Canadian experience stands out as a message of hope,” she concluded in the speech that was broadcast on television across the country. “My prayer is that you will continue to offer this message to mankind.”

“There are many absolutely incredible women working from the grassroots up, whose life experiences, as well as their capabilities, more than qualify them for a voice at the table. Many are unheard heroines that keep peace within and across communities.”

— Sophie, Countess of Wessex, during a virtual conference this week on the role women can play in preventing and resolving conflicts, peace negotiations and peace-building in the Arab world.