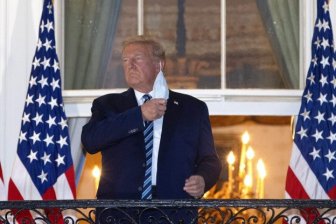 Featuring Maya Rudolph as Harris, Beck Bennett as Pence, Kate McKinnon as debate moderator Susan Page and guest Jim Carrey reprising his role as Joe Biden, the parody began with a jab at Pence’s evasive answers around the topic of coronavirus.

“Now, you were in charge of the coronavirus task force, and since you took charge, over 200,000 Americans have died — how do you explain that?” asked McKinnon.

“Well Susan, I’d like to begin by stalling hard — we’re in Utah, wow,” responded Bennett’s Pence. “What a magnificent state. Even though their basketball team is named after my greatest fear — jazz. I yield the remainder of my time.”

Rudolph’s Harris came out swinging against the U.S. government’s response to the spread of the virus. She also riffed off of the facial expressions Harris had while Pence was speaking.

“Now I’d like to hear the vice president’s response and while he speaks, I’m going to smile at him like I’m in a T.J. Maxx and a white lady asks me if I work here,” said Rudolph, her face scrunching up in apparent annoyance with Bennett’s answers.

Next came jabs about Harris and Biden’s views on fracking, as well as the topic of Donald Trump’s health following his coronavirus diagnosis last week.

“Unfortunately for you then, the president is doing amazing thanks to his team of terrified doctors. As you heard from his primary physician, Dr. Handsome Liar, Trump is in peak physical condition,” said Bennett, in reference to the doctor’s evasive remarks on the president’s health.

Watching the debate at home on his couch, Carrey’s Biden then decides to take a teleporter to the stage in order to “save the soul of this nation.”

The teleporter happened to contain a fly — much like the plot of the 1986 Jeff Goldblum movie.

Panning back to the debate, a fly lands on his Pence’s head — which happened during the real event— but it’s revealed to be a Biden-fly hybrid buzzing around and exclaiming “let me at em…bzzzz….let me at ’em,” with its fist up.

A second fly on Pence’s head, portrayed by Kenan Thompson, reveals himself to be a reincarnated version of Trump supporter and American businessman Herman Cain, who opposed mask mandates and later passed from COVID-19 in July.

“Flies, anything you’d like to add?” asked McKinnon, who closed the debate.

“Be afraid, be very afraid,” said Carrey’s fly, puking white liquid out of his mouth. WHO has recorded 65 cases of coronavirus at Geneva HQ, internal email reveals – National 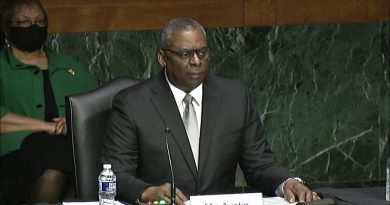