When wildlife expert Rebecca Dmytryk realized that Gerald the turkey was making a bee-line right for her, she knew exactly what to do.

“I’m like, okay, I’ll play into this [attack] because that’s what I want,” she told As It Happens host Carol Off.

So Dmytryk hunched over and acted like a frail older woman — the finicky fowl’s victim of choice.

“He was going to attack me, but I got him first,” she said.

On Thursday Gerald, a grumpy turkey that has been menacing residents in Oakland, Cali. for the past seven months, was finally captured by Dmytryk and relocated outside the city.

For about two years, Gerald made his home in the neighborhood around Morcom Rose Garden, a 3.2-hectare (8-acre) municipal garden with thousands of flowers.

He had many people who loved him and fed him his favourite snack, sunflower seeds. But then, Dmytryk said, COVID-19 hit.

“There’s speculation whether COVID caused people to stay in more and that let him feel like he really owned the place. So when people started to venture back out, he was a little more aggressive than usual,” she said.

One resident described in a complaint to Oakland Animal Services how Gerald attacked her, reminding her of Jurassic Park.

“I swear I was getting flashbacks to the velociraptor scenes in Jurassic Park as he was cooing at me, sizing me up … And before you laugh at all this, I’m telling you he was relentless!” the resident wrote.

if anyone needs an update on the “feral turkey terrorizes Oakland” story, animal services was unable to catch him despite using nets and decoys so he continues his REIGN OF TERROR – today someone posted this pic of him attacking them <a href=”https://t.co/RHLKWPiu9E”>pic.twitter.com/RHLKWPiu9E</a>

“It was weird. I mean, from a distance you could see him pick out a victim,” she said.

Gerald became such a nuisance that the city had to shut down the park, and in June, the California Department of Fish and Wildlife announced that Gerald would have to be euthanized.

That caused an outpouring of support from local residents for the bird. More than 13,000 people signed a petition online to save Gerald’s life.

But even after the department agreed that he would be caught and relocated, Gerald evaded capture for months.

Then, Dmytryk was called in. She runs the Wildlife Emergency Services with her husband, Duane Titus, and they specialize in the humane catch and release of wild animals.

On Thursday, Dmytryk showed up to the garden with blueberries, sunflower seeds and a net gun.

First, she drew Gerald in with the snacks. The plan was for her husband to deploy the net gun, but it wasn’t working. So he ran back down the road to the truck.

I’d never grabbed a turkey by the scruff before, but it worked.– Rebecca Dmytryk

“All of a sudden, I saw him stop looking at the blueberries so attentively and focus on me. And he had this just look. And I’ve been working with wildlife for over 40 years, so I knew,” Dmytryk said.

That’s when she had the idea. She hunched over, acting frail and timid.

Gerald kept getting closer, until Dmytryk could grab him by the scruff of the neck and safely contain his wings.

“I’d never grabbed a turkey by the scruff before, but it worked,” she said, although she strongly warns people not to try this without the proper animal behaviour training.

She points out that it was human behaviour that caused Gerald to be so aggressive.

“You don’t feed wildlife because if you do, it’s going to cause trouble. They’re going to become habituated,” she said.

Dmytryk took Gerald to a private property outside Oakland where he has a stream, other turkeys to play with, and most importantly no people to attack.

“He’ll be fine and hopefully not get into too much trouble,” she said.

Written and produced by Sarah Jackson. 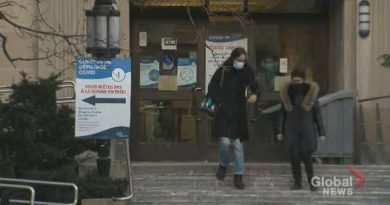